Travel the Scenic Landscapes of India with the Film I (Ai) 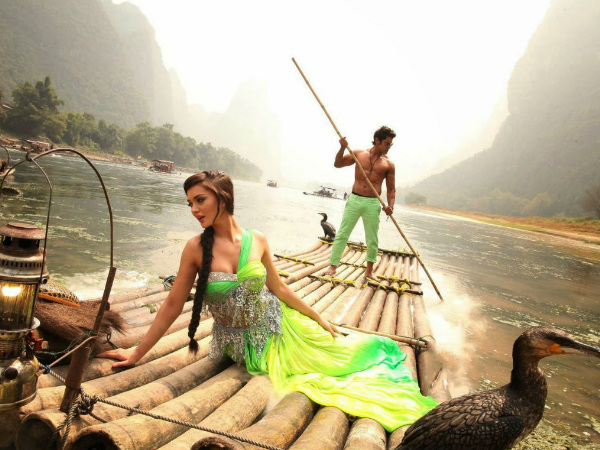 The first long weekend of the year 2015 is here and to add to the excitement it also saw the release of the much awaited Tamil movie I (Ai) across the country. You must be wondering what makes this movie worth mentioning? Well, many portions of it were shot in various parts of India and the unit has gone out of their way to capture the beauty of these places.

So if you are a die hard Vikram fan and have already watched the movie then the next thing that you should have on your bucket list is to head to these places where it was shot. With the long weekend here it is the perfect way to pay homage to the Super Star and also enjoy while you are at it.

Jog Falls also called Gerosoppa Falls or Joga Falls is the second highest plunge waterfall in India after the Nohkalikai Falls of Meghalaya. Located in the Shimoga and North Karnataka border this waterfall is certainly a marvellous sight to see. It is created by the Sharavathi river and drops a distance of 830 ft. The falls consists of four segments namely - Raja, Rani, Rover and Rocket. The beauty of this view is enhanced by the lush green surroundings. There are several vantage points here from where one can witness the Falls. Getting down to the base of the falls and then climbing back can be a tough and tiring trek. Also, certain portions of Vikram's latest blockbuster I (Ai) were shot here. A excuse good enough for every fan of his to come visit this place!

Pollachi, located in Coimbatore district of Tamil Nadu, is the second largest town. Its location near the Western ghats not only provides for an extremely pleasant weather throughout the year but also charming scenic beauty. The picturesque location has become a favourite among filmmakers with over 1500 movies being shot here in the past few years. This place boasts of various temples, dams and wildlife sanctuaries and has been a major tourist hub. It was also recently a shooting location for Vikram's latest movie I (Ai). Need any more reasons to visit here?

Chennai, the capital of Tamil Nadu, is a major metropolitan as well as cosmopolitan city that is situated on the Coromandel Coast. It is one of the most important cities in south India as well as in the country in terms of commerce, culture, education as well as economics. In fact, Chennai is popularly known as the cultural capital of South India. Chennai stands out in its ethnicity that is so unique that it is often a desired destination for tourism. Tourists throng the various hill stations, beaches, temples and wildlife here. Those who travel here are left mesmerised by its timeless beauty. For all you Vikram fans out there it will not come as a surprise but many scenes including those around the harbour in his latest movie I (Ai) was shot here.

The most popular hill station in Tamil Nadu is also one of the best places to visit in South India in August. At an elevation of nearly 7000 ft, Kodaikanal boasts of cool temperatures and picturesque surroundings. You will be entranced by the grassy meadows, the rays of sunlight that struggle to penetrate through the tall eucalyptus trees, scenic lakes and much more. There is much to see in and around Kodaikanal, you can start with the Berijam Lake, Pillar Rocks, Pine Forest, Silver Cascade, Dolphin's Nose, Bear Shola Falls, Coaker's Walk, etc. Also, don't miss out on trying the home-made chocolates here. Also it was here that certain portions of Vikrams latest movie I (Ai) was shot.

Mysore is the cultural capital of Karnataka and the second largest city in the state. It is a famous tourist destination in South India known for its opulent and royal ambience. The old world charm of Mysore city along with its well-manicured gardens, heritage mansions and shady avenues leave an everlasting memory in the minds of its visitors. There are many attractions around the city, namely the Mysore Palace, Karanji Lake, Lalitha Mahal, Mysore Zoo and more. It was recently one of the shooting location for Vikram's mega movie I (Ai).

Jodhpur, the city of eternal brightness, was once the capital of the Marwar Kingdom and is today the second largest metro in the state of Rajasthan . This city has got two nicknames, ‘Sun City' and ‘Blue City' for its unique characteristics. The name 'Sun City' is given after the bright, sunny weather of Jodhpur whereas, the name ‘Blue City' is derived from the blue painted houses located in the surroundings of the Mehrangarh Fort. The bright and colourful culture of the city, set against the stark background of the Thar desert is a rewarding experience for every traveller crossing these lands. Jodhpur is a popular tourist destination in Rajasthan with its many forts, places, lakes and other monuments of historic and cultural value. In recent times this place received much prominence as the shooting of the Tamil movie I (Ai) starring Vikram was done here.

Comments
Read more about: jog falls chennai kodaikanal jodhpur pollachi mysore
Other articles published on Jan 15, 2015
We use cookies to ensure that we give you the best experience on our website. This includes cookies from third party social media websites and ad networks. Such third party cookies may track your use on Nativeplanet sites for better rendering. Our partners use cookies to ensure we show you advertising that is relevant to you. If you continue without changing your settings, we'll assume that you are happy to receive all cookies on Nativeplanet website. However, you can change your cookie settings at any time. Learn more
Change Settings Continue