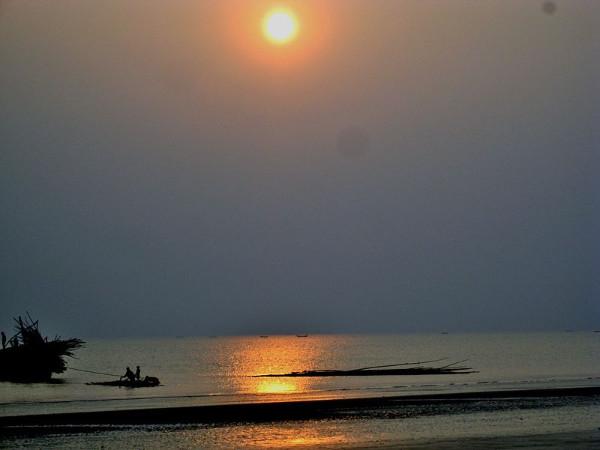 The aura of a river basin is tranquil and scenic. Since the rivers have been given a status of goddess, they are also the Hindu religious places in India. These river deltas and islands have a great significance. Sagar Island in West Bengal is one such place which is known as a pilgrimage spot as well as a tourist destination.

Sagar Island is located at the confluence of River Hooghly (Ganga) and Bay of Bengal. This place is also known as Ganga Sagar, where thousands of pilgrims congregate every year to take a holy dip in the river.

It is said that a sage named Kardam Muni had made a pact with Lord Vishnu. According to this pact, Kardam Muni would enter the marital life only if Lord Vishnu promise to be born as his son. Kapil Muni, an incarnation of Lord Vishnu, was born to Kardam Muni.

It so happens that King Sagar's sacrificial horse gets stolen it disrupts his worship. So, he sends his 60,000 sons to find the horse. The thief of the horse is none other than Indra, who would have hidden it in Kapil Muni's ashram.

King Sagar's sons reach this ashram and find the horse there. They mistake Kapil Muni to be the thief and abuse him. Kapil Muni, angered by their act, burns them into ashes with his special powers.

Upon knowing the incident, King Sagar requests Kapil Muni to have some compassion and asks him revive his sons. Finally, Kapil Muni agrees with a condition that he will restore all the princes only when Goddess Parvati comes down to earth as River Ganga. So, River Ganga enters the earth and all the princes are revived.

Note: Hooghly River is a distributary of the Ganges. Hence, it was traditionally called as Ganga River in West Bengal. It is also known as Muriganga River.

How To Reach Sagar Island

Sagar Island is around 111 km from the city of Kolkata. The visitors have to reach Harwood Point and then take a ferry to reach the Sagar Island.

Comments
Read more about: unique travel ideas west bengal
Other articles published on Feb 4, 2017
We use cookies to ensure that we give you the best experience on our website. This includes cookies from third party social media websites and ad networks. Such third party cookies may track your use on Nativeplanet sites for better rendering. Our partners use cookies to ensure we show you advertising that is relevant to you. If you continue without changing your settings, we'll assume that you are happy to receive all cookies on Nativeplanet website. However, you can change your cookie settings at any time. Learn more
Change Settings Continue