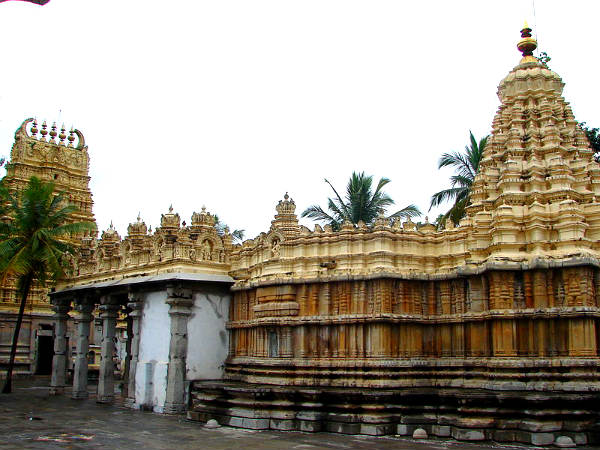 "City of Palaces", Mysore is one of the best place you can travel this Dasara. Situated 143 km from the capital city, Bangalore, Dasara celebrations in Mysore has always attracted tourists from round the globe. Glorious festivity amidst glittering exhibitons and exaggerated processions are awaiting Navratri enthusiasts in Mysore. While you travel to this beautiful city on the eve of Dasara, some sacred and holy temples of Mysore can also be included in your itinerary.

Temples in Mysore are some of the best attractions of the "Sandalwood City". Some of the sacred temples were constructed by the royal families while others having mythological and legendary significance since ages are being renovated and worshipped. Majority of the temples are located around Mysore Palace and the fort. Dedicated to various gods and godesses, these sacred temples in Mysore will make your trip holier and pious this Dasara.

Here are some of the renowned and sacred temples of Mysore which are a must visit while you are in Mysore.

Also known as Chamundeshwari Temple, this temple resides on Chamundi Hills which is around 13 km from the heart of Mysore city. The presiding deity of the temple is Goddess Chamundi who was worshipped by human and animal sacrifices in bygone years. The gopuram has artistic Dravidian style of architecture. Tourists can avail bus facilities from City Bus Stand Palace, Hardinge Circle and Gandhi Vana.

This is one of the oldest temples in Mysore which houses the deity of Nambinarayana, one of the forms of Vishnu. Goddess Lakshmi and Lord Venugopala also reside in this temple. An inscription in the temple dates back to 1851 which focusses the renovating period of the temple during the reign of Krishnaraja Wodeyar III. Interesting legends surround the temple which make it a must visit spot in Mysore.

This temple constructed in the year 1829, is dedicated to Lord Krishna. Krishnaraja Wodeyar III presented 40 statues of gods, godesses and saints which were made of bronze. The temple also houses the statue of the maharaja and he is also worshipped along with the deity. Art aficionados will have wonderful time exploring the picturesque 19th century paintings on its walls.

This ancient temple perches on top of Chamundi Hills. It was of much prominenec before Chamundi Temple gained importance. Mahabaladri or Mahabala Thirtha was the other name of Chamundi Hills which was coined after the name of the presiding deity of the temple. Dating back to 950 AD, it was one of the important religious spots for the Hoysalas. Sapta Matrikas, Bhairava, Nataraja and Parvati are the gods whose images are found in this temple.

Varahaswamy Temple is the other name of this temple which follows the architectural style of the Hoysalas. Intricate and artistic doorways, pillars and towers attract many tourists and photographers. Paintings on the walls are dedicated to Ramayana and Bhagavata. Chikka Devaraja Wodeyar is supposedly the ruler under whose reign the temple was built. Inscriptions of 12th-13th century are found on the outer walls of the temple.

Three-eyed Shiva or Trinayanesvara is the presiding deity of this temple. Having a Dravidian architectural style, the temple houses deities like Dakshinamurthy, Kshetrapala, Kumara and Surya. It is located on the bank of Doddakere or Devaraya Sagar. A stone image of Kanthirava Narasaraja Wodeyar is also found within the temple premises. Several other lingas and shrines are worshipped here which are renowned for being a part of some legend or myth.