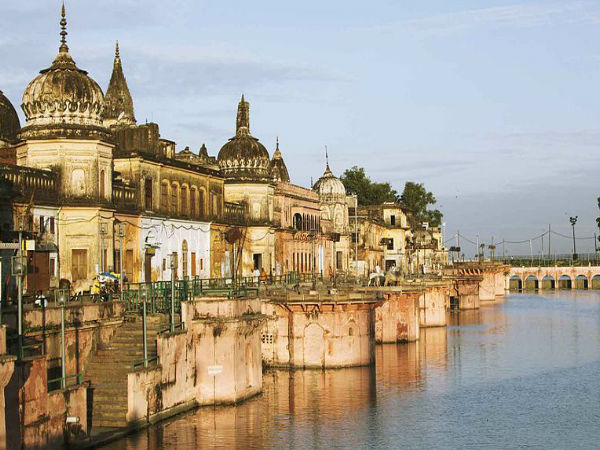 Ramayana, one of the largest and ancient epic in World literature, is a vital part of the Hindu religious canon.Being India's beloved epic, Ramayana narrates the story of the triumph of good over evil while it also portrays the life of Lord Rama, his ideals and his greatness ,who is the seventh avatar of the Hindu God Vishnu.

In this series, let's take a tour through the religious Places Visited By Lord Rama in India.A Visit to These Places Connected To Lord Rama And Ramayana will enable you to relive the epic Ramayana! First among the catalogue is the ancient city of Ayodhya, Birthplace Of Lord Rama . Located at the banks of Sarayu river in Uttar Pradesh , a stroll through the divine kingdom of Ayodhya which got sacred with the footprints of Lord Rama, will gift you with a divine encounter.

Ayodhya by the riverside of Sarayu- PC : Ramnath Bhat

Ayodhya is believed to be one of the seven most sacred places in India and is one of the Major Religious Destinations in India. Called as Saket in ancient times, Ayodhya finds mention in several Hindu legends and stories including the epic Ramayana. The Atharva Veda has described Ayodhya as a 'city built by Gods and being prosperous like paradise itself'. The ghats of Sarayu bring alive a deeply spiritual experience. Ayodhya has many principal Hindu religious spots which are considered Godly by the Hindu religion.

Ramkot is the most frequented religious site in Ayodhya which provokes intense sentiments and emotions among the pious followers. An ancient citadel of Ramkot , located on an elevated ground in the western part of the city, marks the cite of Lord Rama's fort that once existed. This the same place where Lord Rama was bestowed with the kingdom and kinship of 'Koshala' empire.

Hanuman garhi is a must visit during your trip to Ayodhya. This temple for Lord Hanuman is a gigantic structure in the shape of a four sided fort with circular bastions at each corner. The carvings in the temple are mesmerizing. The faithful believe that all their wishes are granted with a visit to this holy shrine.

Situated near Hanuman Garhi, Kanak Bhawan is another important temple in the city of Ayodhya. The temple is popularly referred as Sone-ka-Ghar because of the famous images of Lord Rama and Sita wearing gold crowns. Because of this very reason, Kanak Bhawan is frequented by flocks of pilgrims every year.

Ayodhya is an abode of many chief religious spots in India. Ayodhya evokes inspiration and emotion at the same time. As it is the Birthplace Of Lord Rama, the city is attached to the Indian psyche and has remained inseparable. An Ayodhya trip might be something which your soul had been long yearning for!

How to reach : Nearest Airport is the Chaudhary Charan Singh Airport at Lucknow which is 134 km away. Ayodhya/Faizabad are connected to various parts of the country by many trains.

Do not forget to visit the Makan-Malai restaurant during your visit to this epic city of Ayodhya to try their delicacies.