Nativeplanet
»
Travel guide
»Do you know about the Picturesque Valley of Pachmarhi in Madhya Pradesh?

Do you know about the Picturesque Valley of Pachmarhi in Madhya Pradesh? 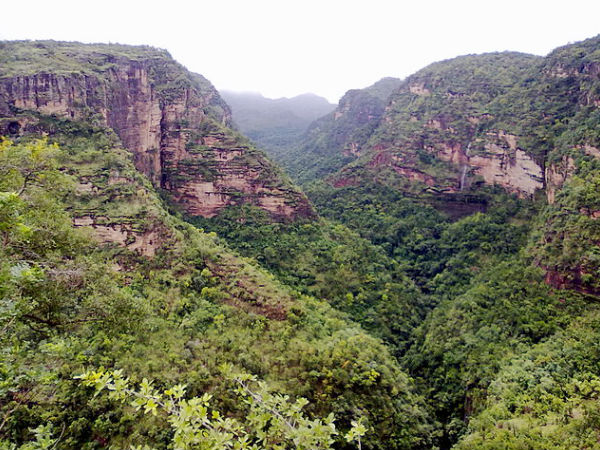 Pachmarhi is the one and only hill station of Madhya Pradesh and is popularly called as 'Satpura Ki Rani' or 'The Queen of Satpura'. It is located in the Satpura range at an elevation of 1,110 mt. In the earlier days this valley was the capital of the tribal dynasty of the Gonds. In 1857 Captain James Forsyth of the British Army discovered the Pachmarhi hill station and introduced it to the world.

Pachmarhi has many places to offer to its visitors. This saucer shaped hill station is famous for its ancient caves, monuments, waterfalls, natural beauty, forest and the flora and fauna. Here is a guide to the valley town of Pachmarhi.

Click Here to avail Rs. 300 OFF on Return Flights.

Apsara Vihar is a small water fall with a shallow pool below it. It is also known as the Fairy Pool and is an ideal place for swimming, diving and natural open bath. The pool is not too deep and hence families with children find this a nice place for fun. This pool is located near the Pandava Caves. Travellers coming here can admire the beauty of nature that surrounds them here and also relax in in the soothing water of the pool.

The Bee Falls is a beautiful waterfall in Pachmarhi that is also called as Jamuna Prapat. It provides drinking water for the Pachmarhi Valley. It is an enchanting cascade that flows with a beautiful buzzing sound. Those who love adventure can cross the stream and reach another bathing pool called Rajat Prapat through the Bee Falls. Adventurous trips from the Apsara Vihar to the Rajat Prapat through the Bee Falls is exciting for youngsters. The Bee Falls will not escape from the memory of those who have visited it once. The solitude and natural beauty will hold the notice of any onlooker.

The Pandava Caves are a group of five caves located in a small hillock in Pachmarhi. It is believed that the Pandavas during their period of exile took shelter in these caves. The caves are small in size and the largest one with enough air circulation is called as Draupathi Kuti or Cave. The most congested and dark cave is called as Bhima Kothari or Cave. The archaeological evidences claims that the caves where constructed by Buddhist monks during the 1st century as they used them as a place of refuge, but, the myth of the Pandavas is more popular among the locals. Tourists visiting this place can explore the caves and also see the many inscriptions etched into the walls of these caves.

The Bada Mahadev Cave is located almost 10 km away from Pachmarhi and is a shrine of Lord Shiva. The 60 ft long cave has shrines dedicated to Lord Brahma, Lord Vishnu and also Lord Ganesha inside it. As per local beliefs, the Bada Mahadev Cave is the place where Lord Vishnu killed Demon Bhasmasura taking the form of Mohini, a celestial beauty. There is water dropping from the cave continuously which gets collected in a pool. It is believed that taking bath in this pool is supposed to cure you of all evils. It is a beautiful place to explore nature and spirituality.

The Christ Church at Pachmarhi was built by the British in the year 1875. The architectural style of this church is a mix of European styles with elements of Irish, French and British architectural styles in it. The stunning glass panes of the church were imported from Belgium. It is a place of worship and also a place to observe stunning western architecture. Visitors throng here throughout the year to see the beautiful European styles used to design the church.

Harper Cave is a small cave at Pachmarhi that has beautiful old paintings on its walls. It shows the picture of a man playing the musical instrument; Harp, and hence it got the name. Though much is not known about the history of this cave, travellers coming here can explore it and marvel at the paintings.

How to Reach Pachmarhi

By Air: The nearest airport to Pachmarhi is the Raja Bhoj Airport in Bhopal. The airport is approximately 195 km from Pachmarhi. One can get frequent flights to Delhi, Bombay and Gwalior from this airport.

By Train: The nearest railway station is at Pipariya that falls on Jabalpur rail line on the Howrah-Mumbai track. It is 47 km from Pachmarhi. It is well-connected with major cities like Kolkata and Mumbai.

By Road: Pachmarhi is well-connected by road from the neighbouring places in Madhya Pradesh. Private buses as well as local buses run at regular intervals from Bhopal, Pipariya or Nagpur to reach Pachmarhi. Luxury buses are also available to come to Pachmarhi.