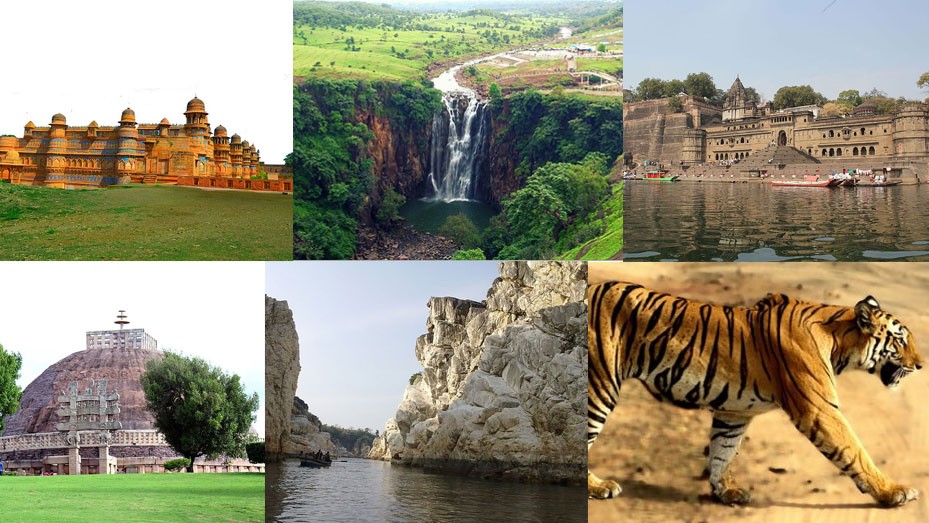 Madhya Pradesh, popularly known as the Heart of India, is the second largest state. The history of this state, its geographical location, its natural beauty, its cultural heritage and the people, make it one of the best Indian tourism destinations. Bhopal being the capital is popularly known as the City of Lakes. Madhya Pradesh tourism offers all aspects of tourism for tourists to explore and indulge. From watching tigers at the Bandhavgarh National Park to wowing the architecture of the temples at Khajuraho, one can discover the real India.

The central location of the state, as well as the rich diversity in nature, make it a perfect tourist destination. The high mountain ranges, the wild green forests with the rivers and lakes provide a beautiful harmony between the various elements of nature. The rivers Narmada and Tapti run parallel to each other and between the two mountain ranges of Vindhya and Satpura. The rich and diverse flora and fauna and the natural beauty of the state are the highlights of Madhya Pradesh tourism.

Madhya Pradesh has witnessed the rule of many rulers of different dynasties. From the Mauryas, the Rashtrakutas and the Guptas in the ancient period to the Bundelas, the Holkars, the Mughals and Scindias, it has seen the rise and fall of about fourteen dynasties. The rule of different rulers came in different forms of art and architectural styles.

The tribal culture of Madhya Pradesh is an important part of Madhya Pradesh tourism. The Gonds and the Bhils are the main tribes residing there. The tribal art and handicrafts are a major source of attraction for the tourists.The folk music and dance is the artistic heritage of the country.

The variety of cuisines in Madhya Pradesh forms a vital part of Madhya Pradesh tourism. The food majorly comprises of Rajasthani and Gujarati cuisines. The capital city of Bhopal is famous for its royal food, like the seekh and shami kababs. Jalebis and cashew barfis are available in almost every sweet shop and in all the places in Madhya Pradesh. However, the food habits differ in every part of the state. The Khajuraho Dance Festival at Khajuraho and the Tansen Music Festival at Gwalior are famous worldwide. The Madai Festival and the Bhagoriya festival are the two most popular tribal festivals held in the villages by the tribal communities.