The Temple City of Bhubaneswar, Odisha 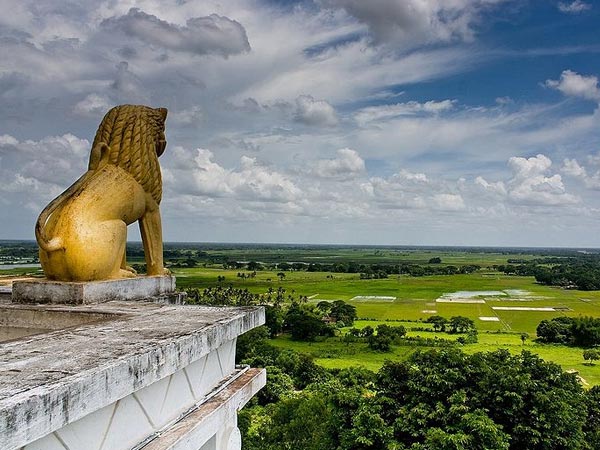 The capital city of Odisha, Bhubaneswar has its origins more than 3000 years in the past. A well-planned city, Bhubaneswar is on the fast-lane of development and is emerging as an information and technology hub. The beautiful city has many ancient temples that are renowned for their architectural finesse and artistic beauty. Over 1000 temples are said to have decorated the city in the past, this has earned Bhubaneswar the tag of 'The Temple City of India'.

Among the most popular tourist destinations in eastern India, the city of Bhubaneswar has much to offer travellers. You can explore the many interesting temples, caves, city of ruins and wildlife here. Take a look at some of the top places to visit in Bhubaneswar.

Another place to visit in Bhubaneswar is Dhauli, located at a distance of 8 km on the river banks of Daya. Speculated to be the place where the Kalinga war was fought, Dhauli is an important place for Buddhism. Travellers can admire the beautiful Shanti Stupa or peace pagoda here as well as other Ashokan edicts in the surrounding.

The oldest temple in the city, the Lingaraja Temple is a popular tourist attraction and a must-visit place in Bhubaneswar. The largest temple in the city it is considered to be over 1,100 years old. The architecture is also unique, and an outstanding example of Hindu temple structures. Built in Deula style, the sandstone structure stands strong to this day. It consists of four divisions; the sanctum, the assembly hall, festival hall and hall of offerings. A unique belief associated with the temple is that of a secret stream that flows below the temple and fills the nearby Bindusagar Tank. The waters here are said to have curative properties.

One of the many attractions in Bhubaneswar is the Nandankanan Zoo, spanning an area of over 990 acres, the zoo also has a botanical garden and the Kanjia lake. The large zoo houses over 1,660 animals including the exotic White Tiger, Asiatic Lion, Lion-Tailed Macaque, etc. The zoo is popular for successfully breeding endangered and vulnerable animals. It is a great outing for families with children.

A popular attraction in Bhubaneswar is the set of natural and man-made caves present at Udayagiri and Khandagiri. There are a total of 33 caves in both the places, and has many sculptures and wall carvings. Situated amidst greenery, the important caves to be observed are the Hathigumpa cave in Udyagiri and Ananta cave in Khandagiri that showcases lovely figures of women and various motifs. The place is also filled with monkeys expecting a few treats from the visitors!

Among the popular temples of Bhubaneswar is the ancient 10th century temple of Muktesvara Deula. Also known as the 'Gem of Odisha Architecture' this beautiful temple built in Kalinga style has a prominent Torana or gateway that is replete with sturdy pillars and exotic carvings. The temple is small but built with a great eye for details. The sanctum boasts of many sculptures showing women entwined amorously with nagas and naginis.

Among the things to do in Bhubaneswar is a visit to the Chandaka Elephant Sanctuary that also houses the pleasing waters of Deras Dam. Set in the Chandaka forest and surrounded by small hills, the sanctuary is home to many animals, primarily the elephant. The variety of avian life is enhanced by the water bodies such as the Deras Dam and Jhumka Dam. Visitors can observe the wondrous wildlife from the many watchtowers such as Kochilaberana and Ambilo. Some towers even offer stay options for the night.

Said to be over 2,500 years old, the ancient city of Sisupalagada continues to mesmerise travellers visiting Bhubaneswar. The city has long disappeared leaving behind interesting ruins. A great place for history buffs and explorers. The old stone walls, steps and other ruins are a stark contrast to life in the city.

Bhubaneswar has interesting cuisine on offer, such as the fish gravy and rice called machha, snacks on the streets such as gupchup and mouthwatering sweets like chhena gajaand chenna poda. After eating to your heart's content, you can go shopping for a variety of products in Bhubaneswar markets. Popular things to buy are fabrics with applique work that include colourful bags and home decor products. You can also buy traditional paintings and lovely silver filigree jewellery.

By Road: Bhubaneswar is well-connected by a network of roads. The NH-5 that connects Kolkata and Chennai also connects Bhubaneswar to major cities in the country.

By Rail: Bhubaneswar is a major railhead junction and has regular and direct trains connecting the city to most major destinations in the country.

By Air: The Biju Patnaik Airport located at a distance of 5 km from Bhubaneswar city has domestic flights to major cities like Mumbai and Delhi. International travellers will need to take connecting flights from Kolkata (448 km) or Visakhapatnam (435 km).