PK in Rajasthan – Places To Visit! 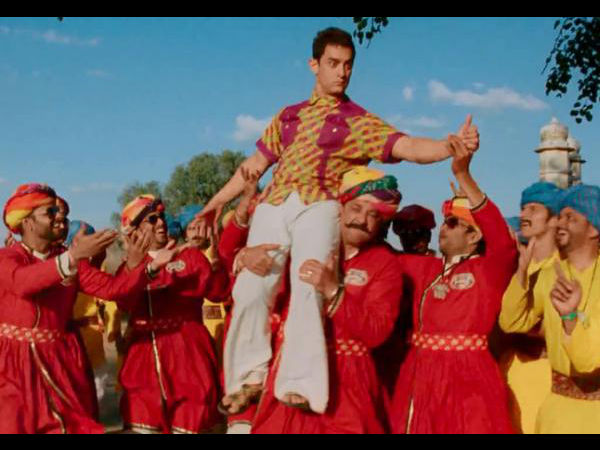 The latest Amir Khan movie PK is among the best things to look forward to this holiday season. The movie has generated immense word of mouth in its first few days of release. Be it the posters, the songs or the movie itself, one major feature that people are noticing and appreciating are the various locales of Rajasthan where the movie has been filmed. From attending royal weddings to PK's Amir Khan standing in the nude on a deserted railway track somewhere in the lesser known desert regions of Rajasthan, the movie is a testament to why the state is so great for travel this time of the year.

Not just PK, but various other movies have been shot in the fascinating lands of Rajasthan. And unlike what you may believe, not all are shot only in the popular destinations of Jaipur or Udaipur. While the exact destinations in Rajasthan where PK was shot have not been revealed by the filmakers yet, plenty of other films have been shot across its many cities, towns and villages. In fact, Rajasthan has many lesser known destinations that are sure to delight an avid traveller. Take a look at the ten lesser travelled but popular filming locations of Rajasthan as observed in several movies.

Explore heritage stays, hotels and resorts in any destination across Rajasthan.

Bikaner located in the north-west region of Rajasthan is an interesting travel destination with its iconic attractions, such as the Laxmi Niwas Palace and the Karni Mata Temple or the Rat Temple as it is otherwise popular. The many palaces in the region have been converted to luxurious heritage hotels. So if it is a royal experience you are seeking, there is no better place to head to than the stunning Bikaner.

Surrounded by the Aravalli Mountains, Ajmer is located to the west of Jaipur and is a popular spiritual destination. The ancient city boasts of attractions that is a perfect amalgamation of old and new. The city has lakes such as the Lake Foy Sagar, Anasagar Lake, temples such as the Nareli Jain temple, Digambara Jain temple, etc. The city also boasts of few iconic buildings that sport attractive architecture such as the Mayo College. Travellers can explore the city and also head to the nearby Pushkar to enjoy more attractions.

Once known as Brijnagar, the scenic city was once the capital and princely state of Jhalawar. The lesser known city has many attractions that travellers can explore such as the Jhalawar Fort, Rein Basera, Chandrabhaga Temple, Gagron Fort, etc. The city is located at a distance of 87 km from Kota airport and can also be reached by train and bus.

The city of Kota is located on the banks of River Chambal and is famous for many things, it is a popular educational city, agriculture and industries also thrive here. But more importantly Kota is a unique travel destination. It has much to offer travellers from gardens and palaces to lakes and temples. Places you must visit include the man-made Kishore Sagar, Jag Mandir Palace, Garadia Mahadev Temple and Kota Fort. The city is also famous for its lovely Kota sarees.

If you always wanted to explore the Great Wall of China, start right here in India with the Kumbhalgarh Fort. It has the second-longest continuous wall in the world. The Mewar Fort is also a World Heritage Site and the region is the birthplace of the iconic king Maharana Prathap. The fort is lit up beautifully every evening and is now open for public viewing. Another amazing feature of the fort is that the complex has within it over 300 ancient Jain temples and the remaining are Hindu temples.

Located in the Pali district of Rajasthan, situated in the valleys of the Aravalli Range, Ranakpur is incredibly scenic. Surrounded by hills, the village is green and stunning. It is most popular for the lovely marble Ranakpur Jain Temple, dedicated to the worship of Lord Adinatha. The extensive skill of the artisans of yore is clearly seen in the Maru-Gujara style of architecture. Another lovely little temple dedicated to the worship of the Sun is also located here and managed by the royal family trust.

The charming city of Bundi in Rajasthan is located at a mere 35 km from Kota and offers many picturesque sights. It is surrounded on three sides by the Aravalli Range and offers many attractions such as the Star or Taragarh Fort, the Bundi Palace, Nawal Sagr, Nagar Sagar stepwell and Dabhai Kund. Lined with house painted a mesmerising blue, the streets of Bundi by themselves are exciting to explore. In fact, the city has many more attractions, most unfortunately are in ruins today. It is said that Bundi had over 50 stepwells, but few are maintained to this day.

Located in the southern most end of Rajasthan, Dungarpur is a less travelled destination in the state. The place has many attractions ranging from natural beauty to historic structures. Do not miss some of the exquisite temples here such as the Dev Somanth temple, and palaces such as the Juna Mahal. You can also visit the Udai Bilas Palace and many other havelis, museums and libraries here.

The popular hill station of Mount Abu falls on the border region of Rajasthan and Gujarat. the wondrous hill station in the otherwise arid state of Rajasthan is even referred to as the 'Oasis of the Desert'. The hill station is home to bountiful natural beauty, including rivers, lakes, waterfalls, and forests. Travellers can take time to explore the Mount Abu Wildlife Sanctuary, Jain Dilwara Temples, Achalgarh Fort, Nakki Lake, etc.

Among the popular filming locations in Rajasthan is the Chittorgarh Fort. The mesmerising scene from Yeh Jawani Hai Dewani, as the lead characters of the movie experience a poignant moment observing the sunset at the Chittorgarh Fort in Rajasthan makes you want to pack your bags immediately. It is the largest fort in India and also a UNESCO World Heritage Site. The sprawling tourist attraction by itself will easily consume a day's worth of exploring.