Off-Roading To The Splendid Dudhsagar Falls 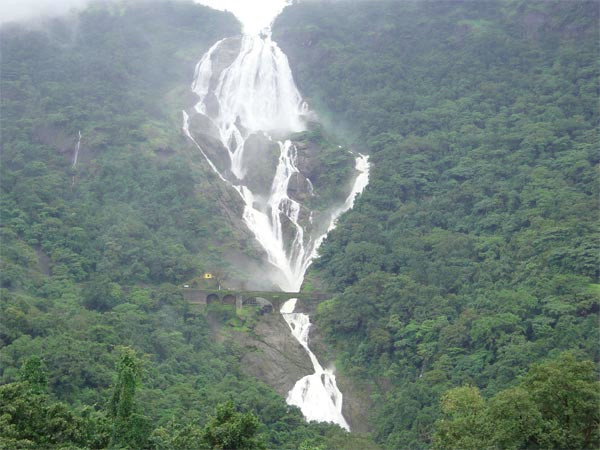 I am a movie buff and I love travelling. So when I'm watching movies, especially Bollywood films, I'm mentally making a note of the amazing places they are shot at. And whenever I get a chance to travel, I'm more or less ready with a destination list on my mind.

Four Other Beautiful Waterfalls You Must Visit In Goa

One lazy Sunday afternoon the movie 'Chennai Express', was playing on the TV. Suddenly my friends and I realised that it was shot at Dudhsagar Falls in Goa! We had been planning to visit the place for a long time and this movie was like a reminder for that procrastinated plan. Well, no prize for guessing, we immediately planned for it at the next travel opportunity we got.

Located on the Goa-Karnataka border, Dudhsagar Falls is the 4th tallest waterfall in India. Cascading from the high peaks in the Western Ghats, Dudhsagar is truly a magnificent waterfall. Translated in the local language, the name means ‘Sea of Milk'. It truly lives up to the name with the arrival of monsoon when the waterfall overflows with sheer force, gushing down the steep, emerald slopes of the untouched tropical forests.

The falls is located inside Mollem National Park and is surrounded by lush forests and rich biodiversity. Although a famous spot for adventurers and trekkers, it is quite an offbeat destination given the challenges involved in reaching as well as being there. It is not easily accessible. But as they say, ‘outside the comfort zone is where the magic happens'.

During the monsoon, June through October, the waterfall is fed by pouring rains. Visiting the falls during the monsoon is risky due to the slippery paths, swollen rivers and flooding. As the rain subsides, the place gets a complete makeover. The landscape is washed green and the glorious fall cascades into green water pools. It is a breathtaking sight to behold. Therefore the best time to visit Dudhsagar is between October and April.

Dudhsagar is 60 km from Panjim, that is located on the southern bank of the River Mandovi, which emanates from the Dudhsagar Falls. If you happen to fly in to Goa, distance from Dabolim airport to Dudhsagar is 70 km via Ponda, which is the nearest city. You can take a local bus from the highway or Ponda. All the interstate buses halt at Mollem, where the Park office is located.

Off-Roading To The Falls

A local Taxi Union arranges jeeps and SUVs to take the visitors to the falls. Only 6 people can be accommodated in a single jeep and hiring the entire vehicle costs around Rs. 2800. If you are traveling solo or in a smaller group, pay Rs. 500 per head and join another group to divide the cost.

A nominal entrance fee of Rs. 20 per person is charged by the Forest Department at Kolem, with separate charges for cameras. No tickets to the falls are issued after 3 PM. Also, it is mandatory to collect life jackets before heading to the falls.

Off-Roading To The Falls

We collected the life jacket by paying Rs. 30 each and boarded the jeep. The jeep ride started getting adventurous as the path went through a dense forest, criss-crossing streams and rivulets. The driver was a chatty person and told us interesting things about the forest and the birds and animals found here.

After offroading on the dirt road and a beautiful forest trail for about 45 minutes, the jeep halted. Brimming with excitement, we followed the driver, who guided us to the falls. After a few steps, we finally reached the falls. Glancing at the roaring waterfall up close was an absolute thrill, and we couldn't wait to get into the water.

The driver had told us to be back in one and a half hours, as every extra hour thereafter would cost us additional Rs. 200. So without wasting a single second, we quickly stepped into the cool water that pooled at the bottom of the impressive falls.

The water was refreshingly cool. We were back to being excited 5-year old with all the giggling, splashing and playing in the water. We soaked ourselves in the soothing water to our heart's content. Keeping in mind the fatalities that had taken place here, based on what the driver had told us, we were cautious. It is advisable not to dive here, with the lack of knowledge about the water.

A few of us stepped out to explore the surroundings. I spotted a few birds that I had never seen before. The sound of the jungle was alluring. The air was crisp. I sat on a rock listening to the melody of the forest combined with the sound of the roaring Dudhsagar, falling gloriously from the high rocks.