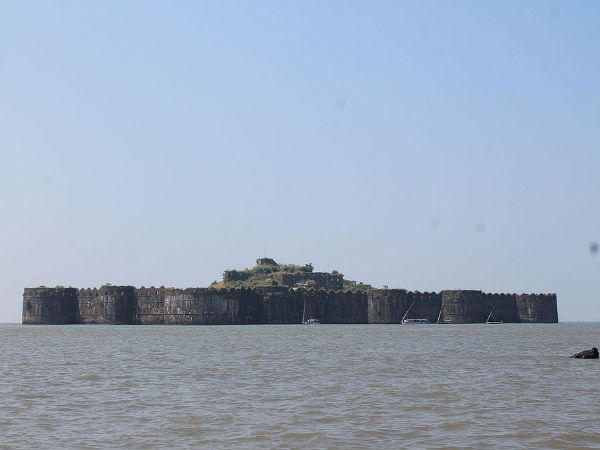 One curiosity will always be there around certain old structures; without any modern technologies, how did they even build such massive buildings? The tales of these marine forts are similarly mysterious and interesting in Maharashtra.

Most of them remain in a ruined state but as stronger as any new buildings. Some of these sea forts have a rustic charm that waits to be explored in many parts of Maharashtra.

In this modern age too, we cannot reach an island or a seaside place without proper water transport. Just imagine how it would have been in olden times? The seaside forts give us chilling moments when we look at the location where they are built. Well, evidently they were constructed to keep away the enemies!

A view of a massive black structure can be seen in the coastal village of Murud. A ferry ride from Rajapuri Jetty will take to one of the strongest marine forts in India. Murud-Janjira is a product of Nizamshahi Dynasty, which never failed to stop the enemies. Large cannons, natural lakes, ruined palaces can be found inside the fort. Murud-Janjira has a grandeur of its own which is a must visit for any avid traveller.

Alibaug Fort is one of the locations chosen by Chhatrapati Shivaji to acquire the Konkan Coast. It is a small sea fort which played a major role in defending against the British. Alibaug Fort, also known as Kolaba Fort is a monument and a popular tourist place in Alibaug.

'Suvarna; means gold and 'durg' means fortress; it was a pride of the Maratha Empire. The Golden Fort was also built for defence purposes. The ramparts of this grand fortress have stood the test of times. Interiors of the fort are not well-preserved, but it shows the architectural finesse and the techniques of the Maratha Navy in those times.

Compared to a few other sea forts, Sindhudurg Fort is in a pretty good condition; it stands strong off the Malvan shorelines in Maharashtra. There was a time when there were many residents inside the fort but slowly the population has moved out due the lack of facilities. However, Sindhurdurg Fort is also one of the grand plans of Shivaji Maharaj!

These marine forts are like jewels in the crown in the coastal line of Arabian Sea; a trip around these heritage sites will take you back to the ancient and jubilant Maharashtra.

Comments
Read more about: forts heritage travel alibag maharashtra
Other articles published on Jun 2, 2016
We use cookies to ensure that we give you the best experience on our website. This includes cookies from third party social media websites and ad networks. Such third party cookies may track your use on Nativeplanet sites for better rendering. Our partners use cookies to ensure we show you advertising that is relevant to you. If you continue without changing your settings, we'll assume that you are happy to receive all cookies on Nativeplanet website. However, you can change your cookie settings at any time. Learn more
Change Settings Continue