5 States That Offer The Spiciest Food In India 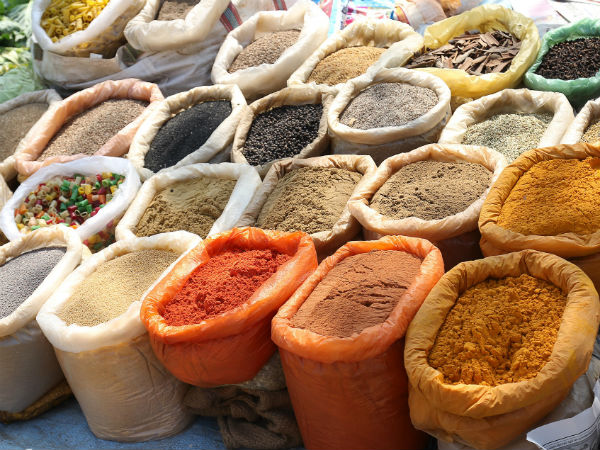 Indians love spicy food. We all know that, don't we? But there are some Indians who love it even more than the rest. Even though you can find spicy meals everywhere in India, some states have a distinct fiery level as compared to others when it comes to food.

While westerns may cry a river after a single bite, a typical Indian will always relish the spices and the flavours that our beautiful land offers. And why not? Studies have suggested that eating spices can lower your risk of heart diseases, cancer and diabetes. So why not just cry a river than die out of a disease? So today, we have decided to honour 5 of the spiciest states in India. We mean, the states that offer the spiciest delicacies in India.

The below list goes from average spice level to the spiciest level. By the time, you finish reading this article, we promise you'll want to go to all these states just to try and test what we have been talking about. Even though you are not much of a spice lover, you'd want to be adventurous and make some serious changes in your food picks.

Rajasthanis are known for their colourful handicrafts, the red buildings, their regal past and their food. Yes, food. Rajasthani menus are predominant by vegetarian meals, thanks to its diverse vegetarian population. The state's cuisine loves oil and spice. Some of spiciest meals in Rajasthan are gate ki sabzi, ker sangria ki sabzi and ker pickle.

Another spicy dish that Rajasthan is known for is laal maans. If you're a hardcore non-vegetarian and love spicy food, this one is for you. It is a thick mutton gravy cooked with spiciest chillies, mathania. Mathania chillies are produced in the city of Mathania in Jodhpur, Rajasthan.

The state is known to produce chillies and has a knack for creating some of the finger-licking pickles. If you're looking for oily, spicy and scrumptious food, look no more than Rajasthan. Each city in the state has a food speciality, but you'll always find the level of spice and oil uniform everywhere. There is something about Rajasthani food that, despite being so oily, is still soulful and delicious.

We are going from a low-level to high-level of spice here so next comes the capital of the country, New Delhi. New Delhi is known for its street food. We have known people making plans to visit the city just to eat the food. It is a foodie's paradise.

Over the years, many North Indians from different states have relocated to New Delhi, creating a cultural mix of food. New Delhi delivers a variety of buffets. It is fascinating to see how New Delhi's food is still intact and has grown over the years. If you love all things spicy, head to New Delhi and you won't be disappointed.

Delhi chaat is one of the most famous and liked dishes but there certainly are many other foods that you can try and quench your spice thirst. In case you're feeling adventurous and want to try a tongue-burning meal, try death wings.

God's Own Country has lived up to its exquisite title when it comes to its cuisine. It is home to some of the best lip-smacking foods. Needless to say, Kerala's seafood is bang on. And it is a non-vegetarian or shall we say seafood lovers' paradise? Kerala is known for its spicy curries. The lip-burning, tearing-inducing curries are the fancy of many spice lovers.

Its spicy chicken is one of the most popular spicy foods apart from Kerala fish and its dessert menu. You will see how the taste of spice varies through the Indian states and Kerala cuisine provides a very distinct flavour to its dishes.

Second last on the list is Andhra Pradesh. The state is known for producing Guntur chillies - one of the spiciest chillies in the world... Majorly non-vegetarian, Andhra's cuisine boasts of its eclectic mix of curries and fries. Starting with Guntur chilli vadas to mutton curries, Andhra has something for every kind of spice eater.

Andhra Pradesh is the Mexico of India because of its fiery spice levels. Even the types of rice meals have levels of spice in Andhra. We thank its royal roots. The Nawabi culture influences the culinary flavours resulting in red-hot meals.

Andhra people love the touch of spice in their food and if you love to experiment and want to be adventurous when it comes to food, look no more than Andhra. It is a paradise for spice lovers.

Nagaland is topping the spice level because people from Nagaland love their raja mircha. The beautiful Nagaland has a rich and diverse culture. The landscapes, beautiful scenery and the food, Nagaland has so much to offer to a fellow traveller. If you are going to Nagaland for the first time, don't forget to try some of its spiciest foods.

Good food is an integral part of Nagaland's culture and even though you are one of those who avoid spicy food, the food here will turn you into a spice muncher. Although known for their love for meat, Nagaland does have some of the most delicious and spicy vegetarian meals. It is interesting to note how the flavours change in different parts of Nagaland.

Comments
Read more about: food travel india culture explore
Other articles published on Jul 19, 2018
We use cookies to ensure that we give you the best experience on our website. This includes cookies from third party social media websites and ad networks. Such third party cookies may track your use on Nativeplanet sites for better rendering. Our partners use cookies to ensure we show you advertising that is relevant to you. If you continue without changing your settings, we'll assume that you are happy to receive all cookies on Nativeplanet website. However, you can change your cookie settings at any time. Learn more
Change Settings Continue