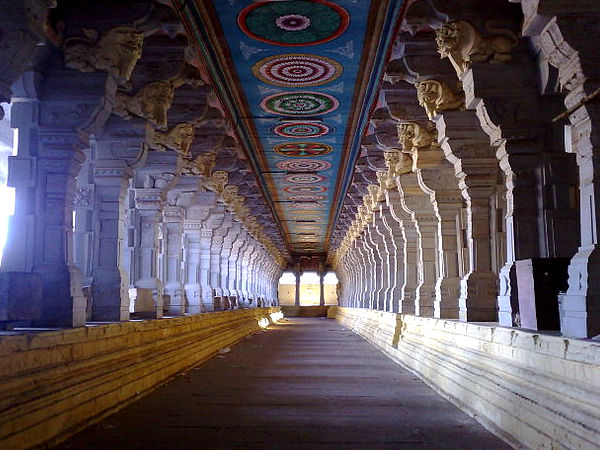 Rameswaram is one of the holiest cities in Tamil Nadu. The city is rich in its culture, tradition, heritage and history. Rameswaram gets its name from the Hindu God Rama, who is believed to have built a bridge here that leads to Sri Lanka, to rescue his wife Sita from Ravana, the King of Lanka.

Being one of the places to be visited during the holy Char Dham Yatra, Rameswaram also is known for its stunning temples and other attractions. Let us have a look at some of the famous temples in the city that are not to be missed!

The temple is not only a famous pilgrim spot of the city, it is also a major landmark of Rameswaram. Dedicated to Lord Shiva, the shrine is one of the 12 Jyotirlingas in India. The temple is believed to be built in the 12th century, and is known for its intricate and elaborate artwork and architecture.

The five faced Hanuman temple is another major attraction of Rameswaram. The temple has its mentions in Indian mythology. The shrines other than Hanuman that are worshipped here include that of Sita, Rama and Lakshman. It is believed that the souls of the deities are put inside the idols that are worshipped at the temple.

The Kodandaramar Temple, also known as Kodandaramaswamy Temple, in Rameswaram is another must visit temple of the city. Dedicated to Lord Rama, the temple is said to be the only historical structure that survived the massive cyclone that happened in Dhanushkodi in 1964. The temple also worships other deities like Lakshmana, Hanuman, Sita and Vibhasana. The temple is surrounded by sea and is a lovely attraction to visit.

This famous temple is dedicated to Nambu Nayaki Amman, the protecting Goddess of the region. Though the temple was first located in Dhanushkodi, after the cyclone in 1964 it got shifted to where it is located now. The deity is said to be powerful and devotees flock in to pray and get the problems in their lives solved.

How To Reach Rameshwaram?