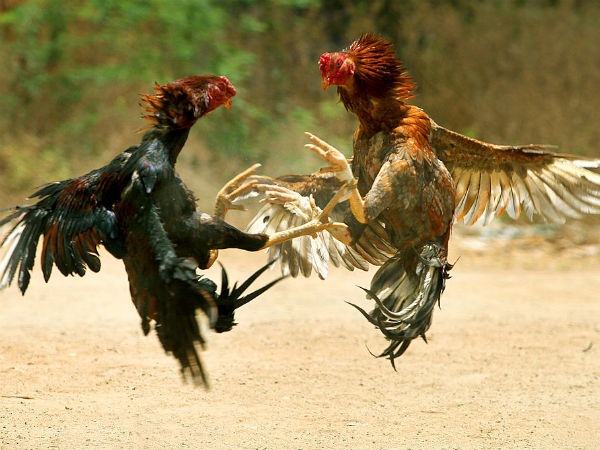 TV is entertainment and relaxation! It is very curious why some still like to watch an animal fight when we can easily get entertained. Well, maybe it is followed to preserve an age-old tradition that might diminish over time. The question is, do we have to hurt animals to entertain ourselves? Humans already make use of animals in all possible forms. So, is it necessary to use them for our amusement as well? It is not just in India; it is a global issue!

Thinking along these lines, let us know about some disputed animal sports in India!

Jallikattu is similar to Bullfighting in Spain; only thing is in Jallikattu many people try to control the bull at the same time.

Jallikattu is not only risky for people but also harmful to the bulls. Many deaths have happened over the years in the Jallikattu during Pongal Festival in Tamil Nadu and it stands as the top disputed animal sports in India.

Cockfight or the Rooster fight is not indigenous to India. It is a sport that exists across the world. In India, cock-fight is not just a sport but a gambling game.

In some parts of Tamil Nadu like Tiruppur and Coimbatore, even the cruel spiked heel fights also happen (a spike is attached to the roosters heel). Rooster Fight is still a famous animal sport across India. In South India Karempudi Village in Andhra Pradesh, Udupi in Karnataka and Kasaragod in Kerala also practise this sport. Many disputes have happened over this game.

Kambala is a buffalo race performed in a slushy paddy field. It is a popular traditional sport in Coastal regions of Karnataka. Usually, the landlords compete against each other in this annual event. Sadly, the buffaloes are whipped to make them run fast to win the game. Hence, many objections have been made by the animal lovers regarding this 300 -year-old sport.

Let us go to the flashback, some 10 or 20 years back! If you vaguely remember, some men used to bring bears and make them dance. It existed even in some cities where the hair of the bear was considered sacred. Now Bear Dance doesn't exist but even if it does; it is only in the remotest places.

Monkey Dance or Bandar aur Madari Ka Kartab is a familiar one in India. A trainer used to make the monkey dance and entertain the people. The trainers used to earn money from this. In today's age, this Monkey Dance hardly exists.

Fox Darshan is a ritual more than a sport. A village in Periyakrishnapuram had a tradition of a fox once a year during the Pongal Festival. Villagers find a fox, bring it to village and everyone dances and seek blessings. However, this ritual was banned some time ago.

Thanks to some animal organisations, today such games are at least not performed in many places. However, it is interesting to know about the traditional sports of India!

Comments
Read more about: guntur udupi salem coimbatore
Other articles published on Jun 20, 2016
We use cookies to ensure that we give you the best experience on our website. This includes cookies from third party social media websites and ad networks. Such third party cookies may track your use on Nativeplanet sites for better rendering. Our partners use cookies to ensure we show you advertising that is relevant to you. If you continue without changing your settings, we'll assume that you are happy to receive all cookies on Nativeplanet website. However, you can change your cookie settings at any time. Learn more
Change Settings Continue