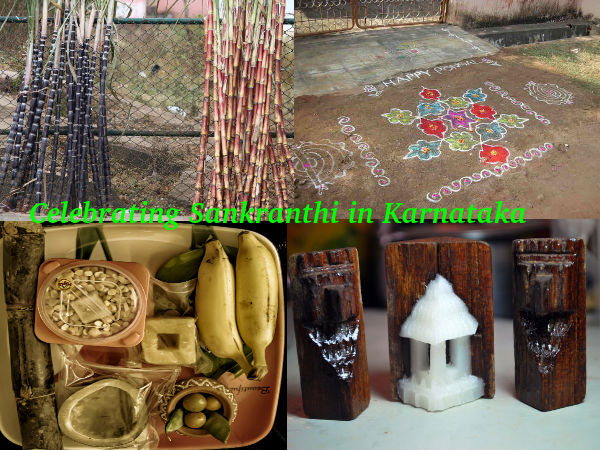 "Ellu bella thindu olle mathaadi" is the Kannada saying which will be making rounds on the day of Makara Sankranthi in Karnataka.

'Ellu' means sesame seeds and 'bella' means jaggery; the saying means 'eat the mixture of sesame and jaggery and speak good words'. Sankranthi 2019 is just around the corner and the state is gearing up for the festival.

Pongal is being prepared

Sankranthi is one of the big festivals in Karnataka. It is also the harvest festival when farmers celebrate the harvest of the season.

The Time of Sankranthi

Sugarcane is a main part of Sankranthi

Sankramana astronomically means when the sun enters the zodiac sign Makara (Capricorn). The auspicious time of Uttarayana begins from the day of the festival. Sankranthi is usually celebrated in January (14th-15th).

Houses are cleaned, mango leaves are tied to the entrance doors. People wear new clothes and pray to God. In rural areas, there is also a custom of offering prayers to the crops or the harvest.

A ritual of exchanging 'ellu-bella'

The most important part of the festival is the exchange of 'ellu-bella' (sesame and jaggery); women or children carry a plate with a small piece of sugarcane, a packet with the mixture of sesame and jaggery with a sugar candy (sugar mould made out of caramalised sugar). This tradition is known as 'ellu birodhu' in Kannada.

Women and children go from house to house exchanging these things. Even the hosts should give back the same items from their side. Metaphorically, it is the tradition of spreading happiness.

The festival is also the time for fun and games. Especially, in the rural areas, many events are organised. Rangoli competitions, kite flying competitions and other traditional sports like kusti are also organised in some rural areas.

Decorating the cattle is also one of the specialities of the festival. Farmers decorate their cows and oxen to showcase it to the people.

There is one other ritual 'making the cattle jump across the fire'. Farmers make their cattle jump across a big pit of fire. In Kannada it is called as 'Kicchu Haisodu'; it is an age old tradition which is followed during the time of Sankranthi festival.

Pongal (sweet rice) is the special dish cooked during Sankranthi in Karnataka. Other dishes like lemon rice, vegetable gravy's, vadas , payasa are also prepared. In villages, women cook Pongal in the fields and everyone sit together to eat the yummy sweet rice.

Sankaranthi is celebrated with different names in other parts of India: Pongal in Tamil Nadu, Uttarayan in Gujarat, Makar Sankranti in Maharashtra and Andhra Pradesh.

Each follow different traditions to celebrate the same harvest festival. However, the festivals are always an occasion to unite people. The time of Sankrama is definitely an occasion for people to rejoice, unite and also be thankful for the earth which provide crops.

Maranakatte is situated on the way to Kollur from Kundapura (22km) organises Sankranthi annual fair.

Maranakatte is known for Brahmalingeshwara temple which is located on the banks of a river called Brahmakunda. The legend says, after getting defeated by Goddess Mookambika, the demon Mookasura gained her blessings to turn into Brahmalingeshwara.

The fair happens for 3 days which starts before the day of Sankranthi. Various cultural programmes like Yakshagana, mythological plays are also performed during festival.