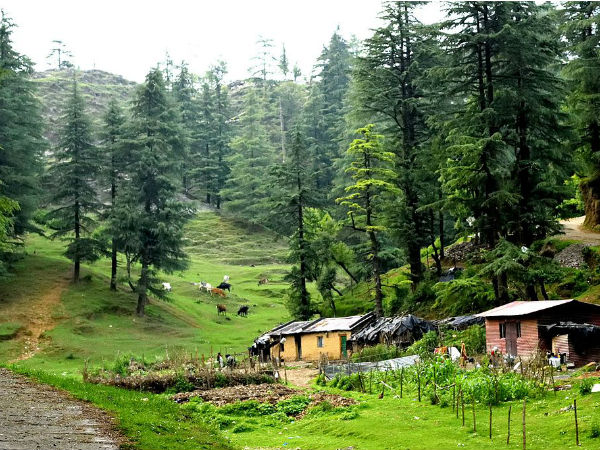 The building used to be an observatory to observe the mountains demarcating the boundaries of British India and measure the height of world's greatest peaks. As a tribute to his work and contribution to the Great Trigonometric Survey of India, the world's highest mountain, then known as Peak XV, was later named as Mount Everest after Sir George Everest.

Sadly the building with such an interesting history is now just an abandoned, poorly-maintained and crumbling house. But the place still holds a charm and draws many history buffs and adventurers. It offers spectacular views of the snow-clad Himalayan peaks and panoramic views of the Doon Valley. With its amazing weather and stunning views, you can easily spend about an hour or two at the summit.

The Everest House is located at a distance of approximately 8 km from the famous tourist town of Mussoorie and is a short drive away. A cab can be hired from the Gandhi Chowk at the end of the Mall road in Mussoorie to reach a place called Hathipaon, which is at the foot of the hill on which the building stands.

The road beyond Hathipaon is a bumpy and narrow dirt road. Many tourists hire a bike from Mussoorie town and ride up to the top. Often travellers and adventure seekers take up a mini hike on this relatively steep hill, which takes about 1.5 to 2 hours.

Mussoorie is known for its amazing weather and April to June is a peak season, given its pleasant climate. Winter is also an ideal time, especially for those who want to experience snowfall. Rainy seasons are best avoided as the place receives heavy rainfall.

The temperature is cooler by a few degrees in the Hathipaon and adjoining areas. It is advisable to visit the Everest House during the daylight, ideally between 10 AM - 6 PM, as the place and its surrounding area tends to get deserted after sunset.

At a distance of 7 km from Mussoorie, near Hathipaon, is another scenic place called ‘Clouds End'. Regarded as one of the oldest buildings in Mussoorie, it is a heritage hotel and forest resort. This scenic place is surrounded by thick oak and deodar forests and offers stunning views of the mountains and valleys.

Famously known as ‘Jwala Ji Temple', the Jwala Devi Temple is located around 8 km from Mussorie. Perched on the Benog hill, this tranquil place is surrounded by lush forests. It is one of the oldest temples in the area, and the place offers a picturesque view of River Yamuna and the Shivalik range. The temple can also be reached by trekking for 2 km from Clouds End.

Part of Rajaji National Park, Benog Wildlife Sanctuary is situated at 11 km from Mussoorie. Home to a myriad of colourful birds, Benog is a birdwatcher's paradise. The sanctuary is also famous for its rich flora and fauna. It can be visited between 7 AM to 5 AM throughout the week, and April to November is considered as an ideal time to visit.