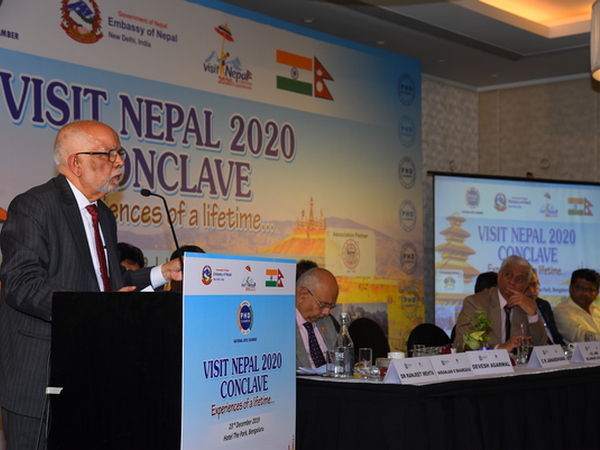 In order to explore the trade and investment opportunities with focus on Tourism in Nepal, the Punjab Haryana and Delhi Chamber of Commerce and Industry (PHDCCI) under the aegis of its India-Nepal Centre (INC) / State Development Council (SDC) and in association with the Embassy of Nepal, organised the Visit Nepal 2020 Conclave on December 23 at Bengaluru.

The Conclave hosted the official launch of Government of Nepal's 'Visit Nepal 2020 Campaign' and the discussions of key decision-makers' and stakeholders' from the government and industry, for positioning Visit Nepal 2020 to attract the visitors and investments from southern India to Nepal.

Ambassador K V Rajan, the Chair of the inaugural session, highlighted the importance of tourism as a major sector for Nepal, both keeping economic and socio-cultural considerations. He added that, "Endowed with favourable natural conditions, the tourism in Nepal is all set to gain new height with Visit Nepal 2020, a meaningful campaign started by the Government of Nepal."

The two sessions were followed by the Roundtable discussion, which hosted voices of policy-makers from the government and industry in southern India. NativePlanet.com was also part of the discussion and put forth some important points. ALSO READ: Siachen Now Open For Tourism.

The vision for Visit Nepal 2020 Campaign is grand and reflects Nepal's unwavering commitment to improving its competitiveness through investment, innovation, infrastructure development, regulatory reforms, new product offering, environment and wildlife conservation, and ensuring greater level of efficiency in service standards with the aim to develop tourism and economy in Nepal.

Significantly, the government declared 2020 as the Visit Nepal Year with a goal to achieve two million arrivals and daily spends of over US$75.

Remarkably, Visit Nepal 2020 Campaign is being positioned as a lifetime experience in a bid to establish Nepal as one of the world's most unique, experimental and valued destinations.

As per the government estimate, in 2018, Nepal received 11,73,072 international tourists, apart from the domestic travellers. The numbers of Indian travellers were the highest. The total share of foreign direct investment in tourism was 11.47 percent at Rs 23,855.50 million. The hospitality sector has shown immense promise with several international hotel chains having already entered or in the process of entering Nepal.

The Visit Nepal Year 2020 is set to achieve the Government of Nepal's agenda to recognise the potential and accelerate the development of the tourism industry in the years.

as the government creates ease of doing business for investors' and stakeholders' with incentives and subsidy provisions, supportive policies, political stability and sound governance.

PHDCCI, through its 1,30,00 members - and through its counterparts such Federation of Karnataka Chamber of Commerce and India (FKCCI), Bangalore Chamber of Industry and Commerce (BCIC), India Association of Tour Operators (IATO), Travel Agents Association of India (TAII) and South India Hotel and Restaurant Association (SIHRA), ensured an outreach to over half-million industry entities.