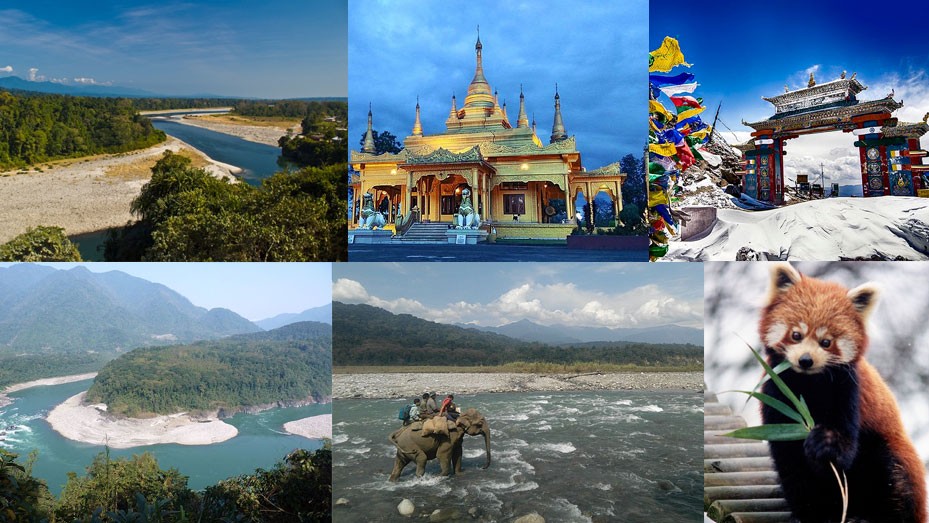 The blooming of orchids, the snow-clad, gleaming mountain peaks, the pristine valleys, the murmuring sound of the green leaves in the forests, the meandering sparkling streams flowing through the narrow strips of land, the chanting of the hymns by the Buddhist monks and its hospitable people; if you want to experience all this, visit Arunachal Pradesh. The rich and varied flora and fauna of the state will take you through a magical journey never experienced before.

The topographical features of the state play a key role in Arunachal Pradesh tourism as it provides a tourist to live and relive every beautiful aspect of nature; small or big, explored or unexplored. Located in the east of India, it is also known as the land of the rising sun.

The land is largely covered with the Himalayan mountain ranges and is divided into five river valleys namely the Siang, the Subansiri, the Kameng, the Tirap and the Lohit. The beautiful valleys are surrounded by lush green forests.

The Paradise Of Orchids

Arunachal Pradesh is rightly known as the Orchid Paradise of India. It has more than 500 varieties of orchids, that is half of the total variety found all over India. There are endangered and rare species of orchids. Orchid Research and Development Station has been established by the Government of Arunachal Pradesh. Itanagar, Sessa, Tipi, Darang, Roing and Jengging have orchid centres under the State Research Forest Institute and consists of both ornamental and hybrid varieties. Sessa Orchid Sanctuary is renowned for its huge variety of orchid species collection. The beautiful colours of the orchids paint the landscape of Arunachal Pradesh like the fine strokes of an artist.

Arunachal Pradesh tourism provides an exhilarating experience for all adventure enthusiasts. Trekking, river rafting and angling are the three major activities for all adventure lovers. Many places in Arunachal Pradesh are ideal for trekking. The best season for trekking here is between October and May. White-water River Rafting trips are organised for the tourists along Kameng, Subansiri, Dibang and Siang rivers. Angling festivals are also organised throughout the state for angling lovers.

People And Culture Of Arunachal Pradesh

The people of Arunachal Pradesh are simple and hospitable. There are more than 26 tribes residing in the state and local people are attached to their art and culture. Apatani, Aka, Bori, Galo, Adi, Tagin and Nyishi are the major tribes here.

A large number of languages are spoken here. Many tribal festivals are celebrated with dance and music throughout the year. The Losar Festival in Tawang is one of the most important festivals celebrated on New Year. The Dree Festival, Solung Festival and Reh Festival are also celebrated with great vigour and pomp.

Tourist Places In And Around Arunachal Pradesh

Arunachal Pradesh tourism takes you on a tour of a kaleidoscope of culture, people, nature and languages. Itanagar, the capital city, has tourist attractions like the Itanagar Wildlife Sanctuary and the Ita Fort. Other major tourist places in Arunachal Pradesh are Tawang, Along, Ziro, Bomdila, Pasighat and so on.