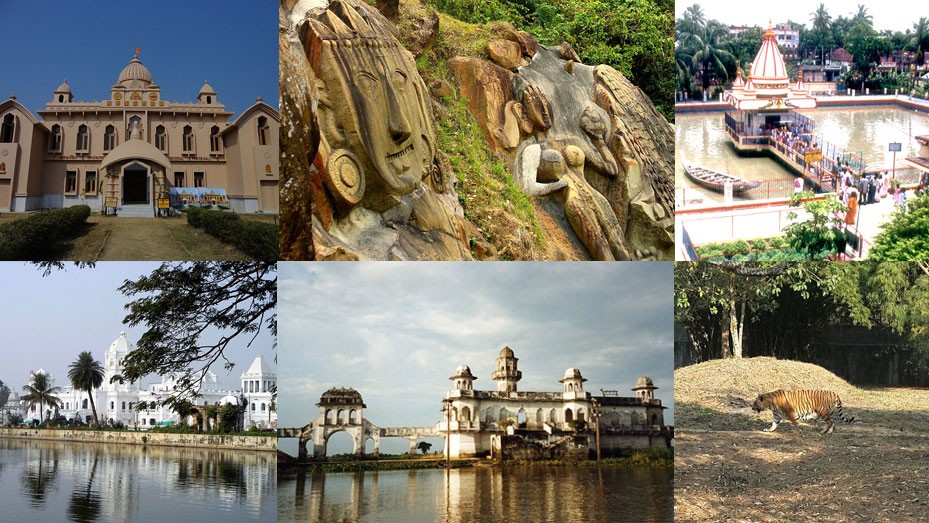 Adding to India's rich cultural heritage is one of its most exquisitely beautiful states - Tripura. With its inviting green valleys and hills, Tripura has made its mark as a major tourist spot of India. Being the third smallest state in the country, Tripura is in the form of a tiny dot situated between Northeast India and Bangladesh. This state is a harmonious mixture of nineteen indigenous communities, as well as non-tribal Bengali people. Also, Tripura has an interesting history and an abundant biodiversity to boast of.

Many historians and researchers have come up with varied theories on the origin of Tripura's name. Rajmala, Tripura's notable court chronicle, says that, many years ago, a king named Tripur ruled over Tripura and thus, the name. Modern Tripura was earlier ruled by the Tripuri dynasty, followed by the British rule, during which it was a princely state.

Tripura Tourism - A Look Into The Geography And Climate

Tripura is one of the seven contiguous states of Northeast India, which is renowned as the Seven Sisters. Mainly comprising of hills, valleys and plains, Tripura has five hill ranges separated by narrow valleys. At the extreme east there is the Jampui rangers, followed to the west by Unakoti-Sakhantlang, Longthorai, Atharamura-Kalahari and Baramura-Deotamura.

The weather of Tripura is influenced by its altitude and bears the features similar to most of the places in the hilly and mountainous regions. Tripura has a tropical savanna climate and comprises of four main seasons: winter - December to February, pre-monsoon season is from March to April and monsoon - May to September. Tripura’s temperature can drop down to about 10 degree Celsius during the winters and can go up to about 35 degree Celsius during the summers. The state experiences heavy rainfalls during the month of June.

Tripura And Its Rich Culture

Visitors will be able to witness a varied range of cultural events throughout the year, as Tripura is home to people from different ethno-linguistic and religious groups. Each tribe of this state celebrates a number of festivals and fairs, adding to them a touch of their own tradition.

Depending on the time of the year, visitors can expect to see some of the eventful festivals, such as Durga Puja, which occurs during the month of October, Diwali, celebrated right after the Durga Puja, Karachi Puja, the worship of fourteen Gods, which happens during the month of July and so on. Some of the other main festivals celebrated in Tripura are Garia Puja, Ker Puja, Ashok Ashtami Fair, Buddha Poornima, Pous-Sankranti Mela and the Wah (Lamp) Festival.

Apart from the grandly observed festivals, Tripura also boasts of having a rich art tradition in the form of dance, music and handicrafts. Different indigenous tribes belonging to Tripura have individual forms of traditional dance and music. The creativity and beauty of the Goria can be seen during the Goria Puja, being performed by the Tripuri and Jamatia people.

Similarly, Hojagiri is an impressive sight, where young girls of the Reang community dance by balancing themselves on earthen pitchers. In addition, Lebang, Mamita, Mosak Sulmani, Bizhu and Hik-hak are some of the other noted dance forms of Tripura.

Moreover, the tribes of Tripura make their own locally acclaimed musical instruments, such as the sarinda, chongpreng and the sumui, alongside manufacturing a range of handicrafts, furniture and utensils and decoration materials making use of bamboo and cane.

Tripura Tourism - Tourist Places In And Around Tripura

With its pollution-free air, great weather and interesting tourist places, Tripura can be an ideal spot for anyone to visit. It is a perfect combination of religious spots and scenic places for the visitor to revel at. Tripura also has a vast spread of evergreen forests and a fair share of aquatic resources. Once the visitors are here, they can be sure that they will be treating their eyes to the charm of this place.

Being the capital city of Tripura, Agartala has a lot to offer in terms of tourist places. Temples with rich archaeological histories like the Jagannath Temple, the Umamaheswar Temple and Benuban Bihar/Buddha Temple can be spotted here. Also, one can enjoy looking at different species of animals housed at Agartala's Sepahijala Zoo. For the young travellers, Agartala has the Rose Valley Amusement Park.

Apart from Agartala, Tripura also has other tourist attractions, such as Dhalai, Kailashahar, Unakoti and Udaipur. While Udaipur caters to the needs of pilgrims, with temples like the famous Tripura Sundari temple and the Bhuvaneswari Temple, Kailashahar has the Choudoo Devotar Mandir and its beautiful Tea Estates to impress one and all.

So what are you waiting for? Pack your bags and get ready to experience the allure of Tripura. You will not return disappointed.