Nativeplanet
»
Travel guide
»You Must Not Ignore These Temples In Coimbatore

You Must Not Ignore These Temples In Coimbatore 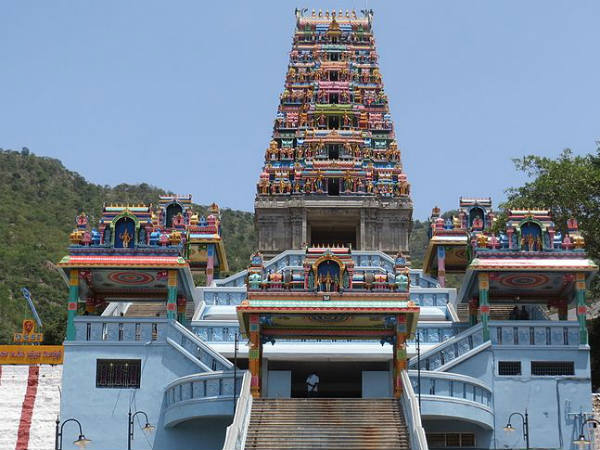 Located in the state of Tamil Nadu, Coimbatore is a beautiful city which is popular amongst all kinds of tourists, ranging from pilgrims to history lovers and architecture enthusiasts to nature lovers. On account of the presence of innumerable spots where you can get lost in the ecstasy of a delightful aura, Coimbatore should be on the bucket list of every traveller, especially an unconventional one who always looks forward to carrying out the legacy of discovering new places.

Even though there is a lot to explore and unveil within the boundaries of Coimbatore, ranging from hills to monuments, you must not ignore its legendary temples which help in maintaining the overall charm of the city. So, when you are in and around Coimbatore, following are the temples which you must visit on account of their rich history and religious significance.

Dedicated to Lord Murugan, the son of Lord Shiva and Goddess Parvati and known as God of War, Marudhamalai Murugan Temple is located atop a granite hill at an elevation of about 600 feet and dates back to the 12th century. Undoubtedly, it is one of the highly revered temples in Coimbatore as it witnesses tourists and Hindu devotees in millions every year.

Being a part of the lush Western Ghats, the surroundings of this beautiful temple remain cool and pleasant throughout the year. Hence, it attracts several nature lovers and photographers too. The major reason behind its popularity amongst tourists coming from other states and towns lies in its peaceful environment.

Once you are within the compound of Marudhamalai Murugan Temple, you can certainly feel the beauty of a divine atmosphere as you tend to get lost in its godliness. You should not miss this undeniable beauty if you are looking for a serene place to spend a few relaxing hours. Apart from all this, you can also indulge in exploring the history of the temple.

An ultimate destination in Coimbatore if you are looking to find a peaceful and composed environment, Dhyanalinga is a yogic temple founded in the year 1999 by Sadhguru Jaggi Vasudev, a yog guru, and is a popular centre of meditation and yoga in the city.

You cannot find a better option than Dhyanalinga Yogic Temple if you have been seeking quintessential and absolute spirituality. You need to take a dip in the waters of Teerthakund before entering the meditative space in the temple. This activity is believed to purify your mind, body and soul.

Dhyanalinga Temple is also popular amongst architecture enthusiast due to its beautiful structural formation which comprises of a commendable dome and beautiful walls built out of bricks and mortar. Such is the magnificence of Dhyanalinga Yogic Temple that each and every corner provides its visitor with an essence of tranquillity. You cannot afford to ignore such an amazing invention of humans.

Another must-visit religious site in Coimbatore, Perur Pateeswarar Temple is one of the oldest temples in Tamil Nadu and is believed to have been established in the 1st century during the reign of Karikala Chola, who is considered as one of the greatest Chola rulers of all time. The temple is dedicated to Lord Shiva and is a famous pilgrimage centre in Coimbatore amongst Hindu devotees, especially Shaivites.

The vibrant atmosphere inside the temple is something for which you should consider visiting the temple. The entire atmosphere seems elevated with liveliness. You cannot find such an amazing environment everywhere in Coimbatore.

So, why to ignore this ancient beauty which can certainly help in maintaining a positive aura. Apart from exploring its atmosphere, you can also learn about the history of temple from the priests. The temple is also known for its splendid architecture and houses a beautiful golden statue of Lord Shiva in the form of Nataraja.

A beautiful instance of Tamil architecture, Masani Amman Temple is dedicated to Goddess Amman, a form of Goddess Shakti, and is located on the outskirts of the main city in a small town named Anaimalai. As it is one of its kind in the region, it is immensely popular amongst Hindu devotees who come here in thousands every year to pay their respects to the goddess.

It is believed that Goddess Amman will cure your illness if you visit her with sheer dedication and devotion. As per a local legend, it also said that Lord Rama once visited this temple before embarking on a journey to kill the demon Thadagai. On account of the presence of lush greenery, Masani Amman Temple also attracts a lot of nature lovers and photographers.

Settled in the midst of Anaimalai Hills and surrounded by beautiful green vegetation, the region of Masani Amman Temple can certainly let you feel the beauty of raw nature. The presence of a cool breeze throughout the day adds on to the existing grandeur of the place.

Dedicated to Lord Hanuman, Ashtamsa Varadha Anjaneyar Temple is a recently built temple in Coimbatore and is visited by hundreds of devotees every month, especially on Tuesday, as this day is considered to be the day of Lord Hanuman. It is a popular belief that anyone visiting this temple and providing Lord Hanuman with offerings can certainly lead a happy and prosperous life, as they will be under the care of Lord Hanuman itself forever.