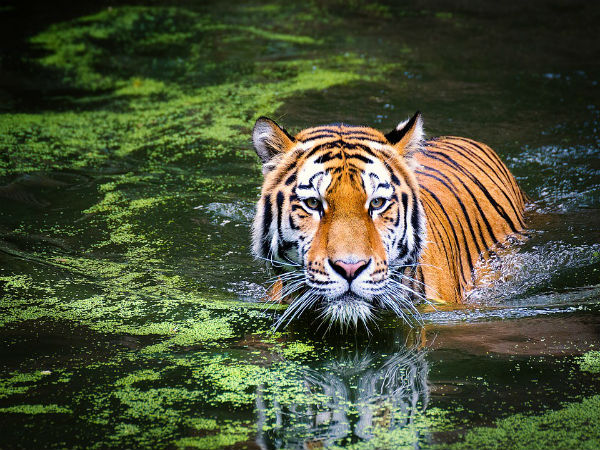 It is a proud owner of 2/3rd of the world's population of the great one-horned Rhinoceros.Kaziranga National Parkis aUNESCO World Heritage Site in India. The park is counted as one of theten wildlife sanctuaries to visit in India during winterdue to its natural scenery. The Sanctuary was founded way back in the year 1905 and became a part of the Tiger Reserve in the year 2006. If you are planning a trip to northeast India, don't forget to add this park to your itinerary.

A UNESCO World Heritage site,Sundarbans National Park, is a swamp forest with various water-bodies. The park is famous for being home to a considerable number of Royal Bengal tigers and spotted deer. The tigers here are known to be man-eating tigers, but their allure pulls animal lovers from far- off lands. The national park is also rich in its flora, avifaunal, reptiles, and marine life treasures.

Gir National Parkis the only place where the endangered Asiatic lions and Ass are spotted. Close to popular destinations like Somnath and Junagadh, the park was the former hunting grounds of the Nawabs of Junagadh. Counted as one of the topwildlife destinations to visit in India in winter, the park owns a rich animal treasure. Three hundred avifauna species, 38 species of mammals, 37 kinds of reptiles, and more than 2000 insect species dwell here.

Ideal for spotting the Royal Bengal Tigers,Kanha National Parkis the state's largest national park and also the best administered one in Asia. Due to housing a vast population of the 'Big Cats,' the park is a part of Project Tiger. The park has more than 1000 kinds of flowering plants. Thus, it one of the best places to visit in India for nature lovers.

Home to the elusive leopards in good numbers,Pench National Parkalso houses more than 285 residents and migratory birds. The avifauna species in the park also includes four endangered species of vultures. The national park is so fascinating that it has served as an inspiration behind the famous Jungle Book by Rudyard Kipling.