Vishramgadh, Nashik - A Trek To The Lost World 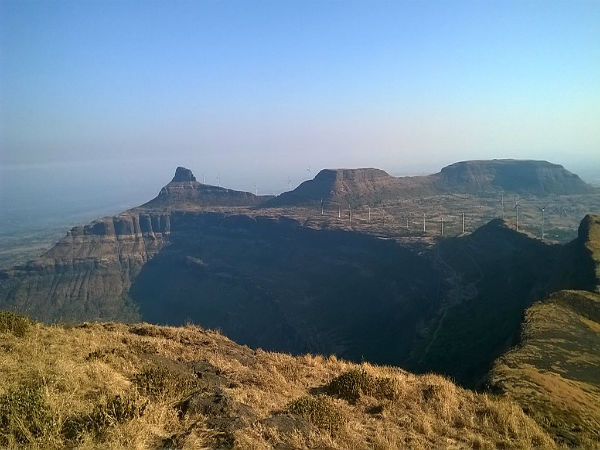 Nashik is famously known as the 'wine capital of India'. Laden with beautiful natural forests, waterfalls and rivers, it is a wonderful weekend destination away from the hectic city life. The hidden wonders of Nashik are yet to be explored and we will discover one such beautiful location which shares its glorious history with the rest of India since medieval times. Beautiful trips to the city of Nashik will open doors to local folklore and glimpses of history telling the tales of valiant heroes frozen in time.

Patta Fort or Vishramgadh is located between Ahmednagar and Nashik. Located at a height of 1392 m, the Patta Fort is the place where once Shivaji came for rest. The history of the fort dates back to the 14th century when the Bahamani kings built it. After the fall of the Bahamani Empire, the fort was captured by the Nizam of Ahmednagar. It was later taken over by the Mughals and finally by the Peshwas.

More than the ruins of history, the fort represents the stay of the most valiant ruler of history and local folklore still sing the ballads of victory of Shivaji Maharaj.

Nashik experiences scorching summers with less or no rains. It is, therefore, advisable to visit the fort during winters from September to late January when the climate is cool and the lusting green hills rejuvenate the trekkers for an enchanting climb. Rainy season encounters heavy rains on the hills and it is advised to carry an extra pair of clothes and rain sheets in case you don't want to get wet.

By air: The best way to travel Vishramgadh is via airways. The nearest airport is Mumbai which is 175 km from Nashik. From Nashik, you can easily avail state transport or a private cab for Vishramgadh and the journey takes about 4 hours.

By rail: The nearest rail head is Nashik and it connects to major routes and cities of the country. From here you can hire a cab for the 45 km journey to Patta fort.

By road: Vishramgadh has extensive state highway road network which links to nearby cities of Nashik and Mumbai.

Trekking the Patta fort is an easy task and even amateur trekkers can accomplish it. The forest department and local villagers have done a splendid job in developing pathways alongside the fort with steps and gazebos. The Rajwada site near the fort has fallen into ruins and disarray over the years and is now represented by old brick and mortar.

The Trymbak Darwaja guards the entrance of the fort and has been preserved in good condition. Entry inside the gates reveals the monumental architecture which has endless stories to covey. It is a perfect site for photographic shoots.

Vishramgadh also houses the shrine of Shri Laxmangiri Maharaj inside the caves of Pattawadi village. On a full Purnima night, the disciples of Laxmangiri Maharaj gather for prayers at this site. After spending a few moments near the cave, a straight headway leads to a small waterfall and from here the trek takes us to the fort directly. Atop the fort, one can easily have a view of the entire Nashik city which tells the tale of it being used a watch tower in the earlier times.

The Ambarkhana is a newly constructed hall for visitors to stay at night. It can accommodate 200 visitors at a time. The caves are a site of serious meditation by the Sadhus. Visitors generally warn not to speak a word while inside the cave as it may disrupt their meditation which generally carries for a month.

Trekking down the fort via the Igatpuri road, you will reach the Mhaiswalan Ghat. It is interesting to see the valleys of mountains converge from both sides giving a picturesque view. From Kalsubi till Sinnar, all the way down the mountain, windmills accompany the visitors and they seem to sail in the high winds among the clouds.

On climbing down the Mhaiswalan Ghat, the village Takked is encountered. It houses the temple of Jatayu and is the site where Lord Ram met Jatayu breathing his last.

Comments
Read more about: nashik
Other articles published on Jun 4, 2019