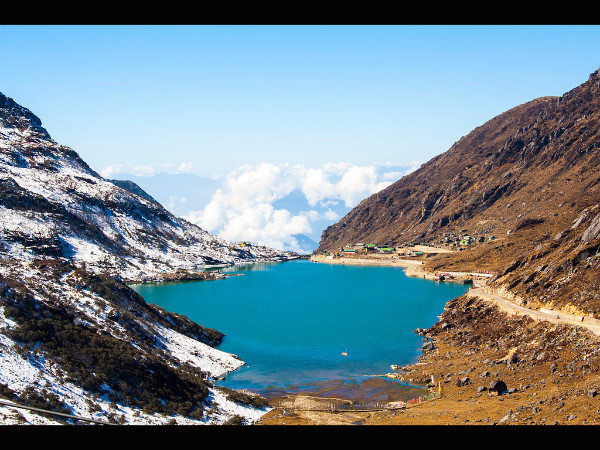 The enticing beauty of high-altitude lakes is very interesting to explore. They are a visual delight for every visitor. Misty surroundings, imposing mountains and chilly climates add to the excitement of tourists. Here is one such picturesque high-altitude lake which will bind you its ardent beauty. We are talking about Tsomgo Lake near Gangtok.

Tsomgo Lake is one of the interesting attractions in Sikkim tourism. The idyllic surroundings of this waterbody attracts everyone. In winter, it remains frozen and in summer it is enclosed by the blossom of flowers.

The surface of the lake reflects different colours in different seasons. Therefore, the lake is considered sacred among Sikkimese people.

Tsomgo Lake also serves as the venue for the Guru Poornima festival. People also believe that the water of the lake consists of medicinal qualities.

The Alpine forests around this oval-shaped lake is a home to numerous species of birds.

Tourists can enjoy a Yak ride around the lake. Surely, it is one-of-its-kind experience.

These are some of the interesting facts about Tsomgo Lake.

Usually Tsomgo Lake is covered during the trip to Nathula Pass. Changu Lake is located on Gangtok-Nathula Highway, around 40km from Gangtok.

You can also visit Nathula Pass first and then visit Tsomgo Lake on the way back. Nathula Pass is a mountain pass at the border of Sikkim and China's Tibet Autonomous Region.

The journey from Gangtok to Nathula Pass is also an enchanting one. You can explore Rukmini Falls and a few other high-altitude lakes on the way to Nathula Pass.

Nathula Pass is truly a visual delight; snow-capped peaks, misty landscapes and the surrounding alpine forests will amaze you to the core.

Baba Harbhajan Singh Memorial Temple is one of the main attractions at Nathula Pass. Baba Harbhajan Singh was a soldier who was killed during his duty at the border. Later, he is said to have appeared in his friend's dream and requested him to build a shrine. So this shrine is built in the memory of this soldier. It also has Shiva Temple with a big Shiva Statue in the temple premises.

Tourists can also cover the Elephant Lake near to Baba Harbhajan Singh Memorial Temple. No doubt, you will enjoy the picturesque views of Sikkim.

How To Reach Tsomgo Lake and Nathula Pass

Tsomgo Lake is situated on Gantok-Nathula Highway. It is better to hire a private cab from Gangtok to explore these places. Since there are the mountainous regions, the roads are narrow and bumpy. You should also be prepared for sudden change in climate as it is the Himalayan region.

Tsomgo is one of the famous lakes in Sikkim and it is known for its unique colour-changing phenomenon. Hence, a trip here is a must.

Comments
Read more about: lake unique travel ideas gangtok sikkim
Other articles published on Nov 22, 2016
We use cookies to ensure that we give you the best experience on our website. This includes cookies from third party social media websites and ad networks. Such third party cookies may track your use on Nativeplanet sites for better rendering. Our partners use cookies to ensure we show you advertising that is relevant to you. If you continue without changing your settings, we'll assume that you are happy to receive all cookies on Nativeplanet website. However, you can change your cookie settings at any time. Learn more
Change Settings Continue