Sikkim – A Hive Of Blessed Mounts And Bountiful Spots 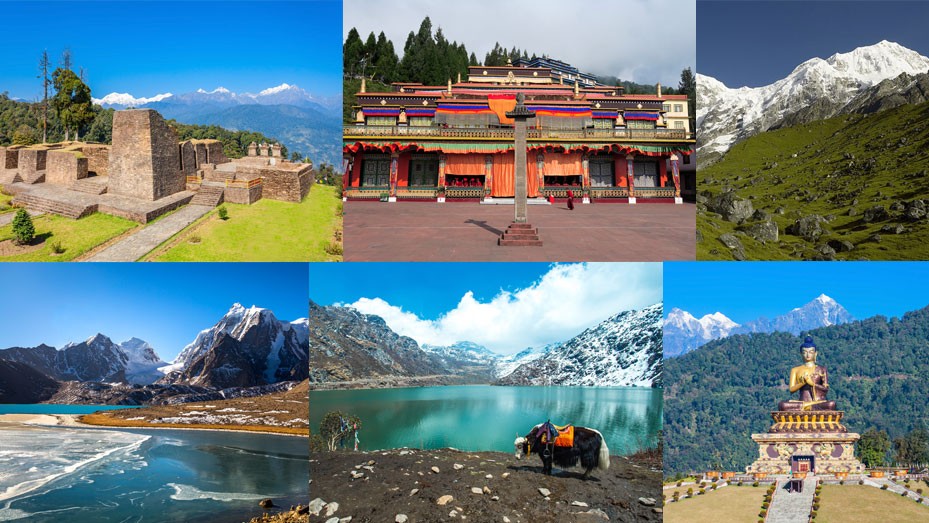 Travelling is always considered rejuvenating. Visiting a destination, be it explored or unexplored, will always have something wonderful to offer to all the travel aficionados out there.

But when it comes to paying a visit to a place almost renamed a paradise by the locals for being extremely alluring with the best of scenic spots, snow-crowned mounts, flower-bedded meadows, pristine waterbodies and much more, the very word travel begins to sound extra fascinating.

But which place could be so very alluring that just a few words can make it seem so wonderful? We are talking of the simply superb Sikkim!

Sikkim, one of the most beautiful Indian states located in the region of the Himalayan mountains, is a magical land teeming with nature's blessings. With lovely places worth a visit once in a lifetime, this wonderful state has many things unique in it to boast about.

Come, let us learn all the important and interesting facts about this unexplored hilly Indian state . . .

Sikkim is a hilly region nestled in the Himalayan mountains. Most places in the state of Sikkim are hilly terrains, with an elevation ranging from 280 m to 8,585 m in height. The highest point of the state happens to be Mount Kanchenjunga – the third highest peak on globe. Sikkim shares its border with Bhutan in the east, Nepal in the west and the Tibetan plateau in the north.

The state has about 28 mountainous peaks, about 227 high-altitude lakes and around 80 glaciers. What's more, adding to the uniqueness of the state's geography are as many as a 100 rivers and rivulets and many major hot springs. The Hot Springs of Sikkim are considered very special for they are believed to have therapeutic powers with a natural average temperature of 50 °C.

Talking more about its geography helps us understand that as much as one-third of Sikkim is heavily forested and there are a range of streams that are snow-fed and join River Teesta – the lifeline of Sikkim.

As beautiful as the state of Sikkim is, so beautiful is its climate. Though Sikkim happens to be one of those very few Indian states receiving snowfall on a regular basis each year, the residents at the place always experience a moderate and pleasant climate.

The climate here changes from the tundra in the northern area to subtropical climate in the southern region. The northern region that experiences the tundra climate is snow clad for about four months each year when the temperature drops to as low as 0 °C.

What makes the place's climactic conditions pleasant is the fact that its temperature almost never exceeds 28 °C during summer nor does it freeze at 0 °C during the winter season. The monsoon season is a little unsafe though for the place receives quite heavy rains that lead to landslides.

Different Names Of Sikkim, Its Subdivisions And Populace . . .

The state of Sikkim has many names. While according to the Lepchas its called "Nye-mae-el", which means "paradise", people of the Limbu community called it "Su Khim", which means "new house". And for the Bhutia community people Sikkim is "beymul Demazong", which means "the hidden valley of rice".

The state is divided into four divisions as East, West, North and South Sikkim and their capitals are Gangtok, Gayzing, Mangan and Namchi respectively. The entire state is populated with about 607,000 people and happens to be the second smallest Indian state after Goa, apart from being the least populated Indian state.

Visit these places and indulge in the activities mentioned below while at the lovely land of Sikkim: The tallest ever statue of Sikkim's patron saint – Guru Padmasambhava in Namchi, the lovely Rhododendron sanctuary – the sanctum with a wide variety of the state flower, Mount Kanchenjunga – world's third highest peak, many sacred and vibrant Buddhist monasteries, the beautiful green valleys and rivers, the Sikkim special hot springs, tranquil and unexplored places suitable for village and ecotourism, a range of hills perfectly suited for adventure sports and the list goes on . . .

And not to forget, the Sikkimese cuisine and culture are two things that have also put this little beautiful state in an important position. Sikkimese people are basically rice eaters. Some of the popular traditional foods of Sikkim are momos, chowmein, wanton, fakthu, gya thuk or thukpa – a noodle based soup, phagshapa and ningro with churpi. Alcohol-based drinks, too, are popularly consumed amongst the Sikkimese.

With so much in the offing, it is no wonder this resplendent state called Sikkim has and is slowly turning out to be a major Indian tourist hot spot.