Nativeplanet
»
Travel guide
»Trekking At Dandeli – An Expedition Of A Lifetime!

Trekking At Dandeli – An Expedition Of A Lifetime! 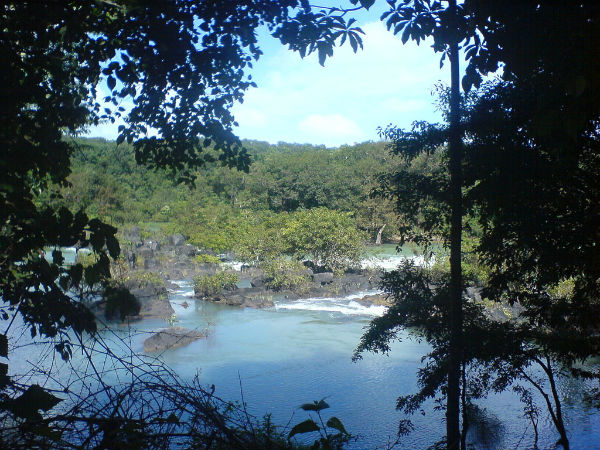 Dandeli, a town located about 100 km from Goa, is a haven for every adventure-buff. Nestled on the banks of river Kali, the town is blessed with a magnificent landscape of rocky hills, streams of water, lush thickets of forest and rich biodiversity for a variety wildlife.

According to a local tale, the name Dandeli comes from Dandelappa, a loyal servant of the persisting landlords. Apparently, he lost his life due to his severe loyalty, and so the town was named after him. Another tale goes by the belief that King Dandakanayaka passed through the forests of Dandeli, and named it after himself.

Dandeli is home to a wildlife sanctuary, where many animals such as tigers, leopards, antelopes can be spotted. It happens to be the second largest wildlife sanctuary in Karnataka, and the only place in Asia where Black Panther can be found.

Various adventure activities such as mountain biking, white-water rafting, kayaking, trekking and camping can be done at Dandeli. The town is primarily famous for these adventure activites, therefore, it is filled with services that help out tourists with all the necessary equipment.

Best Time To Trek At Dandeli

For trekking, the best time to visit Dandeli would be between the months of October to March, when the weather is pleasantly cool. If you wish to bird-watch while trekking then January and February is the right time.

Things To Carry For The Trek

Routes For The Trek

Trekking in Dandeli is best when booked with a local camp, since they have the experience of taking tourists and trekkers around the place. The price of these treks depends on the route that you plan on taking. Apart from the trekking fee, a nominal price might be applicable to enter the forest. Here are some popular trails for trekking in Dandeli.

A relatively easier one this trek to Kavala Caves is organized by the Forest Department every day at 6 am. A trek of about 3-4 km downhill will take you to the entrance of the caves. These caves have about 370 steps, which will lead to the insides of the caves, which houses a 4 ft shivalinga. You will need to use the torchlight to walk through these caves since it is dark and dingy.
The way out of the caves is from the other end, and is a pleasant trek since you get to see the river Kali flowing parallelly.

This trek is a much harder one and requires some level of expertise in trekking. The distance is roughly 16 km which will take an entire day to complete. A stream from the Sathkanda Falls which is located about 7 km from Kulgi town, follows throughout the route. The trek can also be set till Nagazari Falls, which will take about 3-4 hours to complete. The entire trek is usually till the Sykes Point, a popular spot that offers a picturesque panoramic view of the valley. You might spot beautiful hornbills flying through this scenic view.

The first few kilometres will have clear paths after which the route might have up to knee-deep water from the stream, depending on the season you plan on visiting. A fact to know about this route is that it is filled with rocks, stones and most of the trail lies on the stream itself. Therefore, it is important to go here during the post-monsoon months and wear at least ankle length boots to avoid soggy feet and leech bites. Carry some lemon and salt, to get rid of the leeches, in case they bite.

It is advised to plan this trek with the help of a local guide. These guides are usually well-trained from the Karnataka Tourism Department, and will stop at places rich with flora and fauna while educating you about it. They are well-versed with the nooks and corners of the forest, so you would not have to worry about getting lost.

The route lies in the heart of the Western Ghats, amidst nature in its purest form, so the experience of being there is simply undescribable! The tiresome trek is, therefore, completely worth the tricky and hard terrain. A lot of small streams that are found on the way can be crossed. But sometimes, you'll have to walk through the water stream. You can stop for a break on the way to witness a variety of birds found in abundance during this trek. A haven for birdwatchers, trekkers are bound to see at least a few of the different species of birds such as Orange Minivet, Asian Fairy Bluebird, Black-naped Monarch, Flame-throated Bulbul, etc.

Once you complete the trek and reach Sykes Point, you'll be welcomed with an unforgettable view of the entire valley filled with rich greenery, birds, streams, the river Kali and the sun setting in the backdrop; a breathtaking view that is nothing short of an image from a fairytale! Here, you can pitch a tent and camp for the night.

The Potoli-Shiroli trek starts 11 km from Dandeli. This beautiful trek is longer than the one to Kavala Caves, with a distance of about 13 km to cover. The entire trek might take around 5-6 hours to be completed. Little harder than the first trail and easier than the second, this route makes for a perfect laid back trail with not much hard terrain to walk through. It is advised to pack some lunch so that you can take a break, relax and have it midway through the trek.

Even in this trail, you get to see birds of over 400 species, so bring your binoculars to this trek without fail! Make sure to hire a guide through this trail as well, since it contains a lot of natural resources and beauty that will go unnoticed if it has not been pointed out. Once you reach the end of the trek at Shiroli, camp there for the night. Early on the following morning, you can spend some time bird watching before returning to Potoli.