Top 5 Temples That Are Must-visits In Jaisalmer 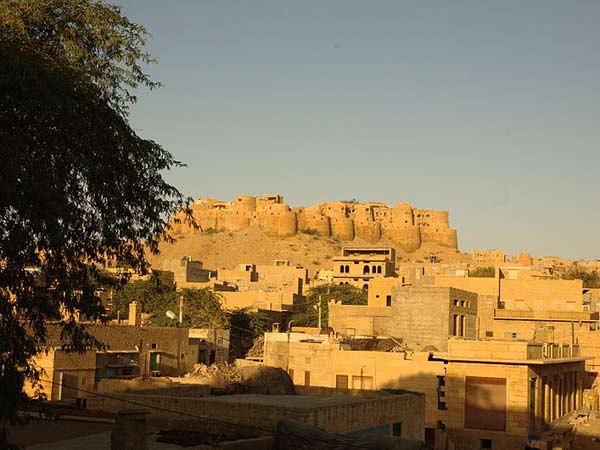 Located at a distance of about 78 km from Jaisalmer, Tanot Mata Temple is quite a popular place in Rajasthan. It is said that a chapter of the Indo-Pak war that took place in 1965 occurred near this temple.

3000 Pakistani tank missiles destroyed everything in that area but mysteriously the temple was not hit by any bullet or bomb that was aimed at it. Border, the 1997 Bollywood film, represented the scene in the movie. Tanot Mata Temple has a gallery that exhibits a collection of unexploded bombs from that age.

Situated inside the Jaisalmer Fort, the Laxminath Temple is dedicated to Lord Vishnu and Goddess Laxmi. It attracts a huge number of devotees and tourists because of its location as Jaisalmer Fort is visited by a large number of tourists throughout the year. It is said that the Laxminath Temple was constructed by Rao Lunkaran in 1494. The structure of the temple is quite astonishing and if you are planning to visit Jaisalmer, then this temple is a must-visit.

This temple is dedicated to the 23rd Jain Tirthankara. According to history, Muhammad Ghori destroyed this 900-year-old temple in 1152 AD. However, the local people reconstructed the temple after 800 years with the help of government officials. Located in a small city called Lodhruva, the Jain temple is surrounded by sand dunes and offers a picturesque view to the tourists.

Located at Ramdevra, the temple is dedicated to a Rajput saint named Ramdev, who has a huge number of followers in Rajasthan. Ramdev had done a lot of work for the upliftment of the lower and abused classes in Rajasthan.

The temple is regarded as a sacred temple as it marks the eternal resting place of saint Ramdev. During the months of August and September, a large number of people come here for the Ramdevra Fair.

Comments
Read more about: temples travel india tourism rajasthan
Other articles published on May 8, 2018
We use cookies to ensure that we give you the best experience on our website. This includes cookies from third party social media websites and ad networks. Such third party cookies may track your use on Nativeplanet sites for better rendering. Our partners use cookies to ensure we show you advertising that is relevant to you. If you continue without changing your settings, we'll assume that you are happy to receive all cookies on Nativeplanet website. However, you can change your cookie settings at any time. Learn more
Change Settings Continue