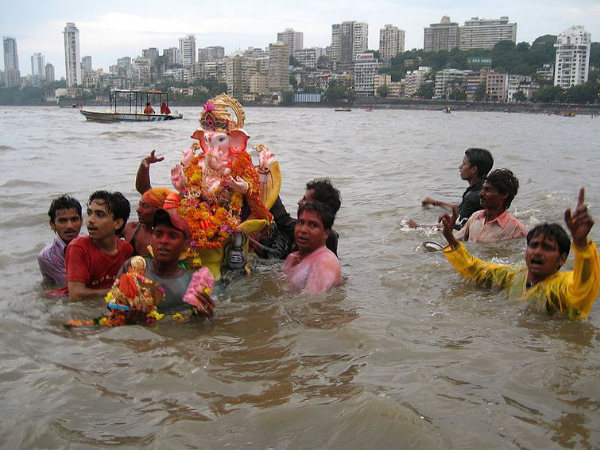 Ganesh Chaturthi is one of the most significant religious festivals for Hindus. The festival, also known as Vinayaka Chaturthi, is celebrated as an offering to Lord Ganesha, who is believed to save one from all kinds of obstacles in life.

A sight from Girgaon Chaupati

Devotees get Ganesha idols made of clay and worship them at public pandals or at their homes. The 10-day worship ends by immersing the idols at a lake or pond on the day of Anant Chaturdashi. This process is known as Ganesh Visarjan.

The states of Maharashtra and Telangana are known for their Ganesh Chaturthi celebrations. In Maharashtra, there are some venues that are popular for the Ganesha idol immersion, or Ganesh Visarjan.

Let's take a look at the top 3 places in Mumbai for Ganesh Visarjan.

Girgaum Chowpatty is a popular beach in south Mumbai, close to Marine Drive. Being a major destination for Ganesh Visarjan, devotees flock to the place from Mumbai and Pune to immerse Ganesha idols in the Arabian Sea.

The processions here start early morning towards the beach. The streets are filled with devotees holding the idols for their turn to immerse them. You can witness dance, bursting of crackers and music as a part of the processions.

Powai lake in the suburbs of Mumbai is another famous location where Ganesh Visarjan is held. The place witnesses a lesser crowd compared to Girgaon Chaupati, but the festivities held here are no less compared to any place in the city. Devotees even make idols out of clay from the lake making it eco-friendly.

Devotees about to immerse the idol at Juhu Beach

Juhu Beach in Mumbai is also popular for Ganesh Chaturthi celebrations held here. Large colourful Ganeaha idols are brought to the beach by devotees, followed by a crowd to witness the whole procession. The sight is generally crowded and the music and other festivities give the place a vibrant aura.

Comments
Read more about: mumbai temples religious travel maharashtra ganesh festival anant chaturdashi ganesh chaturthi
Other articles published on Sep 1, 2016
We use cookies to ensure that we give you the best experience on our website. This includes cookies from third party social media websites and ad networks. Such third party cookies may track your use on Nativeplanet sites for better rendering. Our partners use cookies to ensure we show you advertising that is relevant to you. If you continue without changing your settings, we'll assume that you are happy to receive all cookies on Nativeplanet website. However, you can change your cookie settings at any time. Learn more
Change Settings Continue