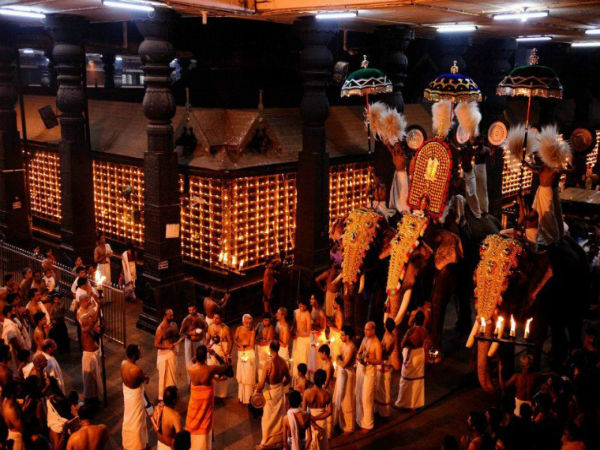 Guruvayur is a temple town in Kerala's Thrissur district which is well known for the renowned shrine dedicated to Lord Sree Krishna. The temple is considered as one of the holiest shrines amongst the followers of Hinduism and is a shrine which remains close to the heart for many. The shrine is often known as Bhooloka Vaikuntam which in translation means the Holy Abode of Lord Vishnu on Earth.

The main deity here is Maha Vishnu, who is worshipped in the form of Krishna. The idol here depicts him in a standing posture, with four arms each carrying a conch, discus, mace and lotus. As per legends, the idol placed here was worshipped by Lord Krishna himself in his palace at Dwaraka and was installed here after Dwaraka went under the sea.

The Pantheon Of Legends And Devotees

It is said that the idol was installed together by Guru, who was the teacher of the Gods, and Vayu, the Wind God; hence, the place came to be known as Guruvayur. While both Guru and Vayu were on the look out for a site for the installation of the idol, they were informed about this place where Lord Shiva worshipped Vishnu and decided to install the idol at this beautiful and holy place.

The temple is said to be 5000 odd years old as per certain records found here. Lord Krishna here is known as Guruvayurappan which in translation from Malayalam means the Lord Of Guruvayur. The temple has a pantheon of legends and devotees associated with it. A few amongst them are Vilwamangalam Swamiyar, Poonthanam, Kururamma, Melpathur Narayana Bhattathiri and not to forget the renowned elephant Guruvayur Keshavan.

The Invaders And The Temple Fire

The first invasion of the temple was made by the Dutch in the year 1716 AD, who looted various treasures and gold from the shrine and set fire to the Western Gopuram or Temple Tower, which was later rebuilt in the year 1747 AD.

In 1789 AD, Tipu Sultan attacked the shrine. In order to protect the deity, the idol was kept hidden underground and the Utsava Murthy was shifted to the Ambalapuzha Sri Krishna Temple. But Tipu set fire to the temple which was saved by the timely rain. Later in the year 1792, the idols were reinstalled; however, the daily rituals were affected seriously.

On November 30th 1970, a massive fire broke out at the shrine which raged for about five hours and almost reduced the temple to ashes. Interestingly, the main shrine and the sub shrines along with the flagstaff remained untouched. The fire destroyed almost everything although with exemptions, the main shrine was just about 3 yards away from where the fire had began but the fire did not even engulf the dry garlands which were hung on the main shrine.

Njanappana and Narayaneeyam are two scriptures which hold a very important place in the temple and amongst the devotees. Njanappana is a philosophical poem which is written in simple Malayalam by Poonthanam which makes it understandable even to a common man.

The poet was an ardent devotee of Guruvayurappa who was engulfed in the sorrow which was caused by the untimely death of this infant child. Poonthanam writes about the meaning of life, how Unnikrishnan or Baby Krishna plays in one's mind and if one need a child of his own.

Narayaneeyam is a condensed version of the Bhagavata Purana by Melpathur Narayana Bhattathiri, which is written in 100 chapters and has 1034 verses. According to legends, Bhattathiri composed this hymn as a cure for his paralysis and the Lord was pleased by his devotion and cured him.

Dress Code To Be Followed

The temple follows a very strict dress code. Men are to wear a mundu or the traditional dhoti around their waist and are not permitted to wear shirts or vests covering their chests. Women are allowed to wear sarees and salwar kameez.

The major festivals celebrated here are Onam, Vishu, Ekadashi, Janmashtami, the annual temple festival, etc. and they are celebrated with great pomp and grandeur.

Guruvayur has a railway station of its own which connects major towns and cities across the state of Kerala and to a few places outside the state as well. The nearest airport is the Nedumbassery Airport or the Cochin International Airport which is located at a distance of 85 km from the temple town. The town has good connectivity by road transport with plenty of state owned and private owned buses operating from different parts of the state.