Nativeplanet
»
Travel guide
»6 Coolest Things to Do in Hampi

6 Coolest Things to Do in Hampi 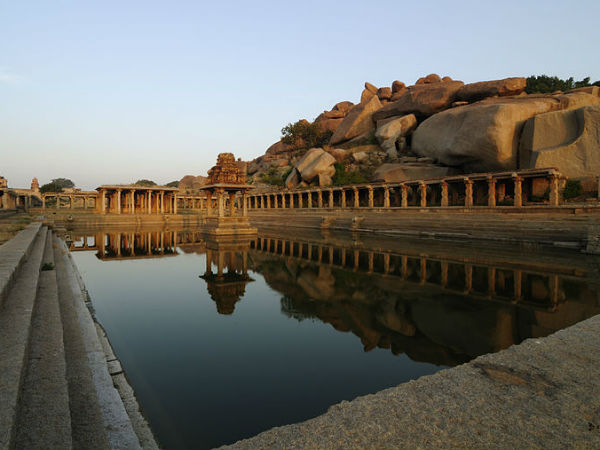 Hampi is probably the most unexplored and untouched place in South India. While many head to Kerala and Goa for their expeditions, Hampi offers an eclectic mix of everything. The local vibe, the meditating saints, architectural marvels, the beautiful boulders and a quaint market are some of the unforgettable offerings of Hampi.

Hampi is unique because it has something for every kind of traveller. From adventure to slow-paced relaxing activities, Hampi has covered your travel scenes. So this time, we have decided to make a list of 6 coolest things you can do in Hampi. Check them out below.

There is something serene and tranquil about the villages around Hampi that you don't get to see anywhere else in the world. Hampi is quite a small town which can be covered on foot in two days. But if you are bent on exploring every nook and corner Hampi, then we recommend you rent a bicycle which is hardly Rs 100-200 a day.

The bicycle can help you explore Hampi at your own pace. You can even ride outside Hampi and witness the beautiful villages and people who will wave at you as you pass by them. Moreover, the main temples and market can be easily covered in a day unless you plan to climb the boulders.

As tourists from Israel came to this part of the country, Hampi gained its popularity. It is still less popular than the beaches of Goa or boats of Kerala but it has its own place. With the arrival of tourists, Hampi has opened many cafés, with cuisines ranging from Italian to Continental, to Lebanese. Some cafés are popular amongst Indians but the rooftop cafés have more European tourists.

There are only two rooftop cafés and both serve the most delicious hummus pita and fruit salad. The cafés have their own slow-paced vacation vibe. If you're looking to make friends, head to one of these rooftop cafés.

Needless to say, the centre of attraction of this town is still its century-old temples. During the time of Vijayanagara dynasty, the architecture was considered more of an art rather than just buildings and a few elements of which have come out strongly in these temples. The beautifully carved stones, the deities made out of stone and the stone floors of temples make you wonder how the life during the Vijayanagara era would have been.

It is surprising to see how well kept these temples are! Even though the kingdom is gone, the reminiscence of it is still there. There is one temple right in the middle of the city. But if you're up for an adventure, go across the avenue near police station and you can discover the marvels of Vijayanagar dynasty. It is advised that you keep three days to explore these temples. Just when you think you have covered exploring all the temples, you will find something untouched again.

4. Climb Up The Boulders

Climbing boulders is one of the most adventurous and exciting things to do in Hampi. There are a few professionals who charge an expensive fee and provide worn-out harness and ropes, don't fall for them. It is better that you do the climbing on your own. There is so much to explore in Hampi when it comes to climbing.

Go to the other side of the river or just stay in the city area, you will have enough boulders to climb that will lead you to beautiful sceneries. Make sure you carry enough water with you because as sun the goes up, your power goes down. So you'll need enough hydration while climbing.

This is one of the most popular and touristy things to do in Hampi. You may have ridden boats and gone on cruises but you have not ridden in a coracle boat. It is a circular boat made out of plant. The boat can hold up to 5 people at once. There is no machinery involved. It is pushed and pulled with the help of a huge stick. Yes, go back to basics.

You'll be charged around Rs 70-80 for this but in the evening, they spike up the rates for no good reason. Nonetheless, the experience of riding this boat is worth any amount of money. It feels like you're at the level of the water. It almost feels like you're going to fall but the structure of the boat is so strong that you can trust the generations making it.

6. Meditate Near The Crocodile River

After climbing, riding and exploring, you will need a moment of peace and tranquillity. We recommend you going to the Crocodile River and relax and meditate with the sages. It's called Crocodile River because people believe that there are many crocodiles living there.

There are, but no one has actually witnessed one. They live far from the shore, away from the troublesome humans. The riverside also makes a good background for beautiful selfies. You can reach there by 4.00 pm and stay there till sunset, it is one of the most beautiful things you will ever witness.

You can visit Hampi either during the monsoon season, from mid-July to September, or during the winter season, from October to March. The rest of the year witnesses a blazingly hot weather.

13 km from the city centre of Hampi is Hospet, which has the nearest railway station. If you're landing by flight, the nearest well-connected airport is at Hubli, which is 144 km away. If you prefer the cradles of the road, you can take a bus from the major cities of India or drive to Hampi.