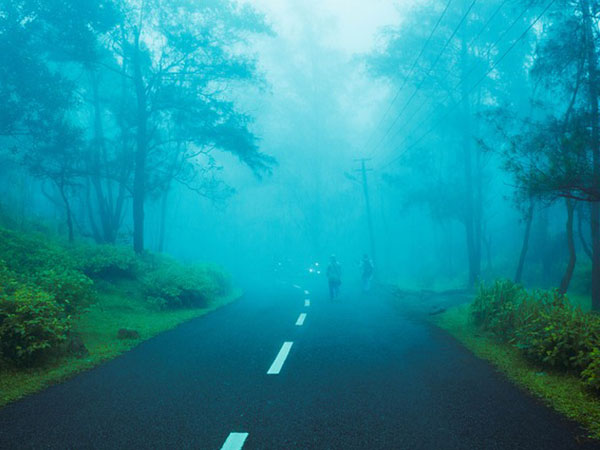 If you want to undergo Sholay nostalgia, Ramadevarabetta in Ramanagara is the place you need to go! Who doesn't dream of an exquisite bike trip on a Sunday morning through rustic villages and splendid granite hills!? Ramnagara, or Ramgad as picturised in Sholay, is a paradise for trekking and photography and is one of the best weekend getaways from Bangalore.

Savandurga is a hill located 60 km west of Bangalore off the Magadi road. It is considered to be one of the largest monolith hills in Asia and the stunning sunrise at the summit is a sight to behold and cherish!

Hit the NH4 to reach this stunner of a destination by a road trip from Bangalore. Located near the Kolar goldfields, Anthargange night trek is very popular among the trekking enthusiasts!

Located 70 km away from the city of Bangalore, this ancient hill fortress is a very popular tourist attraction near Bangalore. Best known for its scenic beauty and pleasant weather, it offers a set of attractions such as Tipu's Drop, Horse Way, Secret Escape Route, and a couple of famous temples - the Bhoga Nandeeshwara Temple and Sri Bhoga Narasimha Temple.

Drive on the Kanakpura road to reach this natural footprint where the River Arkavathy merges with River Cauvery. Here the Cauvery river flows into the deep narrow gorge over which even a goat can leap and thus the name Mekedaatu. Coracle rides here is a bliss!

The hilly retreat of Avalabetta is a paradise for nature lovers! Located 30 km away from Nandi hills, this serene spot vouches for a perfect laid back weekend.

Hardly a two and half hour ride from Bangalore would take you to one of the closest river rafting places from Bangalore! Spellbinding landscapes and exotic wildlife make Bheemeshwari a utopia for nature lovers.

Ranganathittu is one of the most preferred stopover for migratory birds in Asia! A deviation from the historical town of Srirangapatna along the Coorg state way would take you to this group of six islets on the banks of river Kaveri which is a flourishing breeding and nesting ground for several migratory birds!

A bike trip from Bangalore to Mysore unravels many appeals. From the mighty Mysore palace to India's most beautiful show garden - Brindavan, Mysore has everything in its vicinity to impress a travel enthusiast!

Lepakshi is a wonder in itself! Located in Anantapur district of Andhra Pradesh, this historic and archaeological destination fulfills a desire to go back in time. The statue of Nandi in Lepakshi is quite famous for its mightiness and splendour!

The mystique falls of Hogenakkal is situated in Dharmapuri district of Tamil Nadu. Often referred to as the 'Niagara Falls of India', it is a perfect destination for nature lovers. Coracle rides around these falls would definitely be once in a lifetime experience!

If wilderness and adventure are what is on your radar, BR Hills is the place you need to be! Being at the confluence of the Eastern and Western Ghats, the region is endowed with a rich and varied ecosystem. It also has a tiger reserve!

Chikmagalur is a town located in Chikkamagaluru district of Karnataka. Home to the highest peak in Karnataka, Mullayangiri, Chikmagalur is one of the most charming destinations that you can ever visit.

Horsley hills is a solitary hill station in the state of Andhra Pradesh, which is fondly called as the 'Andhra Ooty'. It is a perfect spot for nature lovers to break free!

Sakleshpur is a picturesque hill station in Hassan district of Karnataka. Located on the Bangalore - Mangalore highway, scenic beauty, lush green coffee plantations, enchanting mountains, silvery streams, and pleasant, chilling and romantic weather makes it one of the idyllic destination for road trips from Bangalore.

If we sought out the best offbeat tourist attractions in Kerala, the serene and pristine landscape of Wayanad would definitely be on top of the list, thanks to its pristine and picturesque locales. Driving via Bandipur will give you the foremost experience of relishing the forests, waterfalls, and wildlife spotting as you unwind in the most picturesque road of South India.

Words fall short to describe the beauty of this natural gem! Fondly called the Scotland of India, Coorg offers one of the best long drives around Bangalore. The Bangalore- Coorg route which stretches from Bangalore to Madikeri via Hassan on the NH-48 is said to be one of the most favourite highways for bikers in the country and it would be an endearing and everlasting experience if you hit this road in a bike.

Often referred to as the 'Cherrapunji of the South', Agumbe is a spell binding landscape located in Shimoga district of Karnataka. Known as a great prospect to trek, Agumbe is replete with high hills, elegant waterfalls, green thickets of the Western Ghats, and some refined flora and fauna.

A pristine, grassy hill station in the lovely region of Chikmagalur, Kudremukh is calm, secluded and rich in flora and fauna. Being an avid trekking spot, the lush green grasslands and cascading waterfalls such as Hebbe and Kalahatti are must-see spots here.

Hampi is now one amongst the most sought after road trips from Bangalore. The fabled city of Hampi boasts of an opulent past and the architectural wonders and striking locales produces a surreal aura! The laid back town of Hampi is definitely one amongst the major tourist destinations in Karnataka.

Badami will surely remind you of the wild west! Famous for its rock-cut cave temples and red sandstone cliffs, Badami is very intriguing.

We hope you enjoyed the list of monsoon road trips from Bangalore. Happy Travelling :)