Ritten Earth Pillars: When Nature Is The Artist 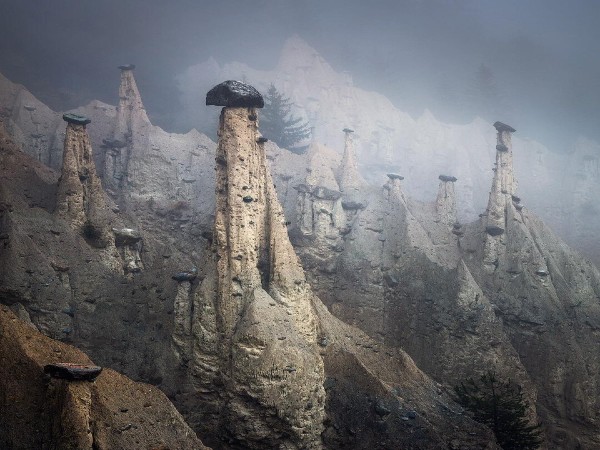 The ridged and pitted pillars taper upwards from a broad base. Some are short and stumpy, and others soar upwards and slim out into long thin necks. The tallest reach 130ft (40m) in height, and pillars of any height can support the bizarre stone 'hat'.

The stone hats, and the material that forms the earth pillars, were brought to the Ritten's slopes during the Ice Age. Rock debris of all sizes, from boulders to finely ground rocks, was caught up in glaciers that moved over the land. When the ice retreated about 10,000 years ago, this 'boulder clay' was dumped by melting ice in a thick layer on the mountain slopes.

Earth pillars such as these occur in only a few places in the world, and all attract their folklore and nicknames. Pillars in north Italy are called 'little men' in one place, and 'earth mushrooms' in another, and a group of pillars in the French Alps is known by the more elegant name of demoiselles coiffees - 'young ladies with their hats on.

There are three groups of earth pillars on the Ritten, which rises sharply from the Eisack valley. Terraced vineyards clothe the mountains; lower slopes and higher up are woods and meadows. The earth pillars all lie at about 3250ft (1000m) above sea level, clustered in wooded ravines that plunge to the Eisack.

Before World War I, South Tyrol was part of Austria-Hungary. Place names have both German and Italian forms - the Ritten is known as Renon in Italian, and the town of Bozen at its foot has the Italian name Bolzano.

On a geological time scale, earth pillars are nine-day wonders. The length of time that a pillar lasts is something of a mystery, although it is known that some will change little in decades. What is certain is that once a pillar loses its capstone, it disintegrates very rapidly. But while the weather destroys some pillars, rainfall creates new ones until there is no more boulder clay left. Not so very far into the future, the behatted earth pillars of north Italy could be a thing of the past.