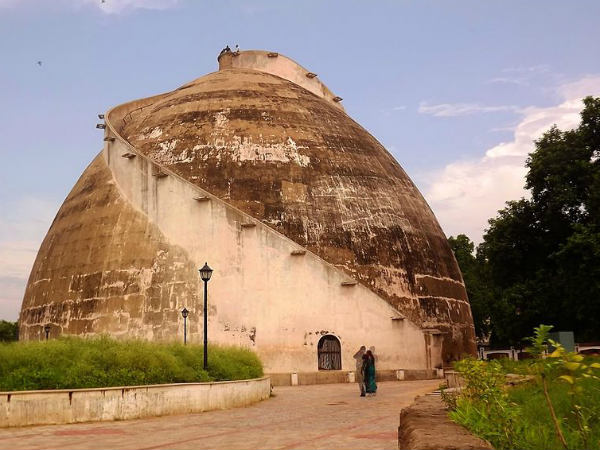 Known as Pataliputra in the past, Patna is said to be the oldest known city in the state of Bihar and one of the oldest continuously inhabited places on the planet. Therefore, it has gained immense popularity amongst tourists as a site of great historical significance. As it was once the capital of the Magadha Empire in the past, it has grown rapidly over a period of time. Today, it is one of the developing centres in India and is the capital city of Bihar. So, if you are in and around Patna and are looking forward to exploring its bygone era, then following are the major places which you must visit. These ancient sites have in a store a lot to narrate. Hence, do not miss out on any of the below-given historical attractions.

Located in the vicinity of Gandhi Maidan, Golghar is a historical monument in Patna and was built in the year 1786 as a granary to prevent famine. It is constructed in the stupa style of architecture when the region was under the control of the East India Company. Today, it is a significant tourist attraction in Bihar and it is frequented by hundreds of tourists and locals every day.

From the top of Golghar, you can enjoy the panoramic beauty of Patna and its beautiful settlements. You can also capture the incredible views of the river Ganga from its top. So, don't you think a visit to Golghar would be a memorable experience?

If there is any place in Patna which cannot be ignored by any traveller or tourist, then it is assuredly the incredible Agam Kuan. It is an archaeological site which is believed to have been built hundreds of years ago before the Common Era when the region was under the reign of the great Ashoka.

Agam Kuan is generally a deep well which was used by Ashoka to torture and punish criminals by throwing them into it. As per legends, it is also said that it is the same well where Ashoka threw his 99 half-brother's heads in order to gain the throne.

Due to atrocious incidents related to this well, it has been mentioned as the "hell on earth". Doesn't it intrigue you? If yes, then add Agam Kuan to your travel planner.

Another site of great archaeological importance, Kumhrar, also written as Kumrahar, is said to be the place where the remains of the ancient Pataliputra of the Mauryan Empire were excavated. Therefore, it is a popular tourist spot in Patna for history lovers. The ancient relics collected found here date back to 600 BCE to 600 CE. If you are an ardent lover of history, you cannot miss out on exploring the beauty of these ancient remains, especially when you are in and around Patna.

How about delving deep down the layers of time and learning in detail about the existence and survival of India? If you are in to do so, then Khuda Bakhsh Oriental Library should be your stoppage while in Patna. Opened in the year 1891, it is a national library which has a marvellous collection of ancient books and manuscripts.

From old journals to newspapers and sound recordings to databases, you can find thousands of interesting items here. It also houses several beautiful paintings which were built in the Mughal and the Rajput periods. As of now, it has an incredible collection of about 2 lakh printed books and 21,000 manuscripts.