Spend One Eventful Day in Rameshwaram 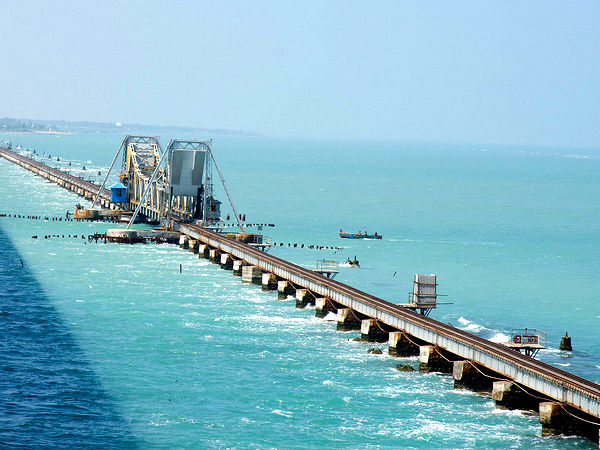 Rameshwaram is one of the popular pilgrim centres in India. Devotees flock in to visit the holy city, hoping for moksha, the eternal freedom. While on a trip to Rameshwaram, there are a few tourist attractions that are not to be missed. Here's how you can make the most of your trip if you're in the city for a 'One Day Tour'.

As the city is popular for its temples, bridges, the beauty and bliss offered; Rameshwaram is often travelled to, making it easily accessible from the nearby cities in Tamil Nadu. Located around 555 km from Chennai, it is an overnight journey by road. One can also travel from Chennai to Rameshwaram via rail. If you choose to travel by air, the Madurai Airport (174 km) is the closest to Rameshwaram, which is well connected to the Chennai Airport.

The long corridor of Ramanathaswamy Temple

The temple has the longest corridor (197 mt) among all the Hindu temples in India. Both the sides of the corridor are lined up with extensively carved pillars and is a sight to marvel. The Dravidian architectural style grabs your attention with its intricate carvings on the pillars, ceilings and the compound walls. Devotees gather here to bathe in the holy water body, also known as the Agni Theertham, to perform pujas in honour of their ancestors.

There are restaurants, stalls and other eateries close to the temple, where you can have authentic South Indian delicacies.

Dhanushkodi is one of the other reasons why Rameshwaram is a prominent tourist destination in South India. The village has mentions in Hindu mythology, and is also a serene location for surfing, scuba diving and other water sports.

A traveller who enjoys at Dhanushkodi

A trip to Rameshwaram would be incomplete without a visit to the Pamban Bridge, which is India's first sea bridge. The place has rose to fame as it is one of the favourite locations of Indian films. The 2.3 km long bridge is a connecting bridge between Rameshwaram and the rest of the country. Take a drive here to enjoy the mesmerising views of the sea on either sides!

A spectacular view of Pamban Bridge

If time permits, there are many more places to see in Rameshwaram. Some of them are Ariyamaan Beach, Kothandaramar Temple, Gandhamathana Parvatham and Jada Theertham. As Rameshwaram is located on the East Coast of India, the place experiences hot summers and mild winters. Winters are ideally the best time to visit the holy city.