Chittorgarh, Of Forts and Palaces 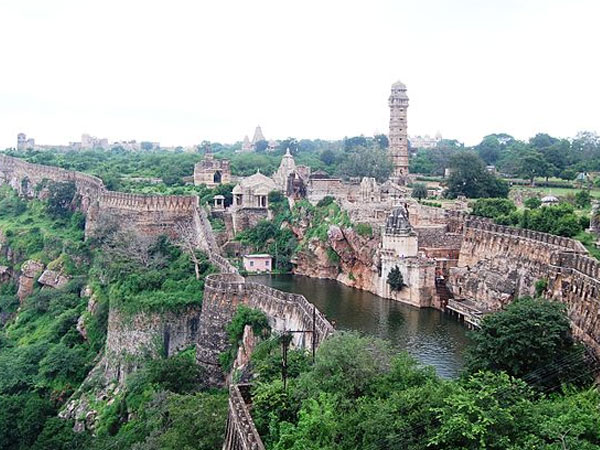 Chittorgarh, located in Rajasthan, is famous for its magnificent forts, temples, towers and palaces. It lies on the banks of Berach River, which is a tributary of the river Banas. In the olden days it served as the capital of the Sisodia Dynasty of Mewar. Today you can see many ruins of the majestic architectures of the Sisodia Kingdom.

Legend also has it that Bhima, one of the Pandavas had visited this place in search of immortality from a sage but was unsuccessful in his mission. In his anger he is said to have stamped the ground so hard that it created a water reservoir which later came to be called Bhim Lat.

There are many tourist places of attractions to visit in Chittorgarh, namely; the Chittorgarh Fort, Gaumukh Kund, Bassi Wildlife Sanctuary, Kirti Stambh, Padmini's Palace, Rana Kumbha Palace and many more.

How to Reach Chittorgarh

By Air: The Dabok Airport, Udaipur is the nearest airbase to the city of Chittorgarh. It is also known as 'Maharana Pratap Airport' and is located at a distance of 117 km. This airport is connected to Jaipur and New Delhi.

By Train: The Chittorgarh Railway Station has a well-established railway network which connects it to all the major cities such as Jaipur, Ajmer, Udaipur and New Delhi.

By Road: Chittorgarh is well connected by road to major cities of Rajasthan such as Jaipur, Jaisalmer, Bikaner, Udaipur, and the neighbouring states. Several private and state owned buses are available to the city from Jaipur, Indore, and Ajmer.

One of the places to visit in Chittorgarh is the Bassi Wildlife Sanctuary which is bounded by the Vindhyanchal Ranges to its west. It is a picturesque landscape and attracts many nature lovers and photograhers. It is also home to many wild animals like panthers, wild boars, mongoose and antelopes. As the sanctuary sees dwindling numbers of many animals here, visitors coming here have to obtain permission from the District Forest Officer and also get their belongings checked before and after their visit.

One of the major tourist attraction in Chittorgarh is its mighty Chittorgarh Fort. This fort which was built by the Mauryans stands 180 mt high, on top of a hillock and covers an area of about 700 acres. The architectural brilliance of the fort cannot be described in words! It has seven iron gates, each of which are named after a Hindu god. Also the palaces of Rani Padmini and Maharana Kumbha are locted within the fort. It is a hub for archeologists who have much to explore and learn from here. It also attracts photographers who come here to capture the beauty of this majestic architecture.

Located within the Chittorgarh Fort is a waterbody called the Gaumukh Kund. Situated in the western part of the fort, this reservoir is fed by the cracks in the rocks which flow out and get collected here. Tourists coming here can view this beautiful reservoir and also take time out to feed the fishes here. It is also a scenic place in the fort and attracts photographers here.

Another tourist attraction in Chittorgarh is the Kirti Stambh, which is also known as the 'Tower of Fame'. This 22 mt high, seven-storey tower is dedicated to the first Jain Tirthankara, Adinath. The tower has many beautiful carvings and on the second floor there is a sculpture of Lord Adinath himself. It also gives a panoramic view of the entire city from the seventh floor.

A must visit place in Chittorgarh is the Meera Temple which is dedicated to Lord Krishna. The temple owes its name to the Rajput princess, Meera Bai, who was such a great devotee of the lord that she gave up her luxurious life as a princess to serve him. Devotees come here to pray to the lord and also to pay respects to Meera Bai.

A major tourist attraction in Chittorgarh is the magnificient palace of Rani Padmini, which is known as Padmini's Palace. The palace is located within the Chittogarh Fort and has a lotus pond situated nearby. The palace has marvellous architecture and pictorial surroundings that add to its charm. There is also a Neelkantha Mahadev Temple, dedicated to Lord Shiva in the vicinity.

Another place to visit in Chittorgarh is the Rana Kumbha Palace, which also is located within Chittorgarh Fort. This palace is believed to have been constructed in the 15th century and is one of the finest structures in India. Tourists visiting here will be amazed by its architectural excellance. Also you can explore the underground cellars,, where Rani Padmini and other women performed self-immolation to save themselves being dishonoured at the hands of the enemies.

The Sitamata Wildlife Sanctuary covers the Aravalli Mountains and the Malwa Plateau. It is filled with densely populated forests of teak. Animals like leopards, hyenas, jackals, wildcats, porcupines, spotted deer, bears, and four horned antelopes can be sighted inside the sanctuary. It is a place usually frequented by wildlife enthusiasts who come here to catch a glimpse of these animals in their natural habitat.

Comments
Read more about: chittorgarh rajasthan travel nature
Other articles published on Jul 30, 2014
We use cookies to ensure that we give you the best experience on our website. This includes cookies from third party social media websites and ad networks. Such third party cookies may track your use on Nativeplanet sites for better rendering. Our partners use cookies to ensure we show you advertising that is relevant to you. If you continue without changing your settings, we'll assume that you are happy to receive all cookies on Nativeplanet website. However, you can change your cookie settings at any time. Learn more
Change Settings Continue