Let’s Traverse The Small Town Of Bhagalpur In Bihar 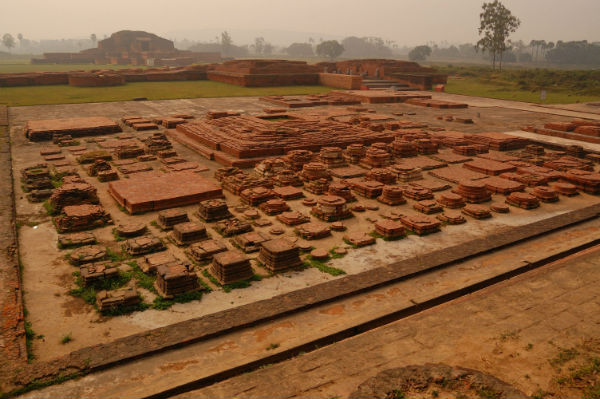 Situated on the banks of the river Ganga, around 220 km from the capital city of Patna, in Bihar lies the historic city of Bhagalpur. Do you know where it gets its name from? 'Bhagdattpuram.' It simply translates to 'The City Of Good Luck'. Hindi is most widely spoken in this fertile land and its regional language is Angika. It is quite famous and spoken by about 50 million people worldwide.

Known to be a major producer of silk, the population of Bhagalpur touches up to 350,000 people. Sugar and rice mills can be noted to be the major industries. Now, let us see! Where have we come across Bhagalpur on television? The Ramayana? The Mahabharata? This mythologically significant city has been shown in epics as the kingdom of Anga, ruled by king Karna.

If you are fond of Indian mythology, you must have heard about Mount Mandar. It is about 52 km southwards of Bhagalpur. The interesting story behind the Mandar Hill is that it was believed that the mighty Gods used to churn pious or holy 'Amrit' from the ocean via this hill with the aid of serpent 'Vasuki', whom they used as a rope.

Chinese travellers Fa Hein and Heun Tsang have marked Bhagalpur as one of the largest trade centres of Eastern India. With a harbour on river Ganga, Bhagalpur is the lovely abode of the first South Asian woman doctor, Kadambini.

HOW TO REACH BHAGALPUR

By Air: The domestic airport located in Patna is about 235 km away from Bhagalpur. It is well connected to all important cities in India via major airlines.

By Rail: It is located in the eastern railway stretching from Kiul to Burdwan. Distinctive stations comprise Sultanganj, Bhagalpur, Kahalgaon and Sabour.

By Road: Bhagalpur is joined to a brilliant network of national and state highways, alongside rural and district roads. NH31 goes via Navgachia sub-division of Bhagalpur district. It directly connects to Patna, passing through Begusarai and Khagaria.

PLACES TO SEE IN BHAGALPUR

You shall definitely miss out on the best if you skip visiting the 'Pride Of Bihar' and that is the magnificent university of Vikramshila. It is about 38 km from Bhagalpur and shall present to you the Buddhist history on a fresh platter.

It is famous enough to be mentioned by Fa Hein and Hieun Tsang in their scriptures! The fascinating remainings of the past are difficult to locate anywhere else and are specifically present here. Scholars and learners are still pulled towards this place and the best part is the 'Vikramshila Mahotsav'. It takes place in February and you shall find boating on the bank of the river Ganges also quite mesmerizing.

Can you recall the Gupta Empire ruling in the 5th and 6th centuries? If we take into account that fabulous past, you can very nicely view it in the rock-cut cravings of Colganj Temple. What is all the more impressive is that a marvellous collection of Buddhist, Jain and Hindu deities from Sultangunj and Kahalgaon have also been discovered. If we believe the legends, then we shall go back to the rule of Emperor Ashoka. Did you know that archaeological experts from outside India are attracted here to keenly study the rock carvings of ancient India?

When you go about 28 km west of Bhagalpur, on the bed of the river Ganges, you can locate Sultanganj. July and August are the peak months during which you shall catch a glimpse of pilgrims consuming the holy water of the north-flowing Ganges.

There is an interesting trek from Sultanganj to Deoghar which is around 80 km and people complete the journey bare-footed up to the temple of Lord Baidyanath in Deoghar and offer the deity holy water. It is well-known for the Baba Ajgaibinath temple as well as the rock-cut carvings. Are you aware of the most exotic statue preserved in the Birmingham City Museum of England? It is a stupa with the bronze statue of Buddha in Abhaymudra.

Now, you might wonder what the word 'Kuppa' even means? 'Kuppa' means a tunnel or cave and 'ghat' translates as 'situated on river bank'. The most intriguing fact is that Maharishi Mehi rehearsed the 'Yoga Of Inner Sound' for quite a few months but where? At a cave in Kuppaghat.

Now, it has been converted into a gorgeous ashram with nice gardens, adorned with sculptures and fragrant orchids as well as paintings and quotes of mythological importance. Did you know that the ashram has a secret passage? Yes! It leads to various destinations but you have to be guided by an attendant.

A peaceful place to spend a nice evening, many devotees can be seen enjoying in a soothing environment on occasions like Guru Purnima.

People of all cast and religions visit this stupendous place located right near the Bhagalpur Railway Station. This mesmerizing mosque was constructed by Aurangzeb and hold your horses to be introduced to the marvellous shrine of Sufi Shahbaz Rahmatullah who is said to be one of the 40 sacred Sufis especially sent to deliver the sayings of Allah.

Join your hands in prayer and receive blessings every Thursday. Visitors scattered all around India and Bangladesh hop in and it is also a faith which people have that the water in a pond located there has medicinal properties. It shall relieve you of illness and snake bites. The basement of this place stores some age-old manuscripts which the Archaeological Survey of India found!

Why think so much? It is time to unearth the beauty of Bhagalpur!