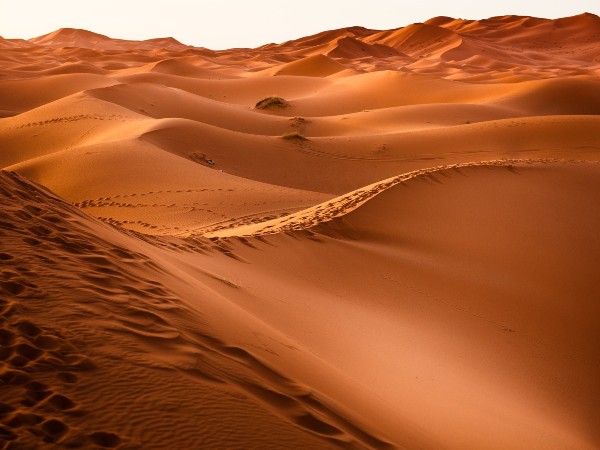 Desert is an ocean in sand mass and can turn a non-believer in magic into a believer. Call it mysterious or nature's patient artwork, it does hold some deep dark secrets disguised under its soothing golden visual treat. And today, we reveal some of the best and incredible mysterious places hidden in the heart of deserts, that must be explored and discovered once in your lifetime!

A sinkhole on the surface in Yemen's desert has been the centre of mysteries and local folklore for centuries. Some do call it 'Hell Pit' and 'Well of Hell' whereas a few have named it the 'Prison for Genies'. Now, travellers have for the first time descended into the bottom of the sinkhole and found not just dead animals but snakes and natural formations made by dripping water.

There's a hidden haven lurking inside a canyon in Oman's Al Sharqiyah Region, with azure water and lush scenery. Known as Wadi Shab, it's a famous escape with three stunning pools to bathe in which are all joined by a hiking trail. One of the most impressive features here is the Wadi Shab waterfall which is hidden in a cave. The only way to access it is to swim through a small gap in the rocks so it should only be attempted by confident swimmers.

Are these orbicular spots, dotted over the Namibian desert in their millions, the work of gods, aliens or, erm, termites? One answer is more sensible than the others and it's also the most logical theory scientists have come up with for the so-called fairy circles, which are only found here and in some parts of Australia. There's still no official explanation and studies continue.

The desert kingdom of Petra is Jordan's prize treasure and wonder of the world. Carved into rock face more than 2,000 years ago by the Nabataeans (a nomadic tribe who eventually settled), it became the capital of their wealthy trade empire. The Siq, Treasury, Colonnaded Street, High Place of Sacrifice, Royal Tombs and theatre are a few highlights of the vast site. When the Nabataean civilisation declined it was taken over by the Romans.

Greek art collective D.A.ST. Arteam created an installation in 1997 near the resort town of El Gouna in the Sahara Desert. The 280,000-square-foot (26,012sq m), spiral-shaped sand sculpture radiates out from a vessel, 100 feet (30m) in diameter, that was once filled with water, which has since evaporated. The piece consists of 89 protruding cones that gradually increase in size. The artwork is slowly being reclaimed by nature and the artists have said they created this unusual installation to serve as an instrument to measure the passage of time.

This rugged, impressive fortress in the middle of the Judaean desert is hewn into the rock face, blending in with the surrounding landscape. Built by King Herod in 30 BC, Masada is one of the most important archaeological sites in Israel. Its UNESCO-listed camps, fortifications and attack ramp that encircles the complex are incredibly well-preserved.

Around 500 miles (805km) north of Adelaide and 430 miles (692km) south of Alice Springs, the two nearest major settlements, Coober Pedy is as remote as it gets. The townspeople are renowned for living in underground residences (or dugouts) that allow them to escape the extreme heat and dust storms so common in the Australian outback. It's also known as the opal capital of the world after the semi-precious stones were discovered here in 1915.

Kolmanskop was once one the world's richest towns, thanks to the discovery of diamond deposits in the early 20th century. Around a thousand workers were brought in to mine the site in the Namib desert, which lies about nine miles (14km) east of the harbour town Lüderitz. The town thrived until an even bigger diamond deposit was discovered in 1928, 160 miles (257km) south of Kolmanskop, causing many workers to leave for pastures new.