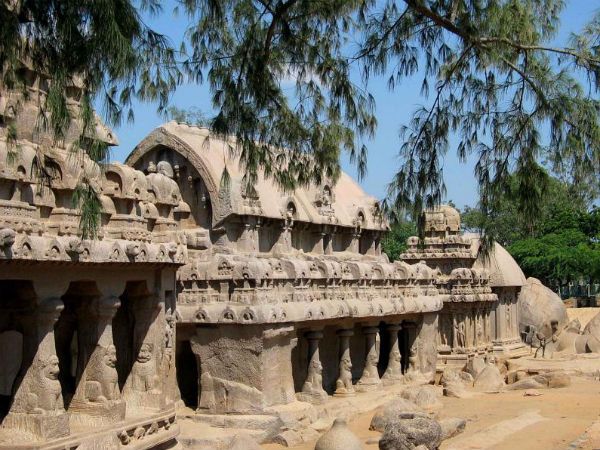 Didn't we all get excited by the sci-fi chariots used in the hit movie 'Baahubali'? The villain Bhallala Deva's (Rana Daggubati) chariot in the war scene did certainly raise the eyebrows. Well, chariots have been an integral part of the Indian mythologies and it is believed that chariots were the vehicles used by the kings. In the modern India too, they hold importance regarding the temple chariots.

Pancha Rathas are the monolithic chariot structures at Mahabalipuram. They were constructed during the reign of Pallava Kings Mahendravarman I and Narasimhavarman I.

An interesting aspect is that each ratha is named after the Pandavas of the Mahabharata fame.

So, they are also called as Pancha Pandava Rathas in Mahabalipuram. However, the records suggest that these chariots has no relation with the epic. Somehow, the names have been synonymous with the Pancha Rathas.

The row of Pancha Rathas

Pancha Rathas are not movable rathas and they are carved out of single rocks. The five chariots look more like temples than the temple carts. Each of them has different structures with intricate sculptures etched on the outer walls and shikharas (tower).

Four out of five rathas are sculpted in a single row; there is a slight increase in the height of each rathas from North to South. Draupathi Ratha, the wife of 5 Pandava brothers and Arjuna's chariot are built on a single platform. Draupathi Ratha is small and houses an idol of Durga inside.

An overview of Pancha Rathas

Another curious thing is the existence of Nandi (bull) statue in front of Arjuna Ratha. Usually, Nandi in front of a temple is used to indicate that it is a Shiva temple. However, there is no statue or lingam inside the Arjuna Ratha.

The other two in the line is the bulky Bhima Ratha and next to it is the tall Dharmaraja Ratha. Maybe looking at the width of the Ratha, it might have been named after Bhima (the strongest Pandava).

Dharmaraja was the eldest of all Pandava brothers and maybe that is why the tall ratha is named after him. Just opposite to this line of chariots is Nakula-Sahadeva Ratha. In front of it is a big unfinished monolithic statue of an elephant.

Curiously, it is a customary tradition in India to carve the vehicles (animals) of the gods facing the temples. Here Nandi and Elephant are placed in front of the rathas indicating that these structures were meant to be the temples.

Sadly, the Pancha Rathas were unfinished; records suggest that the death of the King Narasimhavarman must have stopped it. Even the change in administration might be the reason for the incomplete architecture.

Today, Pancha Pandava Rathas are the best structures in the Group of Monuments at Mahabalipuram. A trip is a must to this ancient architecture.