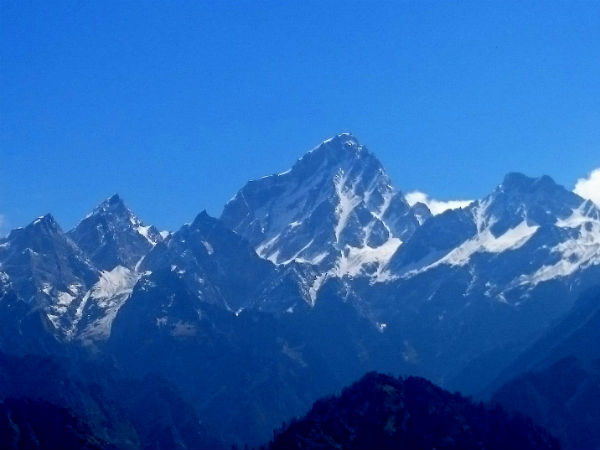 They say the word "Om" is over 11,000 years old. Its sound first originated from the creation of our cosmos, when there existed absolutely nothing apart from a tranquil, quiet void. Then out of the nonentity, an entity was born. And since then this sound has been resonating and travelling, surpassing the boundaries of space and time to become the most powerful sound of the universe that heals and unifies your mind, body, spirit and soul.

You might say all of this is purely mythological. But what if we told you that there exists a mountain in the Himalayas which naturally has an impression of the Om formed merely due to the deposition of the snow? Unbelievable? "It's among those rare of rarest occurrences that leave even the atheists confused."

For those who are still pondering over the geographical location of Om Parvat, well, it marks the tri-junction where the borders of Tibet, Nepal and India meet.

Excited to explore the untouched trek route to Om Parvat? Tie your laces, pull up your rucksack and follow us as we embark on an exhilarating journey to the Himalayas in order to catch a glimpse of this mystical mountain peak up close. It's surely going to be an experience that remains etched in your memory forever.

The Om Parvat trek ranges from 2,200 m to 4,752 m in elevation and represents one challenging trek in the Kumaon Himalayas region that quakes the soul of several trekkers.

Your pilgrimage to Om Parvat starts from Dharchula, which is a 12-hour Jeep ride from Kathgodam. It is at the subdivisional town of Dharchula where you need to get your medical tests done and obtain the Inner Line Permit before you can start trekking toward Adi Kailash.

Once all the permits are in place, start from Dharchula early in the morning to drive to Tawaghat. It's from here that your trek to Pangu begins. The trek passes through enchanting valleys leading you to the Bhotia (local tribe) village of Pangu. Plan your dinner and overnight stay at camps there.

Next morning you need to trek down to Juyntigad, which is followed by a steep ascent to reach Sasa village. The next gradual climb is up to Tihalakot, and by evening you get to reach Sirkha ground. This place makes for an ideal overnight camping site.

The following morning trek is up to the village of Malpa, which on a fateful night of August 1998 was wiped out, killing 380 people, by a devastating landslide. This trek is demanding up to Garbyang and includes a steep down leading to Kali river. Spot the magnificent 100 ft high Najang waterfall en route, after which a zigzag trek leads you to Malpa.

Next day awaits another challenging yet mesmerising trek to Budhi. The last couple of hours till Budhi village is one steep ascent that literally puts your legs to test.

From Budhi, your trek starts with a steep climb to Chhiyalekh. The hike passes through a lush green valley, carpeted with numerous wildflowers, and if the weather is clear you can also catch a glimpse of Mt Annapurna and other major Himalayan peaks. Arrive at Gungi by evening, have your dinner and put up your tents to spend the night.

In the morning, you'll be trekking up to Kutti, the last village of your trek. On your way, check out the magnificent sight of the Api and Nampha peaks and on reaching Kutti, get ready to be awestruck by the local fables that the people here have to share about their village.

The next morning, start fresh to trek up to Jollingkong-the base camp of Holy Mt Adi Kailash (20307 ft). Jollingkong has a check post of ITBP (Indo-Tibet Border Police). Arrive at Jollingkong by evening and spend the night either in your tent or in fibre huts, dreaming about beholding the mighty Om Parvat the very next day.

This is your D-Day. You're going to witness one of the few unexplained wonders of nature-the Om Parvat. The trek here is a difficult one-steep ascent and thin air make the going even tougher. Although Navidang, your final destination, is not over 7 km away, given the tough trail, it might take you almost 4 hours to reach the place.

Make sure you're well acclimatised and more importantly, your stamina should be willing to run those extra miles. You won't even realise when you blink for once and open your eyes to the sternly standing Om Parvat with a perfect "Om" etched on its top. Yes, you're witnessing the biggest Om of this world, mystically formed by the snow that has fallen on its top black ridges.

The journey to Om Parvat is much more than just a trek. It hosts a vast collection of mythological folklore around it that blur the line between myth and reality. And all of it is waiting out there to be explored. So just let your journey begin!

If you've already trekked up to Om Parvat, do share your experiences with us in the comments section. Your feedback might help other travellers on their future trips.