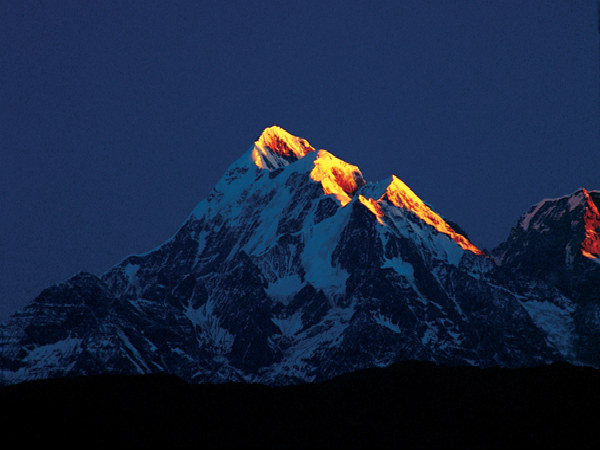 Uttarakhand is one of the most scenic and picturesque places in India. Apart from the mountains, valleys and the rivers flowing through various regions of the state, Uttarakhand is also one of the most adventurous spots of India. Known for its adventure tourism, Uttarakhand harbours scope for various daring activities like rock climbing, rappelling, river rafting, mountaineering and many more.

Mountaineering in Uttarakhand by the steep slopes of Himalayas is something that all trekkers and mountaineers will aspire for. Climbing these slopes will not only reveal the hidden beauty of "Land of Gods", but will also acquaint one with the lush greenery, myriad floral variety and rare wildlife species.

Here are some of the peaks which enthusiasts mountaineers can always harp on.

Nanda Devi lies in the Garhwal region of Himalayas at an altitude of 7816mt. Ideal time to trek this region is between May to September. Nanda Devi Sanctuary is a protected area which lies close to this peak. Chamois, Pithoragarh and Bageshwar districts lies at the border of the eastern part of Nanda Devi. Climbing this second highest peak of India is indeed an adventurous one.

Group of five Himalayan peaks are known as Panchachuli which lies by the edge of Eastern Kumaon region. It is supposedly named after the "Five Chulis" of Pandavas. These ranges from 6334mt-6904mt. Gori Ganga and Dhauli Ganga valleys border these ranges. April, May, September and October are the ideal months to climb these ranges. Panchachuli II is the highest peak of all. Snow capped peaks with Deodar forest is what looks stunning once one reaches the peak.

This peak lies in Western Kumaon region and lies at an elevation of 7122mt. It is close to Bageshwar district and mountaineers can start their expedition from this place. Trishul I,II and III are highly renowned for skiing which is one of the favourite winter sports of Uttarakhand. Roopkund Lake also known as Mystery Lake lies at the foothills of these ranges.

Chaukhamba has four peaks which lies at an elevation of 7138 m, 7088 m, 6995 m and 6854 m. It is a part of Garhwal Himalayas and the highest of these peaks lies above the Gangotri Glacier. Guptakashi and the Vasuki Tal are the places from where the magnificent view of Chaukhamba mesmerises the mountaineers. June to September is the ideal time for mountaineers to venture out on this expedition. One should not miss out the Shivling Peak while climbing Chaukhamba.

Shivling in Garhwal Himalayas lies at a height of 6543 m. Mountaineers can take Chaturangi Vamak route to climb this peak. The peak rises like a pyramid above Gangotri glacier. The pictorial beauty of Shivling matches the aura of Matterhorn in the Alps. Tapovan lying between Shivling and Gomukh can be visited for pilgrimage purpose. Rocky landscape and snowy clusters makes mountaineering risky and difficult.

Swargarohini lies in Bandarpunch Range in Uttarakashi district. It is a part of Garhwal Himalayas and is renowned for steep slopes which makes mountaineering highly challenging. May to September is the ideal time to trek here. Snow capped peaks of Swargarohini is the source of water for Tons river. 32 km trek from Badrinath will take one to the base camp of the Swargarohini.

Bhagirathi I, Bhagirathi II and Bhagirathi III comprises the Bhagirathi Peak which lies at an elevation of 6,856 m, 6,512 m, and 6,454 m respectively. They are a part of Garhwal Himalayas. Mountaneering the Bhagirathi Peak will take one to Gaumukh. Gaumukh is the place where Gangotri Glacier ends and River Ganga originates. Mountaineers can start their climb from Joshimath through Badrinath and Mana road. May top September is the ideakl time to climb this perak.

Neelkanth Peak is also known as "Queen of Garhwal". The panoramic view of snow capped Neelkanth Peak from Badrinath is bewitching. Nar-Narayan range borders this peak and mountaineers while climbing can explore various species of flora and fauna. It lies at an elevation of 6597 m, and is also trekked by pilgrims apart from mountaineers.

The name is derived from "Om" symbol that can be seen on the peak. Artistically framed in snow, this "Om" looks divine in beauty to the m,ountaineers who dare to climb this peak. It is a part of Kumaon Himalayas and can be climbed while one is on the way to Kailash Mansarovar. Parvati Lake and Jongling kong Lake are other sightseeings which mountaineers should not miss while climbing Om Parvat.

Being the source of River Ganga, Gaumukh is one of the wanted spots of pilgrims. This glacier lies at a distance of 18km from Gangotri Glacier. It is also the source of river Bhagirathi which along with river Alaknanda flows through the Indo-Gangetic plain. Mountaineers and pilgrims have many spots to explore on their way to Gaumukh.