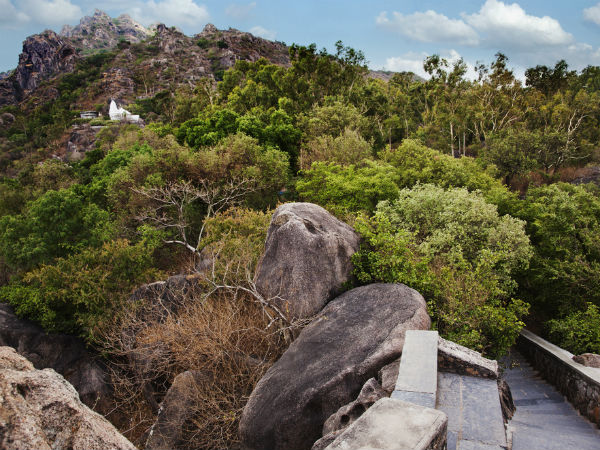 Mount Abu Wildlife Sanctuary is located in Rajasthan, in one of the oldest mountain ranges of India - the Aravalli Range. It was declared as a wildlife sanctuary in 1960. The sanctuary is 7 km long and is 300 metres in width. This means you will not get tired of walking long distances and you do not have to worry about missing anything on either side.

There is an evergreen forest that is lush, thick and verdant on the other side of the sanctuary. Mount Abu Wildlife Sanctuary is a much-desired destination for eco-tourism. It crosses many mountain highs, from 300 metres to 1722 metres at the Guru Shikhar Peak.

Mount Abu remains pleasant all round the year, therefore any time of the year is a good time to visit the sanctuary. However, April to June is recommended, as it is an ideal time to explore the sanctuary in all its beauty.

Muffler, cap, binoculars, camera, water, snacks, walking shoes, and sun glares are some of the essential things you must carry in your backpack.

By Air: The closest airport to Mount Abu is Udaipur, which is 185 km away. However, the airport at Ahmedabad, which is at a distance of 221 km, has better connectivity. You can hire a taxi to reach Mount Abu from here.

By Rail: Abu Road is the nearest railhead to Mount Abu, at a distance of 28 km. This station is well connected to major cities like Delhi, Ahmedabad, Jaipur and Mumbai. You can take a bus or a taxi from Abu Road to reach Mount Abu.

Route 2: Ahmedabad - Gandhinagar - Visnagar - Palanpur - Abu Road - Mount Abu Wildlife Sanctuary. This route can be taken via NH 27 too. It takes 4 h 51 min and pans 238 km on this route.

Since the roads on route 2 are better, it is advisable to opt for this route. Start from Ahmedabad early after a typical Gujarati breakfast of Khaman Dhokla, Khandvi and Handvo. Stop at Sabarmati Ashram, a spiritual site built at the former home of Mahatma Gandhi. It is now converted into a museum and walking tours are also offered.

The Calico Museum of Textiles at Ahmedabad is a prime textile museum in India. Sardar Vallabhbhai National Memorial is a museum and exhibition area dedicated to the Iron Man of India at Moti Shahi Mahal. Jama Mosque in Ahmedabad has splendid architecture built during the reign of Ahmed Shah I.

If you are travelling with children, you can make time to take them to Gujarat Science City, where science is explained in a fun way that can easily be comprehended by children. Catch a cinema at Sunset Drive in Cinema, which is a drive-in theatre with Asia's biggest screens.

Then, drive to Gandhinagar and stop at the famous 10-storeyed Akshardham temple. The Indroda Dinosaur and Fossil Park in Gandhinagar is the only dinosaur museum in the country and is described as the second largest hatchery of dinosaur eggs in the world. It is fondly known as India's Jurassic Park.

Drive further to reach Mount Abu. The Dilwara Jain Temple is one of the finest Jain temples in the world known for its marvelous marble architecture. Nakki Lake is a gorgeous lake that is believed to be dug out by Angels and Gods using nails, and hence the name.

Guru Shikar is the highest peak in the Aravallis that offers some picturesque postcard-worthy beautiful shots of sunrise and sunset. It is also home to some beautiful temples. Some of the other points of interest at Mount Abu are Adhar Devi temple, Trevor's Crocodile Park, Gaumukh, AchalGarh, and the Sunset point.

The Aravalli ranges have a rich diversity in floral culture. The foothills contain xeromorphic subtropical thorn forests, although the rivers and tributaries are bound by subtropical evergreen forests. Mount Abu Wildlife Sanctuary is the only place in Rajasthan where one can find orchids. This eco-system is also rich in bryophytes and algae.