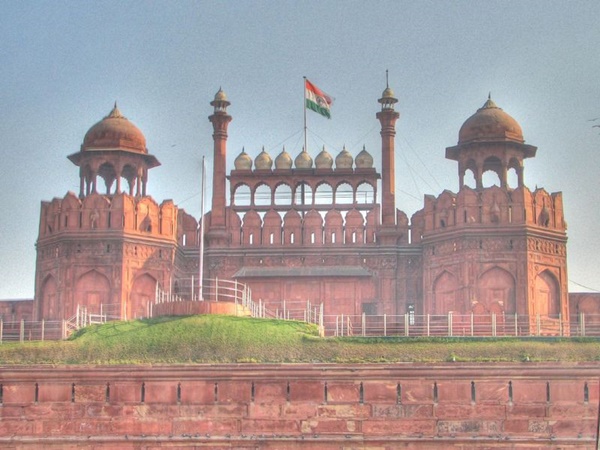 India is best known for its colourful culture and fascinating heritage. With thousands of years of rich history, India is blessed to have many beautiful and historically important monuments spread all over India.

Most recognised by the UNESCO World Heritage Site, the famous Indian monuments include the beautiful Taj Mahal, the sacred Golden Temple and the cultural site, Hawa Mahal. Discover and experience the magnificent insights into India's rich heritage and ancient architecture.

Here are the most visited monuments in India that you must not miss when traveling across this wonderful country.

No surprises there! Taj Mahal considered one of the Seven Wonders of the World is the most popular tourist attraction in the country. A symbol of love, the Taj was built by Mughal Emperor Shah Jahan for his queen Mumtaz.

It presents a remarkable example of the fusion of the finest features of the Indian, Persian and Islamic architectural styles.

Starting in 1632, its construction was completed in 21 years by thousands of craftsmen, artisans and masons in 1653. The focal point of attraction in the palatial building is the tomb of his wife. Erected on a square platform, the white marble tomb stands under an arched dome and can be reached through an arched gate.

Undoubtedly, Taj Mahal is one of the universally admired masterpieces of the world's heritage.

The shape of the temple is of a massive chariot with sumptuously engraved stone wheels, pillars and walls. A major part of the structure at present is in ruins. The temple is a UNESCO World Heritage Site.

Red Fort in Delhi is one of the most popular tourist attractions. A tour of the Red Fort is bound to make you feel patriotic.

The fort remains one of the architectural marvels of the Mughal era. It is one of the monuments in India which has been granted the status of a UNESCO World Heritage Site. It was awarded this distinction in 2007.

Even though British ruined the fort, post-Independence, authorities have managed to preserve the remaining parts of the Red Fort. These interesting facts about Red Fort, depicts its grand period and its vibrant history!

Qutub Minar, a monument built in early Indo-Islamic architecture style, is the tallest brick minaret across the world. Surrounded by many other prime attractions, Qutub Minar still stands tall among other attractions the country boasts of.

The Iron Pillar inside the Qutub Complex is known for its hidden attributes and mysteries related to it. There are 379 stairs inside the tower of Qutub Minar, which leads to the top.

The whole structure is built using red and buff sandstone. It also has verses from the Quran carved into it. The Qutub Minar is a little tilted to one side. This tilt is due to the number of additions and renovations done on the structure over the years.

There are protruding balconies that surround each storey of Qutub Minar. It is said that there were around 27 temples at the site which were destroyed by the invaders. The sight of this glorious monument takes you back to the rich history of India.

Agra Fort, also sometimes called the Red Fort, is the forerunner of the iconic and emblematic Red Fort of Delhi in respect of architectural style, design and the red colour. Both the buildings are made of red sandstone. This explains why it reminds the tourists of Red Fort of Delhi as soon as they draw closer to it. You can also get a splendid view of Taj Mahal from the Agra Fort!

This 94-acre fort is a UNESCO World Heritage Site and one of the must-visit attractions of Agra.

Built purely out of red sandstone, this expansive architecture stands out against the soft azure of the sky. Within the premises of the fort lie the most exquisite structures of the Mughals. Each and every one of these edifices has remarkable handiwork and ornamentation that make this place a delight for every history and architecture lover.

The Bibi-ka- Maqbara is located on the right bank of Kham River. The beautiful mausoleum of Rabia-ul-Dauranialias Dilras Banu Begum, the wife of the Mughal Emperor Aurangazeb (1658-1707 A.D.) is locally called as Bibi-Ka-Maqbara.

Attaullah was the architect of this mausoleum and he intended to replicate the famous Taj Mahal. However, despite the layout that comes close to Taj Mahal, the architecture fails to reproduce the aura of Taj. Hence, it is considered to be a poor imitation of the same.

When we talk about historical Indian monuments, we cannot miss out on mentioning the lovely Charminar in Hyderabad.

This historical structure is now associated with Hyderabad in a big way and has even gained global recognition. Charminar gets its name from two Urdu words, 'char' and 'minar', the combination of which literally means "four towers". The structure of the tower spells magnificence and radiates the architectural grandeur of ancient times.

It is a great specimen of the Qutub Shahi architecture.

Golkonda, also known as "Round shaped hill" is a citadel and fort in Southern India. Located at a distance of 11 km from Hyderabad is the historic fort of Golconda. One of the biggest forts in the Deccan Plateau, it was the contribution of various rulers from various dynasties which made this fort an architectural marvel.

The fort was under the rule of the Kakatiyas of Warangal, then the Bahamanis and later Aurangzeb. The fort was home to all the dynasties which ruled Hyderabad. Constructed around 800 years ago it still stands tall and serves as a major tourist draw.

Ellora Cave is perhaps the most visited caves in India. It belongs in the state of Maharashtra and is believed to have been carved out and constructed in the beginning by the Rashtrakuta dynasty. A total of 34 caves, these constructs basically fall under three groups - the Buddhist group, the Hindu group and the Jain group.

The Buddhist group consists of the first twelve caves, the Hindu group takes up the next seventeen, while the Jain group has five caves. All the excavations are in close proximity, reflecting the harmony these very religions prevailed with during those times.

The caves can be visited anytime during the entire year. The climate is majorly cool and pleasant. Ellora Caves come in the top ten places in India worth visiting. Culturally deep and ethnically rooted, explore these caves to get a better insight into the three major religions that revolutionised India and the rest of the world.

Shaniwar Wada continues to be a reflection of the proud Maratha empire. "A big fort right in the middle of a busy city stands to remind a glorious past. A movie is made which relates to an age old lover story that once painted this weathered fort in red"! Shaniwar Wada, like any other heritage, holds many untold stories which are now stashed in the history books.

You shall be wonder struck at the beautiful forts and fountains it has and the magnificent statue of Baji Rao I, which adorns the entrance of the fort is quite praiseworthy. However, the fact that it is considered one of the most haunted places in Pune cannot be ignored.