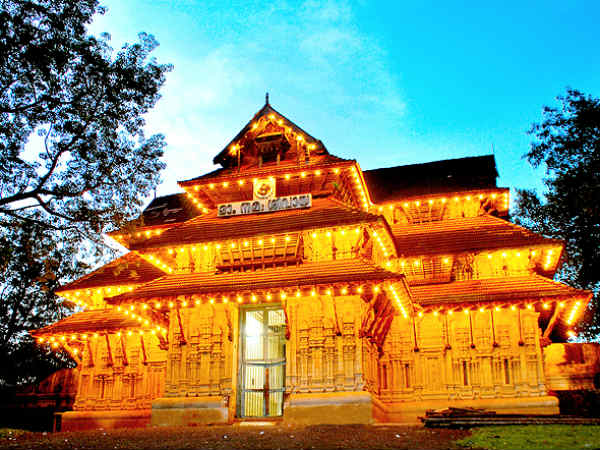 God's Own Country, Kerala is immensely popular for its natural beauty which is spread in the form of backwaters, lakes, hills, valleys and waterfalls. Tourists from all over the world visit India to explore the richness and grandeur of Kerala. Such is its popularity today that it can be found on the bucket list of every nature lover and traveller. But do you know Kerala is equally significant for its ancient monuments? If not, then let us tell you that Kerala is home to some of the most beautiful ancient monuments in the country.

These architectural marvels attract millions of architecture enthusiasts and history lovers. If you think you are one amongst these history-loving travellers, then following are the places you must consider visiting this season. The list includes age-old religious sites, palaces and forts.

Located in the beautiful city of Thrissur, Vadakkunnathan Temple is one of the oldest-known temples in the country. It is dedicated to Lord Shiva and is believed to have been constructed thousands of years ago by Lord Parashuram himself, the sixth incarnation of Lord Vishnu.

Therefore, it is of great historical as well as religious prominence. Surrounded by a beautiful garden, this millenniums-old temple has beautiful gateways and is built in the typical Kerala style of architecture.

It is noted amongst tourists for its magnificent wood carvings and wonderful wall paintings. It is rightly said that no traveller can afford to miss Vadakkunnathan Temple while in and around Thrissur. After all, it is one of the few temples in the district which are also of historical as well as architectural importance.

Built in the mid 17th century, Bekal Fort is located on the shore of the Arabian Sea in the Kasargod district of Kerala. It is said to be built by a ruler of the Nayakas of Keladi. However, it has also been ruled by the Kingdom of Mysore and other empires in the past.

Therefore, it is a popular weekend destination for history lovers. On account of its picturesque location, it is also a famous getaway for beach lovers. Did you know that Bekal Fort is the largest fort in Kerala?

With strong bastions and beautiful battlements, this age-old fort is a must-visit destination for every traveller out there who desires to learn about the history of Kerala. The presence of lush greenery in the surrounding regions of the fort makes it look more photogenic.

Built in the year 1567, Paradesi Synagogue is located in Kochi, and hence it is also sometimes referred to as Cochin Jewish Synagogue. It is said to be one of the oldest active synagogues in the world and is known for its incredible interior.

With beautiful glass chandeliers, ancient scrolls of law, gold crowns and age-old copper plates, it is believed to be one of the most beautiful synagogues in the country. Therefore, it allures thousands of tourists every year. If you would love to capture the best of ancient decor on your camera, then Paradesi Synagogue in Kochi is your destination.

Undoubtedly, the most popular and most significant temple in Kerala is Padmanabhaswamy Temple. Located in the city of Lord Anantha, i.e., Trivandrum, Padmanabhaswamy Temple is dedicated to Lord Vishnu and is said to be the richest place of worship in the country. It is a fusion of the Kerala and Tamil styles of architecture, and hence it must be visited by every architecture enthusiast.

As it is believed to have been established thousands of years ago, it is of great historical significance too. Every year, it witnesses tourists and Hindu devotees in millions. It is a major pilgrimage site amongst Hindus, especially amongst Vaishnavites, as it is one of the 108 holy abodes of Lord Vishnu.

Another place of architectural prominence in Trivandrum, Kanakakkunnu Palace is one of the most beautiful royal buildings in the state. It was built during the reign of the Travancore King Moolam Thirunal about 100 years ago. Surrounded by a beautiful garden and boasting of Kerala style architecture, this lovely palace is now used for cultural programmes and other important meetings.