Nativeplanet
»
Travel guide
» Head Out To These Monsoon Destinations In India

Head Out To These Monsoon Destinations In India 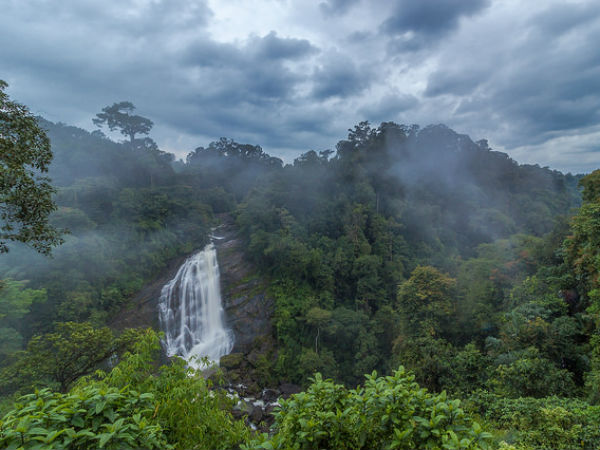 The land is dried up after the hot summer, thirsty and parched, the trees look towards to the sky hoping for that blissful downpour which would set their leaves and roots wet, and the clouds would gather around in the sky. The first drops fall and make a hiss on the dry on lands which were long deprived of the rains and slowly the love blooms and soil gets covered by a vivid green.

Right from their onset, the monsoons are revered all over the country. The month of May ends, the hot summers slowly giveway to the calm and tranquil monsoons. What is more blissful than the smell of wet earth, the water droplets on the trees, that one downpour which would get you drenched and a hot cup of tea? Monsoons would indeed bring out the romantic in everyone.

Monsoons in India are truly an ecstasy of bliss, beauty and relief from the scorching summer and they are meant to be enjoyed. Heavy rainfall, umbrellas, water clogged roads and puddles of water are some of the things which would come to our mind when one thinks of monsoons.

To make a quick escape to some these experiences and bring out a change in your opinion about the rainy season, head to some of the places where you can truly feel the cool winds, light raindrops and that smell of earth.

Take out your umbrellas and begin your splash with the monsoon happily through these 10 monsoon destinations in India.

The charming city which is filled with historic structures all around which boasts its regal grandeur. The city is home to the most well-designed palaces, havelis, buzzing streets and not to forget the beautiful lakes.

Also known as the Venice of the East, the city comes to life during the months from July to August but remains a forgotten destination amongst travellers all throughout the monsoon season.

The Monsoon palace which was built in 1884 surrounding the Aravallis by Maharana Sajjan Singh for the main purpose to keep a track of the movement of the monsoon clouds, initially known as Sajjan Garh Palace, it was recently opened for public. The bird's eye view which the palace offers after light showers of rain is simply remarkable.

It is surrounded by the snow-capped peaks of the Kedar Range, Nilkanta, Chaukhamba, Bandarpunch, Kalanag and Yellow Tooth. Wrapped by the thick forests and lush greenery, this place is a trekker's delight and on a clear sky day you catch a mesmeric reflection of these peaks on the waters of this lake.

Deoria Tal is a a mix of mythology and natural beauty, during the monsoon the small lake would be filled with emerald green water. The lake is believed to be the bathing places of the Gods as per the Puranas.

The wave like hills of Munnar is South India's prime tea growing regions, which are filled with green leafy tea plantations. The low mountain panorama is simply marvelous especially during the monsoons when the mist covers the mountain tops.

Although many tourists avoid Munnar during the rainy season, it is actually one of the best times to visit the hill station if you are on the lookout for a silent holiday. The place would be covered with lush greenery and the monsoon here for sure has a charm of it own.

The monsoon season is also one of the best times to enjoy discounts on hotel tariffs and explore the place without many tourists.

The hub of terracotta architecture, crafts and culture Bishnupur which was the capital of the Malla dynasty of Mallabhu for almost one thousand years which made this place one of the major centers of culture in Bengal today.

Most of the terracotta temples here are built during the 16th century and today these play a huge part in the lure of Bishnupur. The month of August marks the beginning of the monsoon here and goes up until early October.

The beautiful terracotta structures get washed by the rains and brings out the reddish orange hues which are truly eye-catching and contrasting to the greenery around the place.

A drive of 6 hours from Delhi would take you to the Jim Corbett National Park which is an absolute treat for wildlife lovers. There are rumours which say that the National Park is closed during the rainy seasons for safety reasons and also as it is the breeding season for many animals. Out of the four zones of Dhikala, Bijrani, Durga Devi and Jhima, the Jhima zone is open to visitors throughout the year.

One would be surprised to know that rafting in Jim Corbett is only possible during the rainy season as the Kosi river remains depthless rest of the year. It also becomes easier to spot animals like boars and antelopes and also certain birds like parakeets, barbets and quails.

The Rann of Kutch is home to 18 cultural tribes which makes the place a favourite amongst travellers. The desert plains which are never-ending provides a surreal experience during the monsoons.

The place gives you a dreamlike feel during the monsoon as it gets submerged in water, and during rest of the year, the place is simply an enormous stretch of white salt which gives it a white desert kind of look.

There is much more to Goa than just the beaches and the picturesque landscapes during the monsoon season. The Dudhsagar falls is one such place to experience the thrill of the rainy weather, located in the Southern part of Goa and in close proximity to the Karnataka border, the waterfall is at its best throughout the monsoon season.

The waterfall at Dudhsagar resembles that of a flow of milk down the mountains from a distance and is a picture perfect moment to capture the water flowing through the green forests.

Ladakh is truly an amazing place to visit especially during the monsoon season. The place does not experience rains like anywhere else in India which makes it a perfect time to visit here. The Buddhist monasteries and the historical monuments of Leh are one the major tourist draws here.

Leh has more to offer when it comes to nature and adventure seekers. White water rafting is something which can be done during this period along with the Indus river in Leh and as well as the Shayok river in the Nubra Valley.

Famous for its numerous lakes, cascading waterfalls and beautiful mountains, this hilly retreat is one of the favourite destinations amongst the lovers of adventures and nature lovers. A typical woody countryside Malshej Ghat is well-known for its rich flora and fauna.

The beautiful valleys and woody forests here answer to the call of monsoon by showcasing its beauty of the lake and waterfalls along with the misty fog at the peak. The beauty and charm of this marvelous hill station is more evident when it is covered with heavy fog and dark clouds.

The number of curious travellers visiting Shantiniketan keeps increasing year by year. People come here to get the feel of the place which was built and nurtured by Rabindranath Tagore fondly called as Gurudev. Though the place is open to visitors throughout the year, it looks more beautiful during the rains.

Shantiniketan would resemble a lush green resort after the rain casts its spell by wetting the earth.

Comments
Read more about: travel nature india monsoon karnataka udaipur kerala gujarat
Other articles published on May 29, 2017
We use cookies to ensure that we give you the best experience on our website. This includes cookies from third party social media websites and ad networks. Such third party cookies may track your use on Nativeplanet sites for better rendering. Our partners use cookies to ensure we show you advertising that is relevant to you. If you continue without changing your settings, we'll assume that you are happy to receive all cookies on Nativeplanet website. However, you can change your cookie settings at any time. Learn more
Change Settings Continue