Discover The Magical Majuli, An Island Enclosed By The Mighty Brahmaputra River 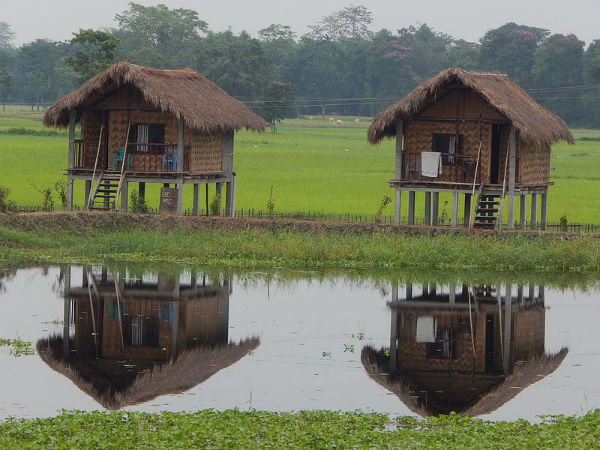 Situated in the heart of Assam is the Majuli Island. Majuli means a land in the midst of two rivers. Scattered along the flowing stream of mighty Brahmaputra River are several islands. Majuli is the biggest among them that is encapsulated by the Brahmaputra River. It measures about 136 sq mi. However, about a century ago, before erosion, the island was much larger (340 sq mi).

Unfortunately, Majuli is disappearing at an alarming rate due to soil erosion and heavy floods that are reducing the size of the island gradually. It is predicted that Majuli island may disappear in the next 15 to 20 years. So, make sure you plan a trip soon to this gem of Northeast India.

The island is home to eclectic tribal communities including Deoris, Sonowal Kacharis and Misings. Majuli Island is the biggest lure for travellers visiting this part of the country. The sacred island is a medley of enthralling views of beautiful wooden boats, rustic countryside side, the lush green paddy fields, extended water body and vibrant culture.

It is also the cultural and art hotspot of Assamese Vaishnavite philosophy. The spiritual aura, untouched beauty, remote villages, gentle-hearted local people make Majuli one of the sought-after holiday destination.

How To Reach Majuli

By air: Jorhat Airport located in Rowriah is about 7 km from the Jorhat city. The airport is well-connected to several cities in the country. Lokpriya Gopinath Bordoloi in Guwahati, Assam is the nearest International airport that is 323 km from Jorhat. From Jorhat, there are private buses available to both Kamlabari Ghat and Neemati Ghat from where ferry boats will take you to the Majuli island.

By train: Jorhat Railway Station in Jorhat District is the nearest station to Majuli.

By road: Jorhat is the nearest place that is connected Majuli. There are private and state buses from Guwahati as well as other places to Jorhat. From Jorhat, the ferry ride to the island takes about an hour.

Summer (March to June) is usually hot and humid in Majuli which is not comfortable for sightseeing. Hence, it is not a recommended season. Monsoon is from July to September. Although the weather is pleasant and brings respite from sultry heat, incessant rainfall causes an overflow of the river. Hence, monsoon is also not an ideal time to travel to Majuli. Winter from October to February provides the best setting to enjoy the pleasant weather, nature and fascinating glimpses of the island.

Things To Do In Majuli Island

Devotees visit in hordes to Satras every year, especially during the Raasleela festival. Dakshinpat Satra is one of the popular Satra on the island. It was built in 1584 that features an ornate gateway etched with motifs, flowers and animals. It is not just the Satra that is captivating but also the countryside roads that lead to it are entrancing.

Kamalabari Satra, Garmur Satra and Auniati Satra are some of the other beautiful Satras on the Island. Exploring these Satras is a soul-enriching experience. These are home to several cultural relics and artefacts like ancient weapons, literary manuscripts and jewellery. You will need a day or even more to visit these Satras. Each Satra has its own distinctive characteristics. Originally there were 64 Satras, but now only 31 are in use.

The golden structure of Tengapania is a popular attraction in Majuli. Away from the hustle-bustle of the city, you will find yourself in the midst of beautiful nature in Tengapania. The structure is built in the unique Ahom architectural style.

The traditional masks of Majuli island are quite famous. Hemchandra Goswami conducts workshops on the island known as Natun Samaguri Satra. If you want to learn more about the interesting process of making a variety of masks then it is a must visit the place. Depending on the complexity and design, the mask can take a couple of weeks to months in order to complete. Traditionally, the masks are used for theatrical performances and festivals.

Raas Leela Festival is celebrated zealously in the month of November. Thousands of people visit the Satra to witness this much-awaited festival. Raas Leela is a festival of music, dance and theatre. Ali aye Ligang is yet another popular celebration where local beverages and food are served.

Comments
Read more about: assam
Other articles published on Jun 13, 2019