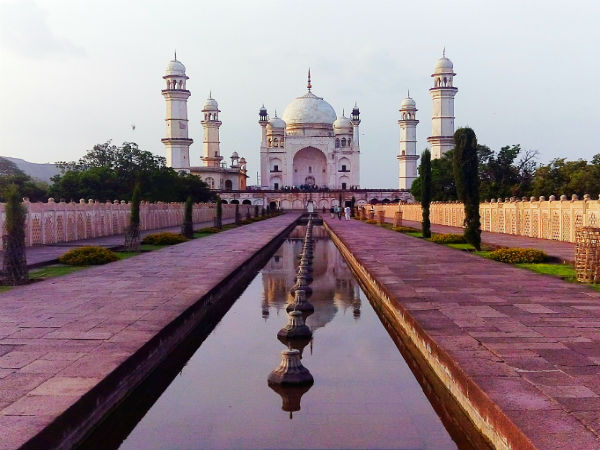 Taj Mahal is considered as the symbol of true love and has been standing tall for centuries ever since the Mughal emperor, Shah Jahan, dedicated it to the loving memory of his beloved wife, Mumtaz Mahal. The grand white marble tomb located on the banks of Yamuna is not just a symbol of love but is also considered as the pride of India.

Named as the most photographed monument across the world and one amongst the seven wonders of world, appreciations for Taj Mahal keep pouring in. Such is the beauty and charisma of the Taj Mahal that it has inspired many structures and has been cloned and replicated into many other monuments across the globe. We bring to you some of these lookalikes, which are located in various parts of the country.

Gujarat's Taj replica is perhaps the most stunning and the most neglected amongst the many. Located amidst the dusty M G Road in Junagadh, the structure is a blend of European, Islamic and Hindu styles of architecture. The monument has Gothic columns, French windows, marble jalis and doors of silver with spiral stairways along the four minarets. This three-storeyed structure gives the century-old monument a magical charm.

Most of the people who come to visit the Taj Mahal miss the smaller red sandstone replica in the same city. The Red Taj is the tomb of a Dutch soldier and trader, John William Hessing, which was built by his wife in the year 1803 following his death during a war between the Marathas and the British.

Red Taj is one fifth the size of Taj Mahal, but, is a very modest structure with no mosaic works or fine inlay like the marble one. However, at its entrance, one would come across two Persian inscriptions, one is an epitaph and the other a chronogram. The epitaph expresses the sorrow of his wife, Ann Hessing and the scars caused by separation; whereas, the chronogram showcases the year of his death.

Referred to as the poor man's Taj Mahal, Bibi Ka Maqbara was commissioned by Aurangzeb and dedicated to his wife, Rabia Durrani. The structure is constructed out of white marble like the original one, but is not studded with semi-precious stones. With landscaped gardens, fountains and broad pathways, Bibi Ka Maqbara comes closest to the original out of all the lookalikes and was built by Aurangzeb's son, Azam Shah, in the 1650s.

K. Chhawnthuama is considered as the modern day Shah Jahan of Mizoram. To immortalise his wife after her death, he built a monument in her honor and named it K V Paradise. The structure is more like a well-maintained church rather than a Mughal mausoleum; however, locals fondly address the structure as Mizo Taj.

Located atop the Durtlang Hills, the place offers brilliant views of the surroundings. Inside, in glass cabinets, one would come across a life-size painting of his wife along with her dresses, shoes and the clothes she was wearing when she died.

Comments
Read more about: travel india monuments agra taj mahal
Other articles published on Nov 21, 2017
We use cookies to ensure that we give you the best experience on our website. This includes cookies from third party social media websites and ad networks. Such third party cookies may track your use on Nativeplanet sites for better rendering. Our partners use cookies to ensure we show you advertising that is relevant to you. If you continue without changing your settings, we'll assume that you are happy to receive all cookies on Nativeplanet website. However, you can change your cookie settings at any time. Learn more
Change Settings Continue