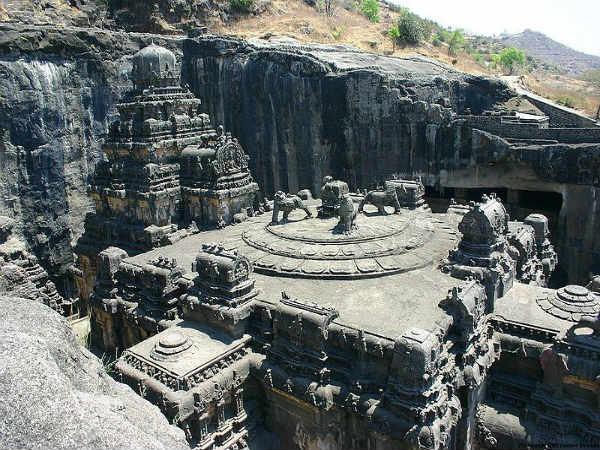 In these times, skyscrapers and exotic buildings are a common sight. They don't look special even with such elaborate designes but it is not the same with ancient temples. In fact, it is mind-blowing that they are built without any advanced machinery. Kailasa temple is one such architecture which is carved out of a single rock in Ellora.

Kailasa Temple is one among the 34 rock-cut temples in Ellora caves. Situated in the city of Aurangabad, this cave temple is a beauty. This megalithic temple is believed to have sculpted out of basaltic rocks in 8th century. The structure follows the Dravidian style of architecture.

Kailasa Temple was built by the King Krishna I of Rashtrakuta Dynasty. It is also believed that the shrine was constructed as a replica of Shiva's abode in Mount Kailash according to Hindu mythology.

It is said that, it took around 20 years to construct this temple. Archaeologists also believe that they've have used 3 kinds of chisels to create this design. This Cave 16 (Kailasa temple) has undergone vertical excavation and that explains its overall frame.

Facade: The entrance is full of exotic carved structures along with large pillars. The inner yard is constructed in 'U' shape that looks spacious. You can also understand that the carvings on the pillars are depicting the mythological stories.

The front yard of the sanctum contains the big sculptures of goddesses and a Nandi (bull) in front of Shiva Linga. A prominent element of this temple is the sculpture of an elephant; an optical illusion makes us believe that the whole temple stands on this elephant.

Another view of the temple
Photo Courtesy: G41rn8

Interior Design: One can see small pillars, exotic carvings and windows inside. In the heart of the shrine is the inner sanctum which has Linga (symbol of Lord Shiva).

Kailasa Temple is one of the must visit sites in Ellora caves. If you're planning a trip there, please visit these rock-cut temples along with several other tourist places in Aurangabad.