Nativeplanet
»
Travel guide
»Into The Wild At Periyar National Park

Into The Wild At Periyar National Park 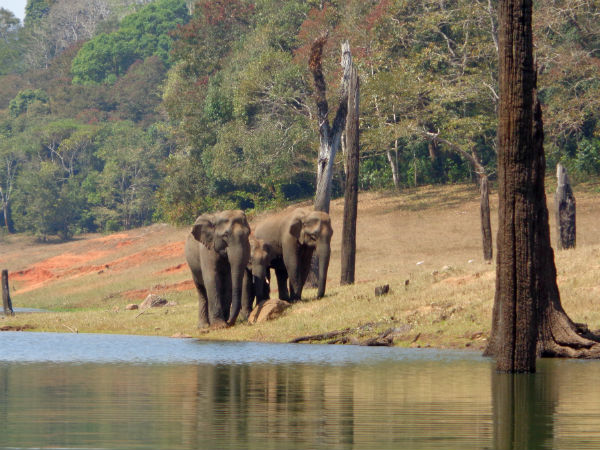 The sanctuary is spread over 3 districts of Kerala namely Idukki, Pathanamthitta and Kottayam. The rivers Periyar and Pampa, and Periyar Lake form the major water sources in the sanctuary.

PNP is located in the Cardamom and Pandalam hills to the south of the Western Ghats and Tamil Nadu lies to the east of the sanctuary. The sanctuary has varying elevations with a range of peaks and mountains situated in the park.

Periyar means big river and as one of the biggest rivers and lakes of Kerala is situated in this wilderness, it's only fitting these are named Periyar. The Mullaperiyar Dam is one of the oldest masonry dams in Kerala built towards the end of 19th century and is in use even today to provide water to the states of Kerala and Tamil Nadu.

The area rich with wild animals was a favourite amongst the royal families for hunting and was soon declared a game reserve in the early 20th century. Towards the end of the 20th century and the beginning of the 21st, more attention has been given to the protection and poach-free raising of tigers and elephants in the sanctuary.

Things To Do In The Sanctuary

The whole sanctuary is a rich land of various types of flora and fauna. It is surrounded by tea, coffee, and cardamom plantations. The park has ecosystems of tropical, deciduous and grasslands with trees like mango, sandalwood, teak, and bamboo being amongst the common ones.

Animals like the Bengal tiger, Indian elephant, Nilgiri langur, gaur bison, along with birds like parakeet, hornbill, Sunbird, flycatcher, owls, eagles and storks, and many reptiles like king cobra can be sighted in the reserve.

The best way to catch a glimpse of the animals and explore the sanctuary as much as possible is to take a safari, which is the major tourist attraction in the sanctuary. The safari can be done in 3 different ways, i.e., a jeep safari, a boat cruise and an elephant safari. The elephant safari and boat cruise have regular interval services during the day; the jeep safari is exclusively available as a night service.

The entrance, bus ride from the entrance to the boat landing, boat cruises and safaris all have individual fees, so always carry enough loose cash on you.

The best time to visit Periyar Wildlife Sanctuary is October to February when the weather is pleasantly cold.

How To Reach Periyar Wildlife Sanctuary

The closest town is Kumily in the Idukki district of Kerala. Due to its proximity to the sanctuary, one can even walk from the Kumily bus stand to the Thekkady Boat Landing point which is only 5 km away.

By Air: Kochi airport in Kerala at 160 km and Madurai Airport in Tamil Nadu at 150 km are the nearest airports.

By Road: Kumily town lies as a junction of various state and interstate highways, namely Munnar-Kumily highway, Kollam-Theni highway and Dindigul-Theni-Kottarakkara highway with a major KSRTC bus stand there.

Kumily has a wide range of affordable and luxurious hotels, guest houses and resort options to stay at.

Comments
Read more about: wildlife nature kerala idukki kottayam
Other articles published on May 20, 2018
We use cookies to ensure that we give you the best experience on our website. This includes cookies from third party social media websites and ad networks. Such third party cookies may track your use on Nativeplanet sites for better rendering. Our partners use cookies to ensure we show you advertising that is relevant to you. If you continue without changing your settings, we'll assume that you are happy to receive all cookies on Nativeplanet website. However, you can change your cookie settings at any time. Learn more
Change Settings Continue