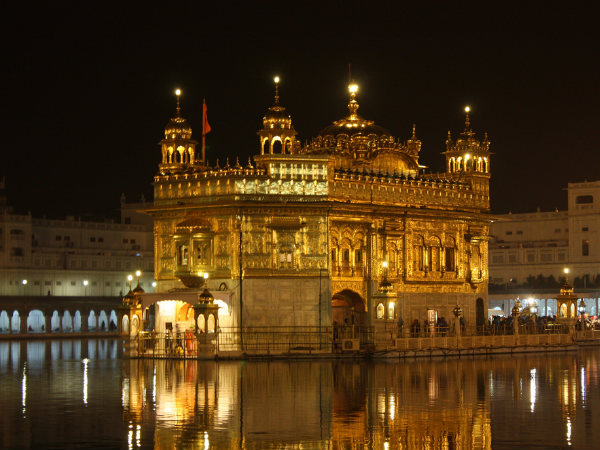 The Golden Temple in Amritsar is one of the famous temples in India that sees a rush of devotees, travellers and tourists from across the globe. Being a major Sikh pilgrimage site, this site has made the city of Amritsar even more popular with its sublime aura.

Let's get to know some interesting facts about Golden Temple in Amritsar.

1. The Foundation Stone
The foundation stone of the Golden Temple was laid by a Sufi saint Sai Hazrat Mian Mir.

2. The Name of the Temple
The Temple gets its name from the outer covering of gold on the temple, which was added to the marble structure by Maharaja Ranjit Singh around 200 years after the construction. The temple was otherwise called as Darbar Sahib or Harmandir Sahib.

An entrance of the temple
Photo Courtesy: Rakesh

3. Amrit Sarovar
Amrit Sarovar, which means 'The pool of nectar' is one of the main attractions of the Golden Temple. The pool is believed to have medicinal properties. Devotees wash their hands and feet, and sometimes take a dip in the pool before entering the temple.

4. Four Entrances
The temple has four entrances facing the East, West, North and the South. This indicates that the temple welcomes devotees and other people from all parts of the world. Devotees from any religion, caste and creed are allowed inside the temple.

5. Largest Langar Seva
The Golden Temple organises the largest langar sewa in the world. It serves around a lakh devotees daily.

6. Stairs to the Temple
The stairs that enter the temple go downwards, unlike other temples where there are stairs to be taken up to the main temple. This is designed in this way to symbolise the humble way of living.

7. Equality of Devotees
While food is served, all the devotees sit together in rows on the floor, irrespective of their religion, caste or creed. All the devotees are considered equal here.

Some of the places that are worth visiting near the Golden Temple include the Wgah Border, Durghania Temple, Bathinda Fort and Rambagh among the rest.