Nativeplanet
»
Travel guide
»Haridwar To Spiti, ‘A World Within A World’

Haridwar To Spiti, ‘A World Within A World’ 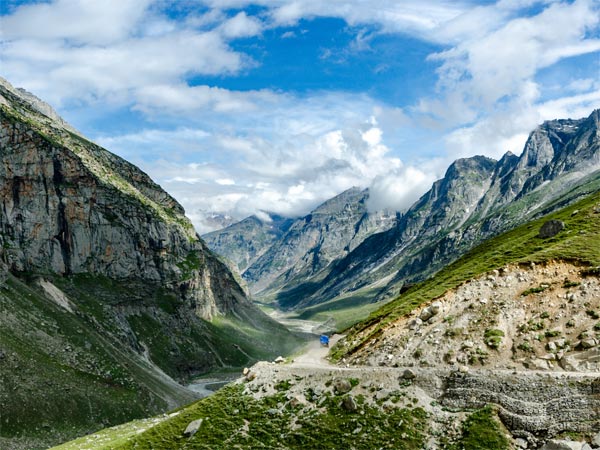 My mother had a long-standing dream of visiting Haridwar, the holy city in Uttarakhand. Though I am not religious, I love visiting temples and churches to look at the beautiful architecture and the culture display. So, as a family, we set off to Haridwar with my grandparents too.

My sister and I planned to extend the holiday and visit Spiti Valley in Himachal Pradesh. Haridwar is a religious destination propitiously situated at the point where River Ganga, aka Ganges, emerges from the Himalayas. 'Hari' meaning God and 'Dwar' meaning gateway; Haridwar is rightly named so.

It is a gateway to the four pilgrim spots of Uttarakhand namely Badrinath, Kedarnath, Gangotri and Yamunotri. Kumbh Mela, the festival that is held once in 12 years, is held in 4 venues, of which Haridwar is one. Haridwar sees droves of visitors and pilgrims from all over the world to take a dip in the holy Ganges.

May to October is peak season in Haridwar, when hundreds of devotees of Lord Shiva descend upon the city. We took a flight from Bangalore to Dehradun. It was a 4-hour flight, with a stopover at Delhi. From the Jolly Grant Airport in Dehradun, we took a taxi to reach Haridwar, which is about 55 km away. We reached Haridwar in about 1 h 45 min. It was a 6-day tour filled with fun, excitement and devotion, which left us in good spirits at the end of the journey.

We settled in our hotel room and after a few precious winks, we set out towards Har Ki Pauri, on the sacred Ganges. We managed to have a scrumptious breakfast of poori-aloo and jalebis on the way.

The streets leading the way are filled with tiny shops selling sweets, food, clothes, souvenirs, etc. Har Ki Pauri is the famous bathing ghat on the Ganges. It is believed by the Hindus that a dip in the river at the ghat will wash them off their sins.

A Travel Guide To Haridwar

The ghat has changing rooms and storage room facilities for those who wish to take a dip in the river. If you expect a peaceful setup where you can offer your prayers after taking a dip, let me tell you; it is anything but peaceful. It is a very chaotic environment with people shouting, priests performing poojas, and releasing flowers and incense sticks in the water.

I took a quick dip and moved to offering obeisance to the gods in the many temples dotting the ghat. We were tired by now and were ravenously hungry. Thankfully, Har ki Pauri has a number of food stalls where we could choose to eat from. We had a tall glass of lassi and dal ki kachori.

I wish my dietitian would be okay with me eating this for three meals a day; because it was THAT delicious. We walked back to the hotel room and took a nap to rejuvenate ourselves. In the evening, we set out to watch the Ganga ki Aarti, which starts at sunset. Devotees light the lamps and offer prayers to Goddess river Ganga.

We arrived quite early and found a perfect spot to view the aarti. It was quite a sight to see 21 pooja aartis rotating simultaneously, in perfect synchronisation with the chanting of hymns and resounding ringing of bells. My mother was visibly contented. We had our dinner at a small restaurant, retired to the hotel room and called it a night.

We started to Manasa Devi Temple after breakfast and were informed by the hotel personnel that it can be reached by cable car/ropeway too. Since we had our grandparents along, who cannot walk long distances, we chose to use this service.

This temple is one of the most important temples in Haridwar. It is the holy abode of Goddess Manasa, a form of Shakthi. She is said to have emerged from the mind of Sage Kashyap. The word "Manasa" means "wish". It is believed that the Goddess grants the wishes of the devotees.

After the chaotic experience at the ghat, I expected some serenity at least at the temple. Again, I was disappointed. We were asked to quickly make a prayer and were herded onwards. We saw that many people were buying a thread to tie on the branches of the holy tree inside the temple. We got to know it is a belief that it helps in fulfilling the wishes.

In the evening, we visited Bara Bazar, which is the largest market in Haridwar. After picking up some souvenirs, my sister and I left to Dehradun to catch a flight to Delhi. My parents and grandparents were to fly to Bangalore the next day.

We took a flight from Delhi to Kullu. We reached Kullu in about 2 hours. After refreshing a bit, we hopped on a bus to Spiti Valley. It was a bumpy ride of 6 hours, which left us bone tired when we reached Spiti valley. I have read that Rudyard Kipling described Spiti Valley as "a world within a world". How true is he, I thought as I stepped my foot down from the bus. The thought only firmly planted itself, as we discovered and explored more of Spiti Valley the following day.

Spiti Valley is situated at an altitude of 12,500 feet above the sea level. It is bound by Tibet in the East, Ladakh in the North and Kullu to the South. The best time to visit Spiti is from June to September. In fact, June and July witness the maximum number of tourists visiting Spiti.

5 Reasons Why You Should Head To Spiti Valley

Spiti valley is a cold mountain desert and we had come prepared to thrive here for a couple of days. We carried with us sunglasses, thick jackets, raincoat, waterproof shoes, high SPF sunscreen and sun hat. Most importantly, we carried enough water and medicines to deal with altitude sickness.

We had booked a homestay in Demul. It is a rural area; and it was a fascinating experience to live with the locals and eat local food. We also got adventurous and tasted the local alcohol. The bumpy ride left us exhausted and we drifted away to sleep the minute we got on the bed.

We woke up nice and fresh, cleaned up after ourselves and set out to Kaza in a bus. Kaza is the administrative capital of Spiti. It is the only place where we could find an ATM. We had lunch at Drag-On, a restaurant in Kaza and picked up dessert from German Bakery.

Post this treat, we took a bus to Kye Gompa, a Tibetan monastery located at 13,668 feet above the sea level. This monastery has a beautiful monastic architecture, adapted from the Chinese influence. It is a very serene place and we appreciated the peace very much, after the hectic trip from Haridwar. On the way back, we decided to try out the Yak ride instead of taking a bus. It turned out to be a memorable experience!

We had been acclimatised well to the altitude for the past 2 days. So, we decided to hike up to Lake Dhankar. Located at an altitude of 13,580 feet above sea level, this is quite an easy trek. We splashed around the cold water and played for a bit before starting our trek back to Dhankar.

There were many tea stalls there that sell tea made from yak milk. This was utterly soothing and delicious, I must say. We had the tea along with herbed butter buns. We went to the homestay and called it a day.

Day 6: Bus To Kullu And Back Home

On this day, we gave our homestay hosts little presents as a thank you gesture and headed on a bus to Kullu. From Kullu, we took a flight to Delhi and then to Bangalore. It was an extremely exhausting and hectic journey. However, the memories from the splendid trip kept us in good spirits till we got home.

Comments
Read more about: haridwar spiti uttarakhand dehradun travel temple kullu mountains himalayas
Other articles published on May 31, 2017
We use cookies to ensure that we give you the best experience on our website. This includes cookies from third party social media websites and ad networks. Such third party cookies may track your use on Nativeplanet sites for better rendering. Our partners use cookies to ensure we show you advertising that is relevant to you. If you continue without changing your settings, we'll assume that you are happy to receive all cookies on Nativeplanet website. However, you can change your cookie settings at any time. Learn more
Change Settings Continue