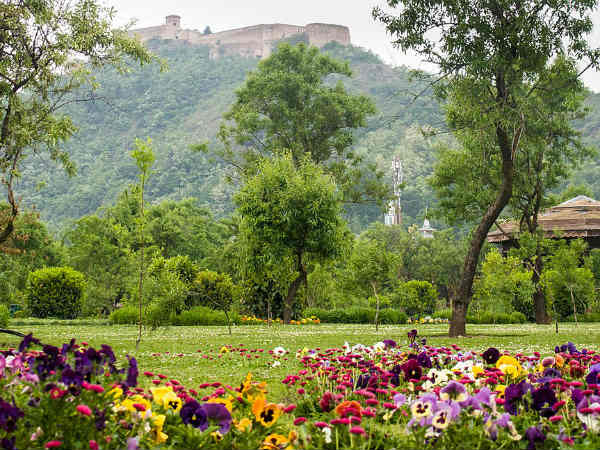 It is certainly not a new thing for Jammu and Kashmir to host wondrous beauties and therefore, Hari Parbat in Srinagar is no exception. Famous for its beautiful surroundings with the presence of forests, gardens and luxuriant plains, Hari Parbat is a pilgrimage destination and is frequented by thousands of tourists every year.

However, the astonishing beauty of this mesmerising hill lies in its lush greenery and unpolluted atmosphere, which in turn, attract hundreds of nature lovers as well as photographers. If you are looking for an unexplored destination on the heavenly land of Jammu and Kashmir, then you must visit Hari Parbat.

Apart from learning about its history and religious significance, you can also savour its composed and peaceful environment, which you cannot find everywhere in Srinagar. Let's move on and learn more about this beauteous expanse.

Being a part of Srinagar in the state of Jammu and Kashmir, Hari Parbat experiences a moderate type of climate throughout the year and hence, it can be visited anytime during a year. However, most of the tourists prefer visiting Hari Parbat during the months of March and April when the temperature is optimum and the climate is cool and pleasant.

A Little About Hari Parbat's History And Location

Hari Parbat is located in Srinagar at a distance of about 5 km from the city centre and is famous amongst tourists and the locals as a prominent religious site. It is home to Sharika Devi Temple, which is dedicated to Goddess Jagdamba, a form of Goddess Shakti and hence, it is visited mostly by Hindu devotees. However, it is also home to a Muslim shrine and a gurdwara, thereby, representing secularism in the region of Srinagar.

The history of Hari Parbat stretches back to the Mughal Era, when the Mughal King Akbar was planning to change his capital city to Hari Parbat in Srinagar during the 16th century. However, the plan could not be carried out. Later on, it came under the rule of Durrani Empire in the early 19th century, when he built the present Hari Parbat Fort. Today, Hari Parbat is more of a religious site and is least-visited by history lovers. However, the ruins of the fort still tell interesting tales of Hari Parbat.

What's So Special About Hari Parbat

Where else in Jammu and Kashmir can you see such an amazing place which has been representing secularism for decades? You cannot find such a beautiful mix of a Hindu, Muslim and Sikh shrines everywhere in the country. Hence, it holds a special place in the hearts of every local as well as tourist. Being a hill covered with lush greenery, it is also a perfect weekend stoppage for picnic lovers and photographers. You can also visit the nearby Dal Lake, almond gardens and the ancient Kathi Darwaza.

How To Reach Hari Parbat

By Air: Srinagar has its own airport and hence, you can take a direct flight from other major cities of India. Once you have reached the airport, you can hire a cab to Hari Parbat. The distance between Hari Parbat and Srinagar Airport is about 16 km. Hence, it will take you an approximate time of 30 min to reach your destination from the airport.

By Rail: Srinagar is well connected to other major cities and towns by rail and therefore, you can catch a direct train to Srinagar railway station, which is located at a distance of about 17 km from Hari Parbat.

By Road: The region around Hari Parbat has a good road connectivity. Hence, you can easily approach it by road.