Gujarat - The Grandeur of Gandhi 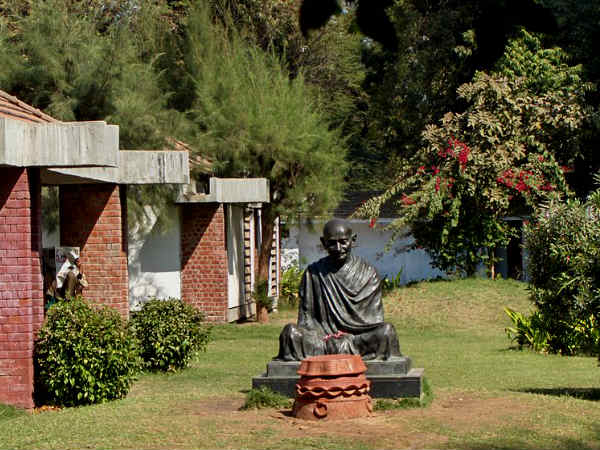 Gujarat is proud to be the birthplace of Mahatma Gandhi, India's Father of the Nation. Today the state has conserved Gandhiji with museums, statues, ashrams and much more. Gandhiji was born on October 2, 1869 in Porbandar.

Going back to history, Mohandas Karamchand Gandhi was a major spiritual and political leader of India. Popularly known as Mahatma, Bapu and Gandhiji in India, Mahatma Gandhi is reserves as the father of the nation.

Travellers who wishe to learn more about the life of Mahatma Gandhi should visit Gujarat. This is the place where he was born and started movements that forced British out and gave India independence. ALSO SEE: Gandhi Jayanti Quiz: How Well Do You Know The Mahatma? Take This Quiz!

Let us read about some of the interesting sites related to Mahatma Gandhi in Gujarat.

Thousands of tourists visit Kirti Mandir in Porbandar, the house of the Mahatma and his wife Kasturba. Kirti Mandir has a Gandhian library and prayer hall. This place has been turned into a small museum, which contains old exhibits and photographs of Gandhiji. Some of his rare personal possessions are also displayed in the museum.

Tourists should visit Gandhi Ashram just in the outskirts of Ahmedabad on the banks of Sabarmati river. The ashram was home of Mahatma Gandhi for several years. One can get in-depth view in the daily life of Gandhiji and his movements at the ashram. Gandhi Smarak Sangrahalaya, a museum in the ashram reflects the life of Mahatma with paintings, literature and some hand-written letters by Mahatma Gandhi himself. Another must visit site near Ahmedabad in Kochrab Ashram near Palid. The ashram was founded by Gandhiji. This ashram played important role in Indian Independence movement.

Another important attraction while on a Gandhi Circuit is Rashtriyashala in Rajkot. It was set up by Mahatma Gandhi in 1939. This institute incubated the values of Swaraj and pride leading to freedom from the colonial rule. Kaba Gandhi no Delo is another place to visit in Rajkot. The place was home of Mahatma Gandhi's father. The house offers pictorial tour of Gandhi's life.

Gandhi Smriti in Bhavnagar is another major attraction of Gujarat which is about 175 km from Rajkot. Regular bus services are available to travellers from Rajkot to Bhavnagar. Gandhi Smriti, a memorial in remembrance of Mahatma Gandhi. There are two museums, Barton Museum that displays archaeological remains of the region and Gandhi Museum with some interesting insight on his life.

Another important site near Surat is the Dandi, a historic site where Dandi March or Namak Satyagraha was ended. The Dandi March was against the British monopoly on Salt. Mahatma Gandhi started a non-violent march from the Sabarmati Ashram in Ahmedabad and travelled all the way to the ocean town of Dandi, which is 390 km away, to produce tax-free salt. It took Gandhiji 24 days to reach Dandi. Thousands of people joined him in the march. Gandhiji produced salt at Dandi that forced the world to pay attention towards Indian Independence movement. After this movement, millions of Indians joined the Independence movement lead by the Mahatma Gandhi.